“Almost all contract soldiers are going to the border”: comments on social media shed light on Russian troop transfer 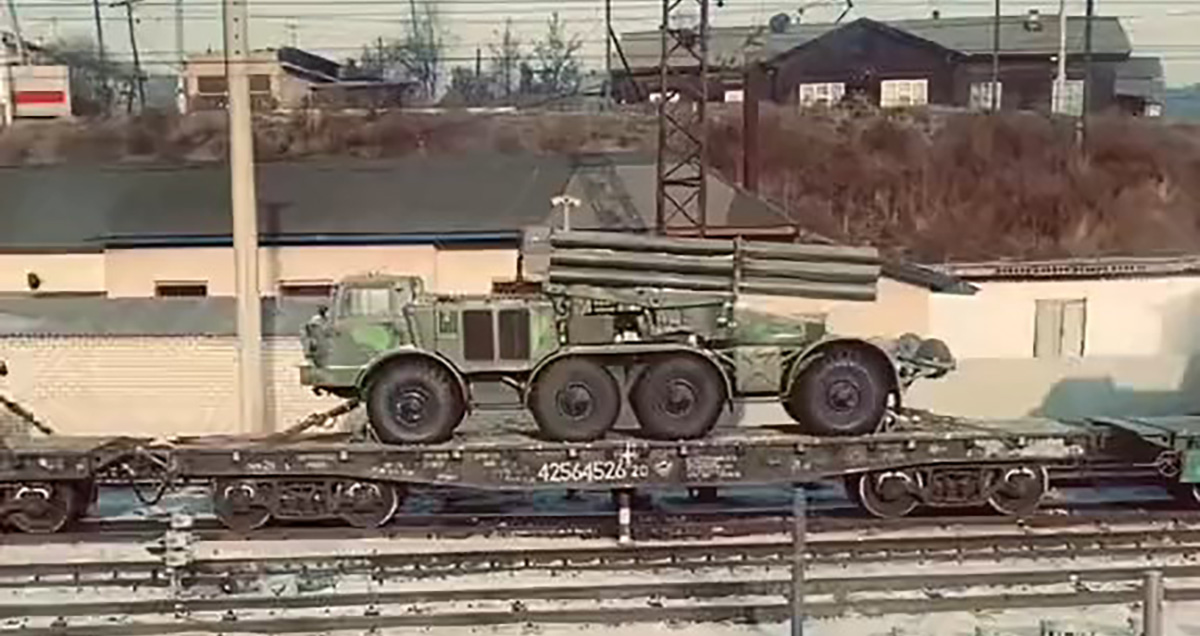 In our previous posts on Russian troop movements towards the Ukrainian border we noted that we observed a mass movement of vehicles, but not personnel. However, during the past few days we found lots of comments on TikTok, where users wrote on Russian contract soldiers (i.e. professionals, as opposed to draftees) being sent mostly from the Eastern military district either "on a business trip" or "to exercises''. Even though we can't unequivocally state that this is indeed a mass transfer of personnel (the soldiers could be sent over for vehicle maintenance or guard duties), we believe it necessary to cover those comments.

Note: almost all the comments cited in this article were found under three videos of military vehicles. Each of the posts had hundreds of comments, which we studied and verified. To ensure the safety of the commenters, we will not post links to the original videos, comments or user profiles. However, we are ready to provide the original, uncensored data to the media for verification.

This post is a collaboration with the RFERL's Russian service, their piece can be read here.

Some commenters "frighten" others by claiming that this is "more than a business trip": 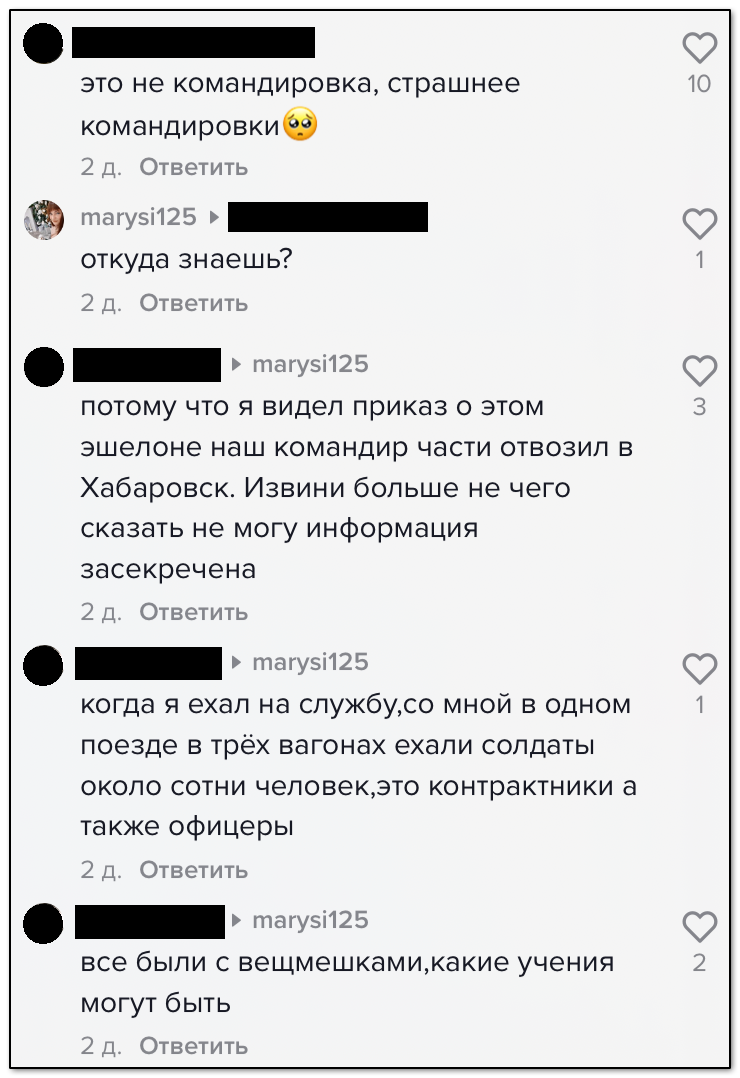 “That’s not a ‘business trip’, it’s worse”
“How do you know?”
“Because I saw the order on this train, the commander of our unit brought it to Khabarovsk. Sorry, I can’t say more, the information is classified”
“Three carriages of soldiers went on the same train as me, they were contractors [professional soldiers] and also officers”
“All of them had duffel bags, what kind of exercise could that be?”

However, in our experience "scare stories" like this appear regularly both during real exercises and during troop transfers under guise of "exercises" for future combat operations.

Similarly, many commenters cite their own sources saying that this is, indeed, just an exercise: 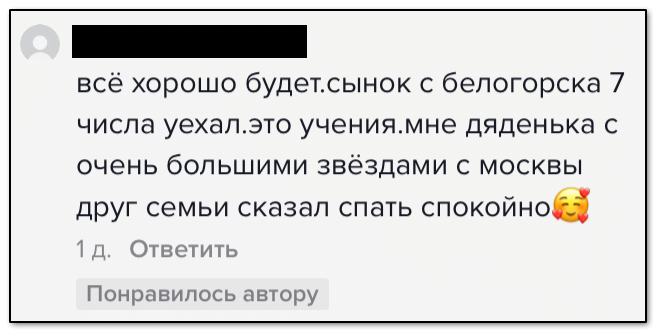 “All will be well. My son went from Belogorsk on the 7th. This is an exercise. A high-ranking military guy from Moscow, a family friend told me there’s no need to worry”

However, historical examples from Russia's 2014 incursion into Ukraine show that even soldiers who are directly engaged in a combat operation may be unaware that they are not on "exercise" any more up until the final roll call before the march into the war zone.

This is why we paid the most attention to comments that stated the specific units or locations from where the soldiers were heading off, as well as comments that suggest a close relation to the soldiers ("my son went", "my husband went", etc.). We matched these comments to the information we have on military trains and their points of origin.

The comment cited above mentions Belogorsk in the Amur region. Next to it is the base of military unit 53790 — the 54th Command and Control Brigade. A photograph of the arriving Russian troops posted by the Ministry of Defense of Belarus shows a carriage number. The Russian Railways database shows that the consigner of this carriage is the 54th Command and Control Brigade.

The Belogorsk unit is not the only CCB (Command and Control Brigade) sent to Belarus. In the first half of January, we observed several trains moving from Krasnaya Rechka station. Under one of those videos, a user left the following comment: 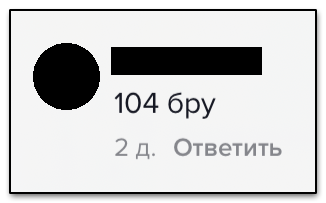 The 104th Command and Control Brigade is indeed close to Krasnaya Rechka station in the Industrialny district of the city of Khabarovsk.

“They are being sent not only from Khabarovsk, as a soldier’s mother, I am worried” 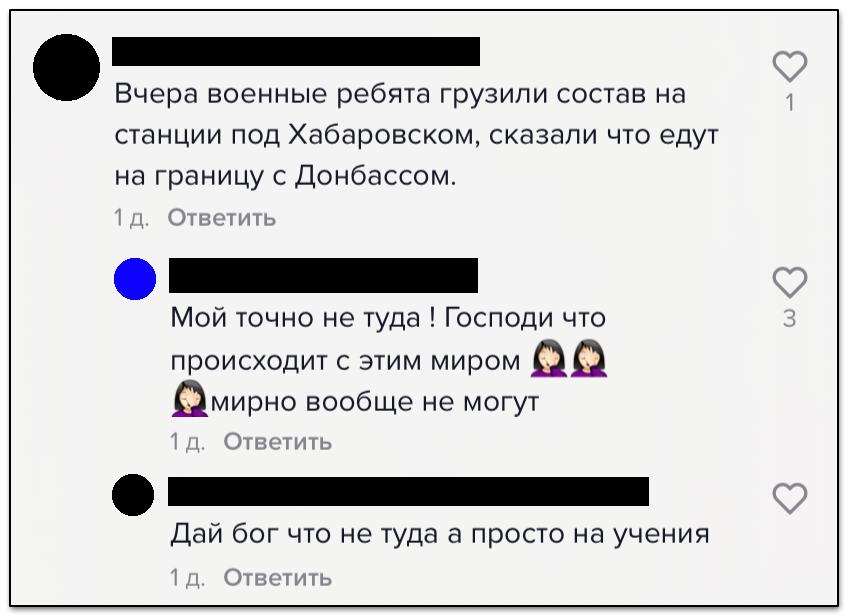 “Yesterday military guys were loading a train at a station near Khabarovsk, they said they were going to the border with Donbas”
“Mine definitely isn’t going there! Oh God, what’s happening to this world… they can’t live in peace at all”
“May it be not there, but just an exercise”

“Going to Kazakhstan, my son left from Khabarovsk today”
“No” 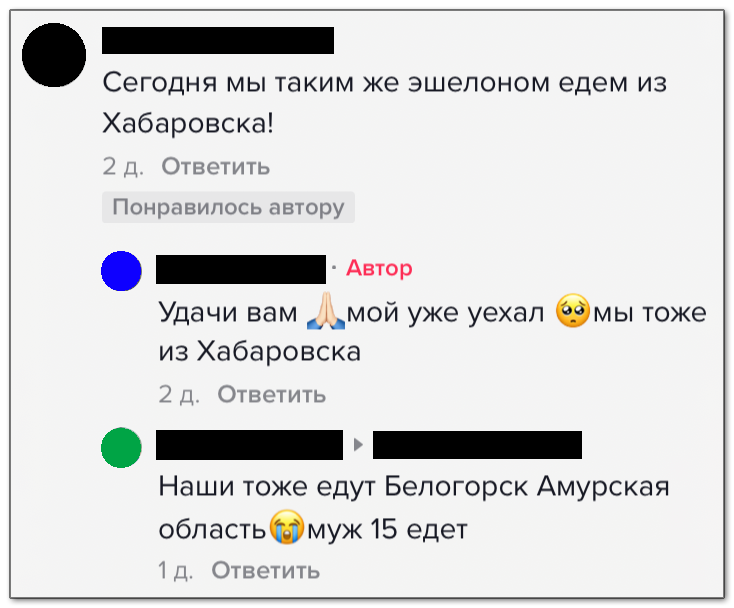 “Today we are going from Khabarovsk on a train just like this!”
“Good luck! Mine has already left. We are also from Khabarovsk”
“Our guys are also going. Belogorsk, Amur region :_( My husband is going on the 15th” 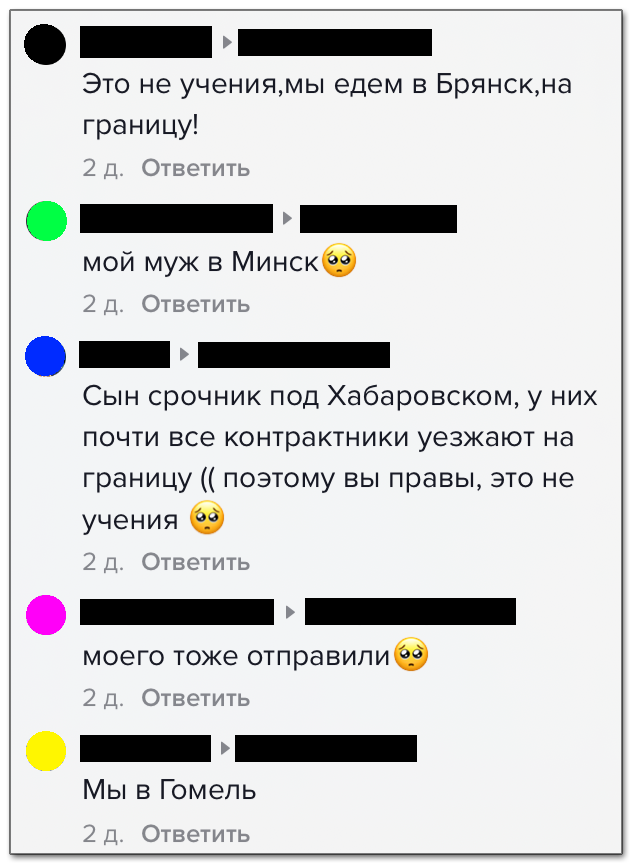 There are no airborne units in Khabarovsk, but it is the home base of the 14th Separate Guards Special Purpose (Spetsnaz) Brigade, whose soldiers wear the uniform of airborne troops. One commenter wrote that her boyfriend went to the 'business trip' and confirmed that he indeed served in the Spetsnaz. As the comment was left under a video of a train moving close to Khabarovsk, and the commenter herself is from Khabarovsk, it can be inferred that she also meant the 14th Spetsnaz Brigade. Earlier, we found several videos of vehicles common to Spetsnaz units (such as numerous GAZ-Tigr armored cars) being loaded or transported all trains. Some of the videos were filmed during loading in Khabarovsk, others — along the train's route across Siberia. 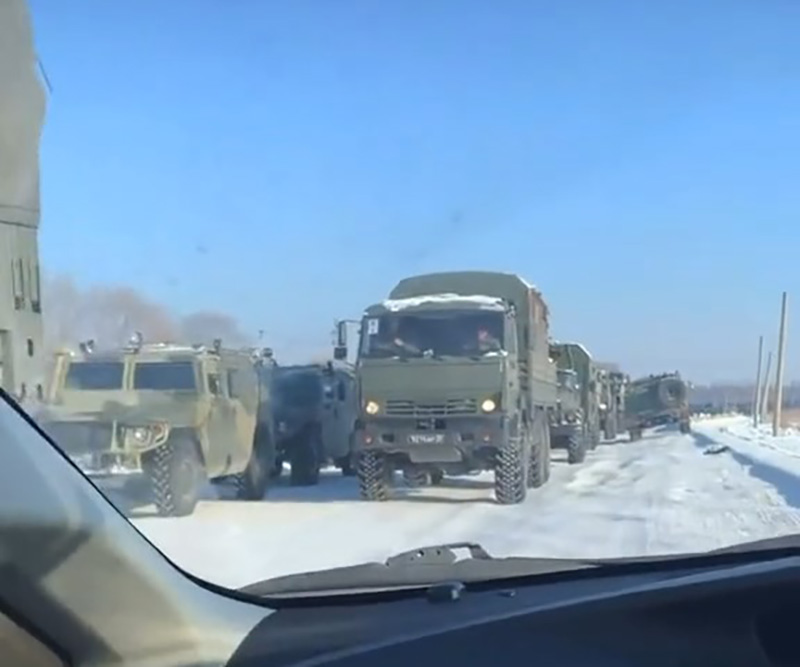 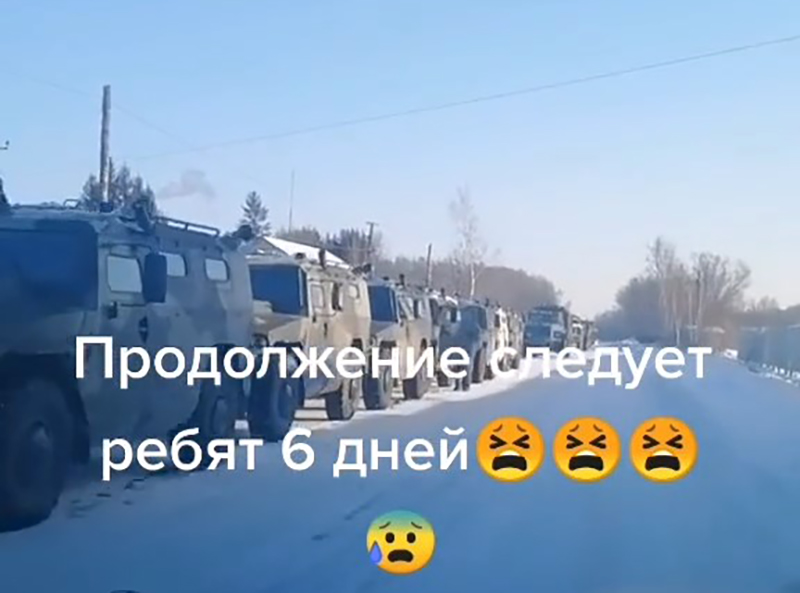 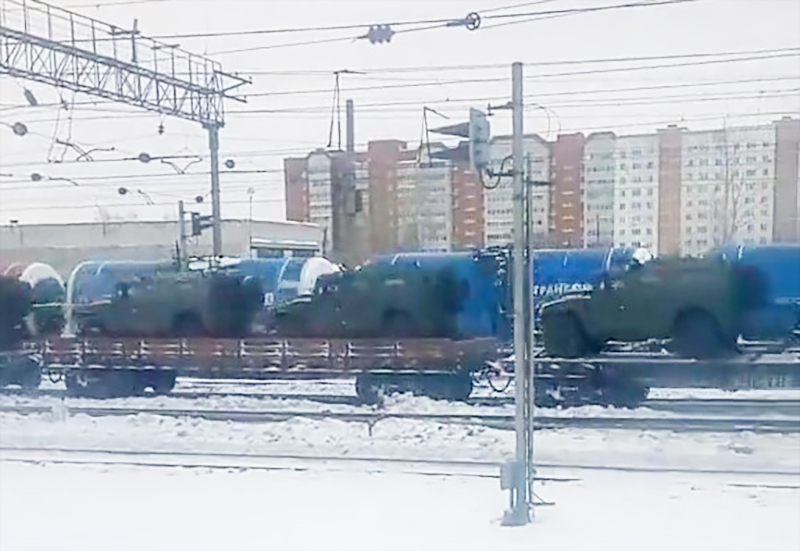 The comments above once again mention Belogorsk ("Our guys are also going from Belogorsk, Amur region, my husband is going on the 15th"). Apart from the aforementioned 54th Command and Control Brigade, Belogorsk also houses the 165th Artillery Brigade. Among other armaments, this brigade fields 9K57 Uragan multi-launching rocket systems.

Earlier we found a video of Uragan launchers on a train that, according to the Russian Railways database, went from a station in Belogorsk. 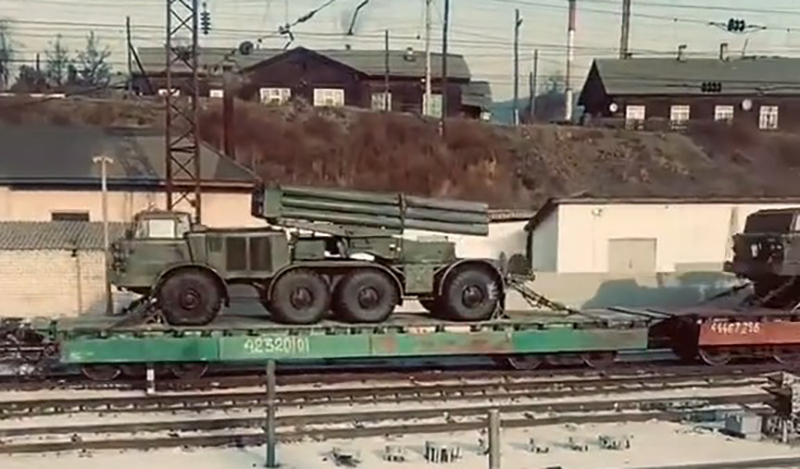 Yet another video of Uragan MLRS vehicles also has a railcar number. According to Russian Railways data, on January 14 the train was at Bryansk-2-Lgovskaya station, from where it went to Novobelitskaya station in Gomel, Belarus. Just before we published this article, a fellow researcher told us that as of December 31, the last publicly visible route of the carriage ended at Onokhoi station near Ulan-Ude, but we could not immediately find a unit in the area from which the MLRS could come from. 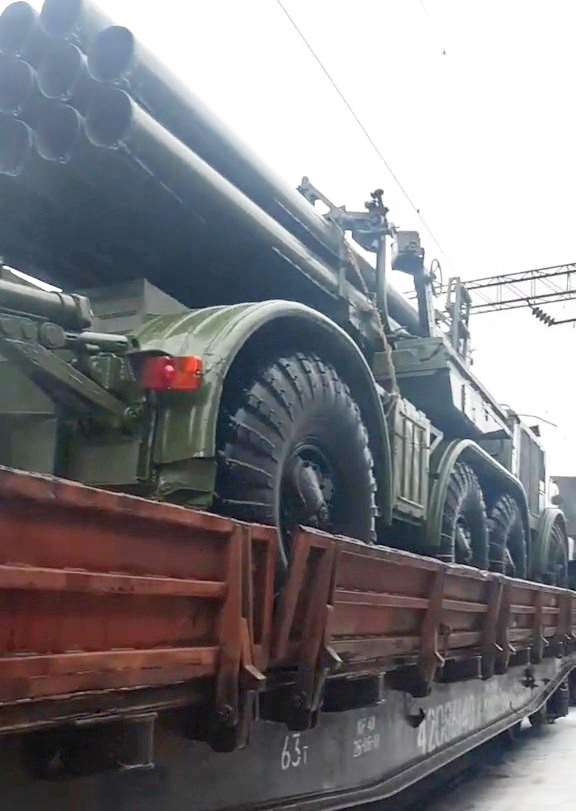 “Yes, this is a ‘business trip’, 700 men were sent for 6 months from Ekaterinoslavka, Amur region, to the Moscow region, my father is going there” 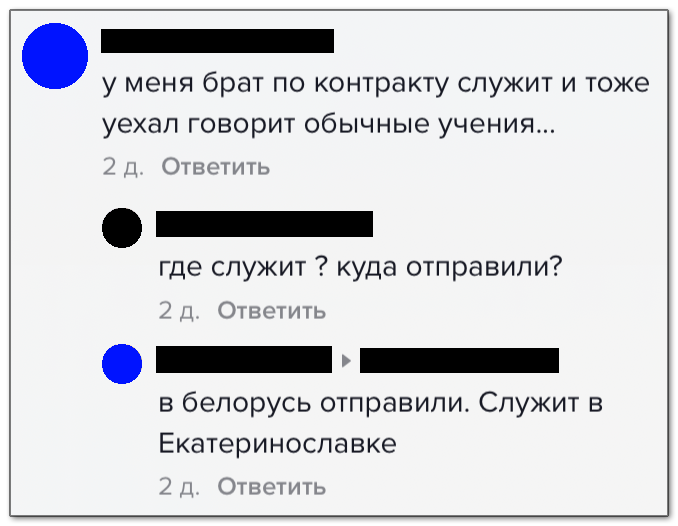 “My brother is a contract soldier, he was also sent there, he says it’s a normal exercise”
“Where is he serving? Where was he sent?”
“He was sent to Belarus. He is serving in Ekaterinoslavka” 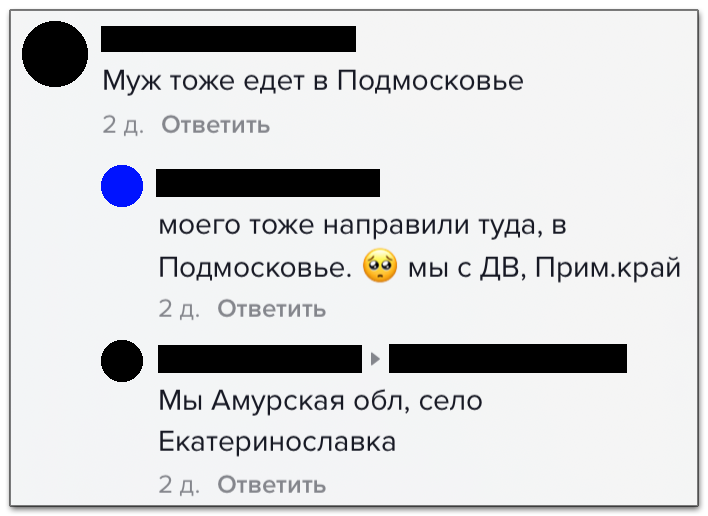 Near Ekaterinoslavka (Amur region) there is the base of the 38th Separate Motorized Rifle Brigade. We found several military trains which, according to Russian Railways data, went from Ekaterinoslavka station. Among these vehicles we found, for example, BM-21 Grad multi-launching rocket systems: 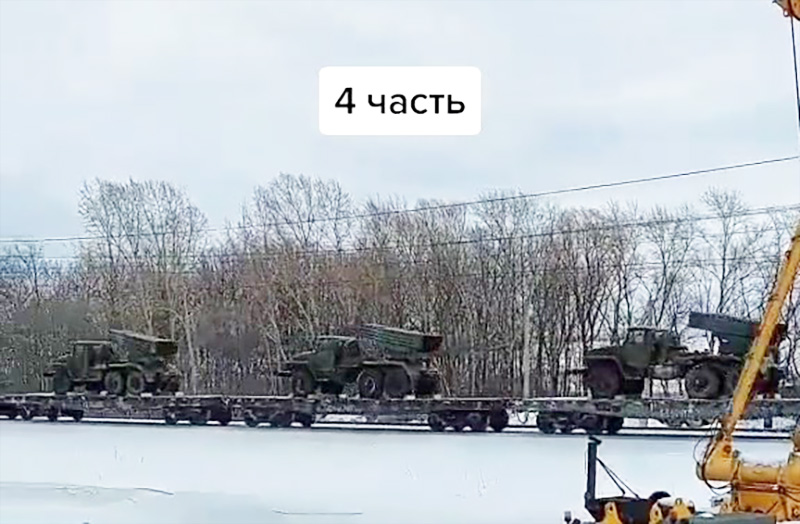 Another place name frequently mentioned in the comments is Mlechnik. This is the name of a military garrison in Knyaze-Volkonskoye, Khabarovsk region.

“My son is a contract soldier in Mlechnik, he is now going to a ‘combat business trip’ to Bryansk region. From there, we don’t know, they haven’t been told” 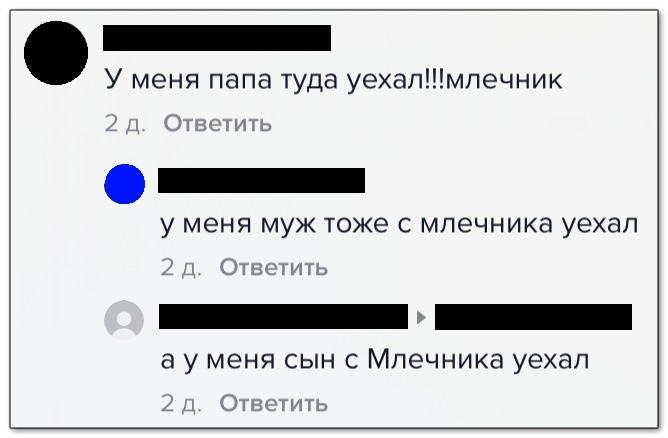 This is the base of the 64th Separate Motorized Rifle brigade. In 2014-2015 the brigade was already transferred to the Ukrainian border, while there were rumors among locals that the soldiers of the brigade were involved in the fighting.

One Russian military branch that was active in Ukraine in 2014-2015 was the Marines (in particular, there is ample evidence of the 61st Separate Naval Infantry [Marine] Brigade of Russia's Northern Fleet taking part in the fighting).

Now elements of the 155th Separate Naval Infantry Brigade of Russia's Pacific Fleet (headquartered in Vladivostok) are being transferred to the west. 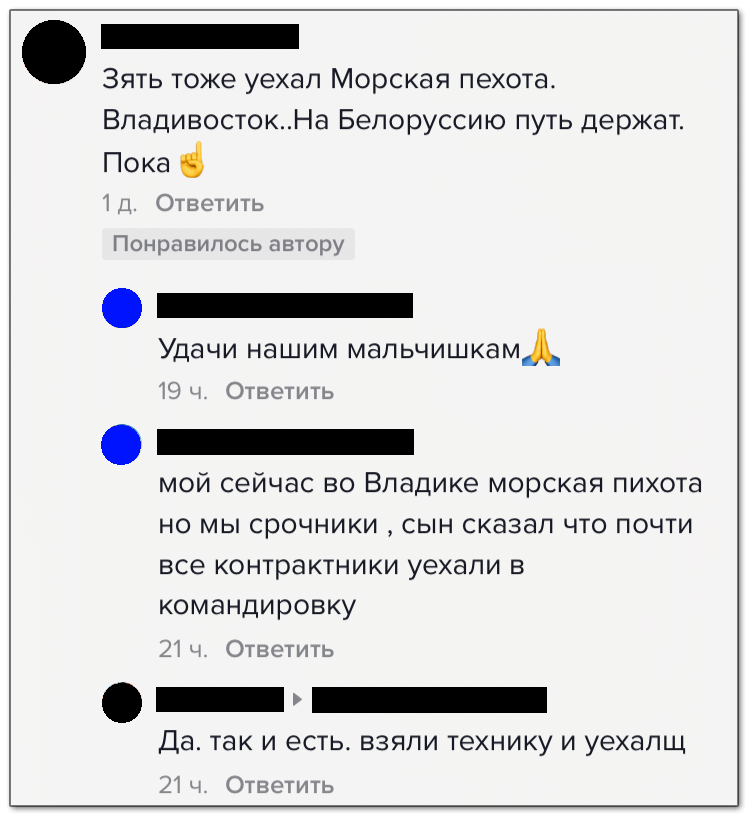 “My son-in-law also left. Marines. Vladivostok.. Heading towards Belarus. Bye”
“Good luck to our boys”
“My [son] is now in Vladivostok, marines, but he is a draftee. Son said that almost all contract soldiers went on a ‘business trip’”
“Yes, that’s the way it is. They took the vehicles and left” 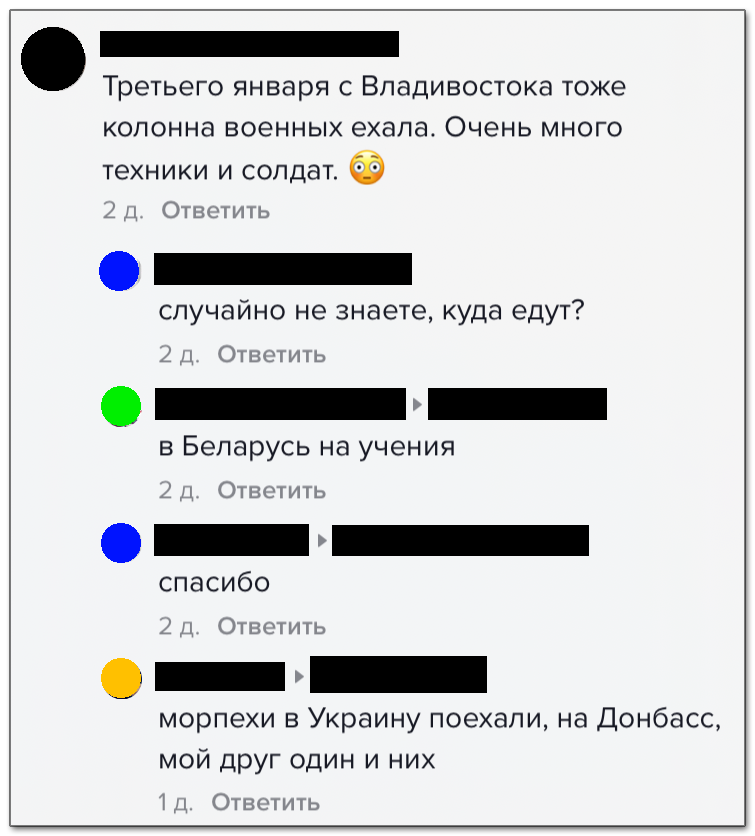 “On January 3, a military convoy also went from Vladivostok. A lot of vehicles and soldiers”
“Do you happen to know where they are going?”
“To Belarus, for an exercise”
“Thank you”
“The marines went to Ukraine, to Donbas, my friend is one of them”

Apart from that, one commenter confirmed to RFERL that a person close to her was serving in a marine air assault battalion and that he was being sent towards Ukraine

One commenter noted that he was among the soldiers who went off from Khabarovsk. He attracted our attention because his profile was full of personal photographs from his service, showing military police insignia and vehicles.

“We also went off from Khabarovsk ☺ Also got on TikTok ☺”

It should be noted that Russian military police patrols “unsafe” areas of Syria and could be used as an occupation force in Ukraine. However, military police may be routinely used in military exercises. Apart from that, we have not yet observed any transfers of military vehicles characteristic of the military police.

The comments cited in this post are confirmed by the following data:

The comments often contained suggestions on the numbers of the soldiers being sent west: "700 men", "almost all contract soldiers", "hundreds of soldiers" etc.

Such numbers of vehicles and soldiers could be explained by exercises, but the joint Russian and Belarusian exercise is officially scheduled from February 10th to 20th, while many comments mention that the deployment is to last for 2 to 9 months. 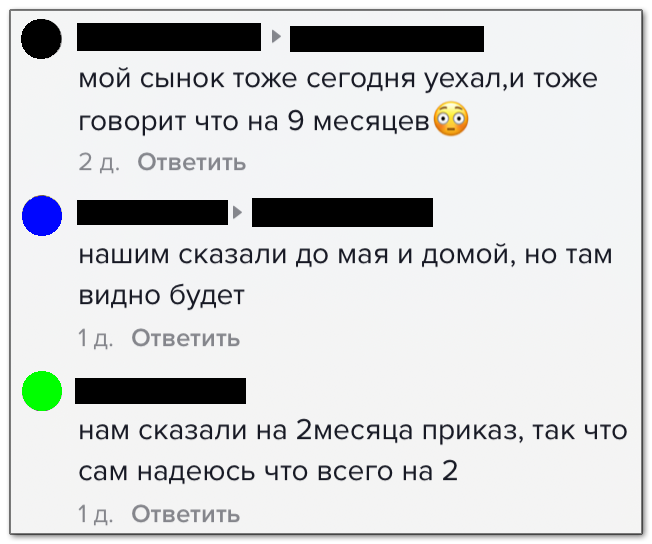 “My little son also went today, he also says they went for 9 months”
“Our guys were told they will stay there till May and then they’ll go home, but they’ll see”
“We were told the order was for two months, so I hope it will only be 2”

“To the border of Ukraine and Belarus, the guys were warned [that they would stay] for 9 months, contract soldiers”

As we noted earlier, some Russian vehicles are already deployed outside the training grounds officially engaged in the exercise.

All of the above suggests that at least some units of Russia's Eastern Military District are transferring a significant part of their personnel, and not just vehicles, towards Ukraine, and that the transferred elements of those units could stay in Belarus and/or western Russia for a relatively long period.

We will continue monitoring the situation and kindly ask to send your evidence to [email protected] or to @leviev on Telegram.