A several months long story is now over. Let me remind that on the 5th of May 2015 (when second part of Minsk agreement about the withdrawal of heavy artillery was already signed) three soldiers of the 16th separate Main Intelligence Directorate brigade (military unit 54607, located in Tambov) were killed. The names of the soldiers were:

We proved that all three of them were enlisted servicemen of Main Intelligence Directorate and geolocated a photo of one of the soldiers.

After the publication, we visited the hometowns of the servicemen together with SkyNews and met their relatives and friends. During the conversation, Timur Mamayusupov’s mother clearly stated that her son was not a volunteer, but a contract soldier and his contract was valid until 2016. She also mentioned that she received an official notification from the enlistment office that her son died during counter-terrorist operation in Northern Caucasus (despite the fact that we proved Timur had been in Luhansk).

Based on this information we sent this official request to Federal Security Service (FSB):

05.05.2015 three servicemen from 54607 military unit (16th separate brigade GRU, Tambov) died:
… [list of names and dates of birth] …
By communicating with their relatives we found out that they died during a counter-terrorist operation in Northern Caucasia. Please inform us if any counter-terrorist operations were conducted on the 4-5 May 2015 that caused the death of this soldiers.

At that time, the presidential order classifying the deaths of the military personnel as a state secret was not approved yet and I tried to formulate the request in a way that it would minimally involve any potential military secret, therefore I did not ask if they were on a contract, or how they died. The only question was just if there was any operation.

I sent this request to Federal Security Service, not Ministry of Defense because they are responsible for counter-terrorist operations — it is them who organize and command such operations.

The first reply I received was from the Federal Security Service Counterespionage Department. It stated that my request had been forwarded to the FSB Command of the Western military district: 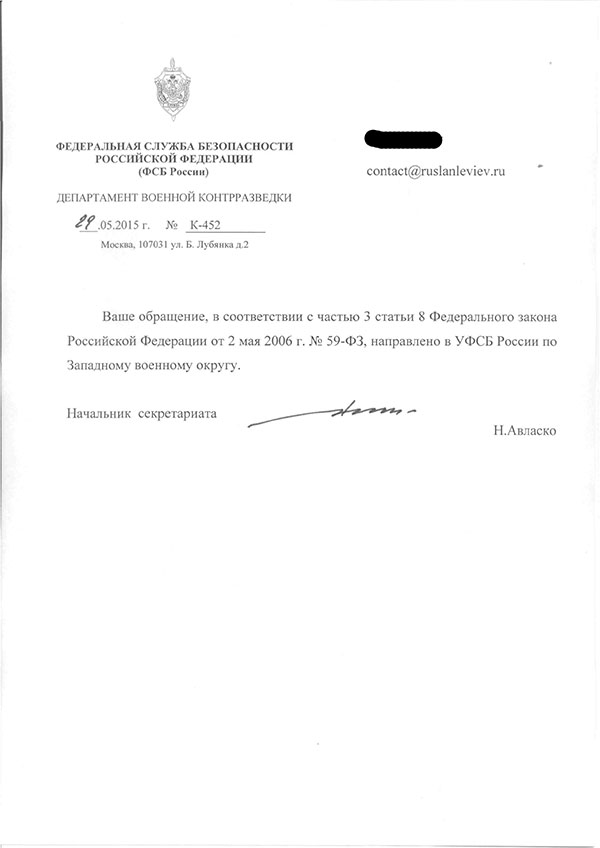 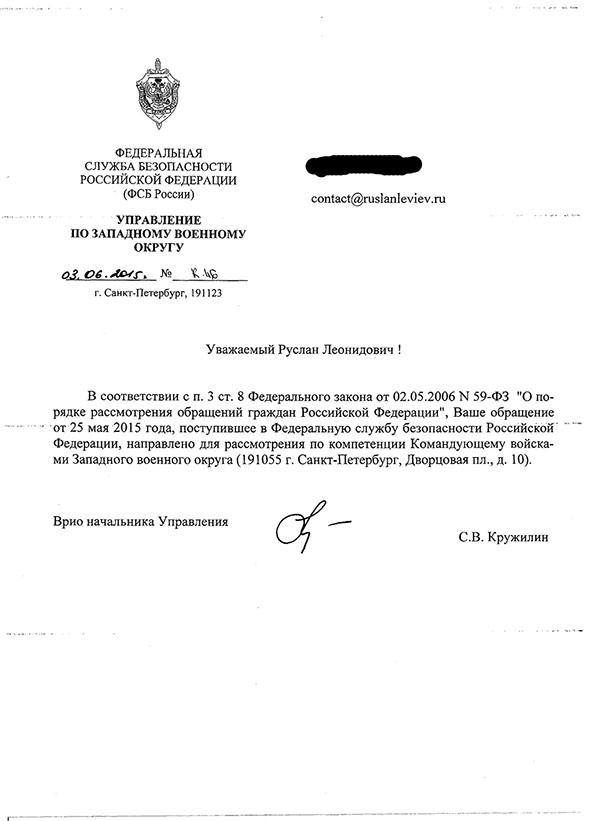 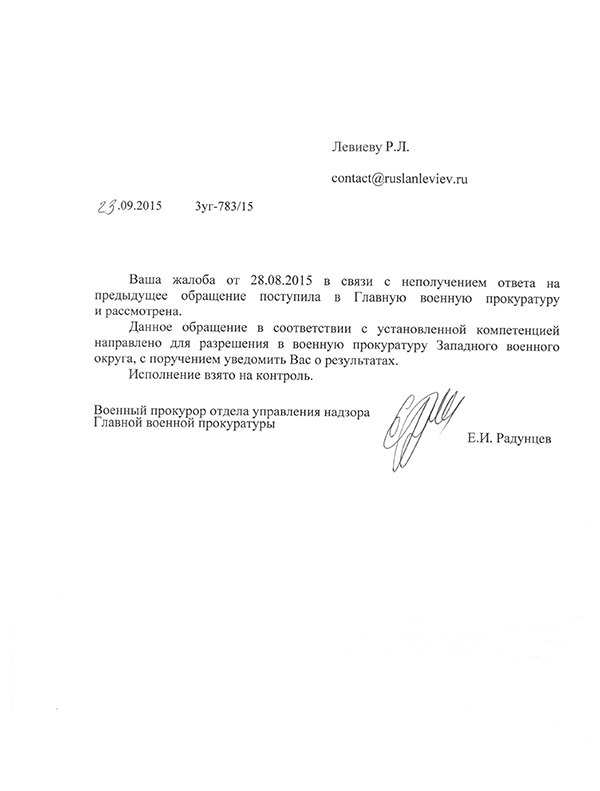 In late October, I received a letter from the Military Prosecution Office of the Western military district, where they claimed they needed additional information regarding my request. 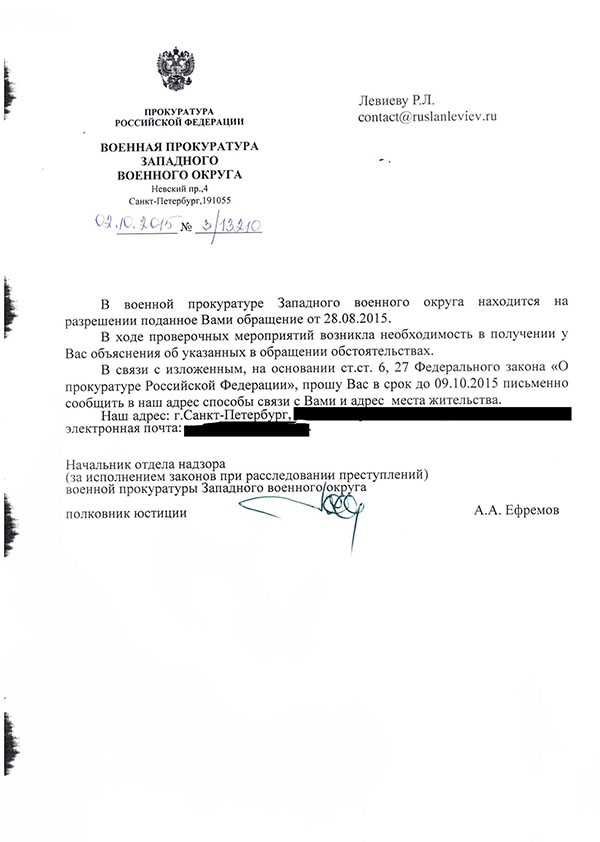 About a week ago I visited the Military Prosecution Office of the Western military district in Moscow, where I gave my explanations to the military prosecutor. The main topic of the questions was whether I understood that the information that I requested was classified and was not to be disclosed. I replied that I did, but still insisted on getting the answer. After the “official part” we had a discussion with the prosecutor regarding my arguments in the Supreme Court appeal against the presidential order on classifying military causalities during peacetime.

So, two days ago I received a reply from the Military Commander of the Western military district that the information that I requested was classified and coudln't be disclosed: 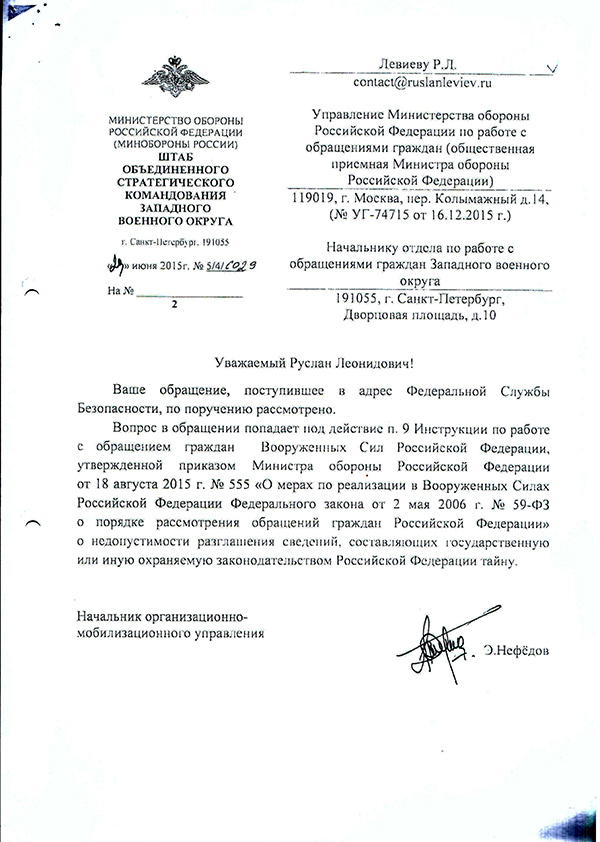 An interesting observation is that according to the document’s header it was prepared on the 23rd of June, meaning it took 4 months to email it. I would like to point out that only the casualties among the military personnel are considered classified and those of the volunteers, ex-soldiers and rebels are not. I consulted an attorney Ivan Pavlov, who said that it was not direcly implied by the document, but can be interpreted that way.

Considering that we had proven that one of the GRU servicemen was photographed in Luhansk, Eastern Ukraine, we believe this to be an official confirmation that a special operation was conducted there in spring 2015 and that during that operation, three special service of the Main intelligence Directorate(GRU) servicemen were killed.

With this, we consider the case of three GRU servicemen closed.