On October 20, Reuters reported that at least three Russians were killed in a shelling of their position near Nabi Yunis mountain in north-eastern Latakia. We also knew that on the day those Russians were allegedly killed the are was shelled with mortars by the 1st Coastal Division of the Free Syrian Army.

The Russian that was killed was called Vladimir Yurievich Rekushin, born on 19.10.1970. We started with looking for his and his relatives' profiles on social networks as well as reports of his death. But we couldn't find anything. He had no social network profiles. His date of birth suggested that even if the information on his death were true, he most likely was a volunteer. An age of 45 would be too much for a soldier, even a contract one.

Many of our colleagues conduct only Open Source Intelligence (OSINT), so in this case they would give up this case, failing to find any open source data. However, our team conducts not only open source intelligence, but also human intelligence (HUMINT), which implies using sources and field work.

The role of HUMINT in the Rekushin case

We started contacting the deceased's relatives and friends to find put more about the circumstances of his death. They told us he'd really died in Syria. He allegedly was recently "recruited" by a draft office and signed a year-long contract to fight in Syria. We realized that the relatives misinterpreted the "draft office" information, since the minimal contract term with the Russian army is 3 years. Besides, at 45 he wouldn't be able to sign a contract. However, we know that during the conflict in Ukraine draft centers in Russia did take part in recruiting volunteers and sending them to Eastern Ukraine, using their archives to call ex-servicemen.

Even though we were sure that Rekushin wasn't an active Russian serviceman, we did decide to gather more information about him. Many media are interested with sending volunteers to Syria, and here we thought we had an example of such a volunteer's death.

Our sources got as a photo of the coffin used to transport Rekushin back home to Kaliningrad: 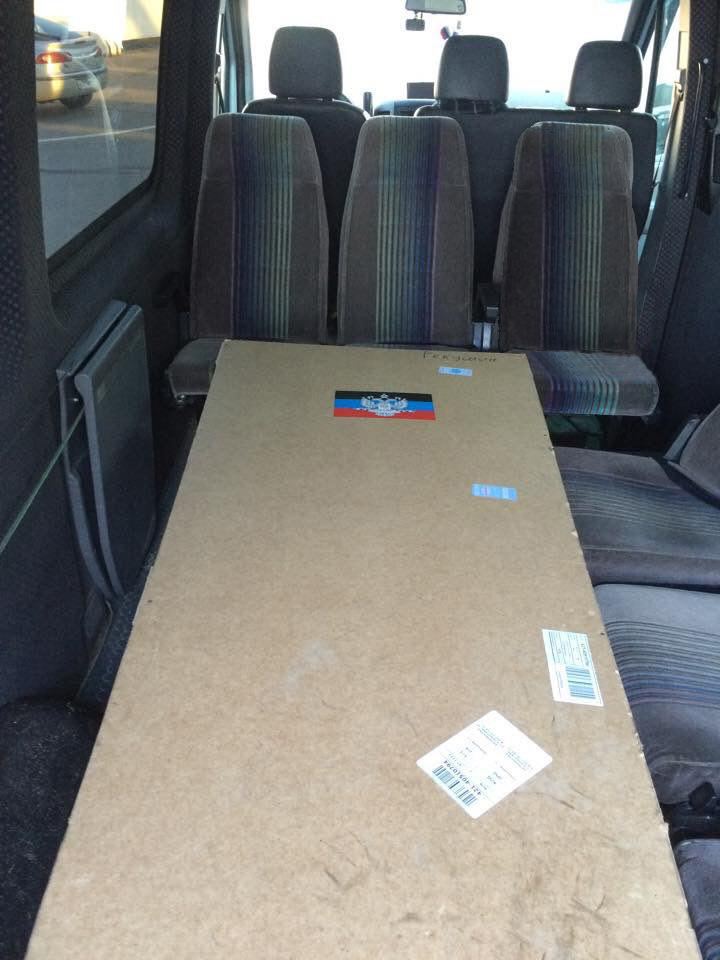 We can see that this is indeed his coffin since his last name is written on the upper right part of the lid. The Ukrainian pro-Russian rebel "Donetsk Republic" flag sticker suggested the information on him being killed in Syria was not true. Other sources told us the coffin had arrived from Rostov-on-Don, Russia. Rostov is the place where the bodies of Russian volunteer fighters and soldiers killed in Donbas are delivered before they are sent to the relatives. Should Rekushin have indeed died in Syria, his body certainly would have been delivered by air to either Crimea or Mozdok. We also asked our source to photograph the grave to double-check the full name and the dates of death and birth, as well as get Rekushin's photo and try to find him on social networks again. 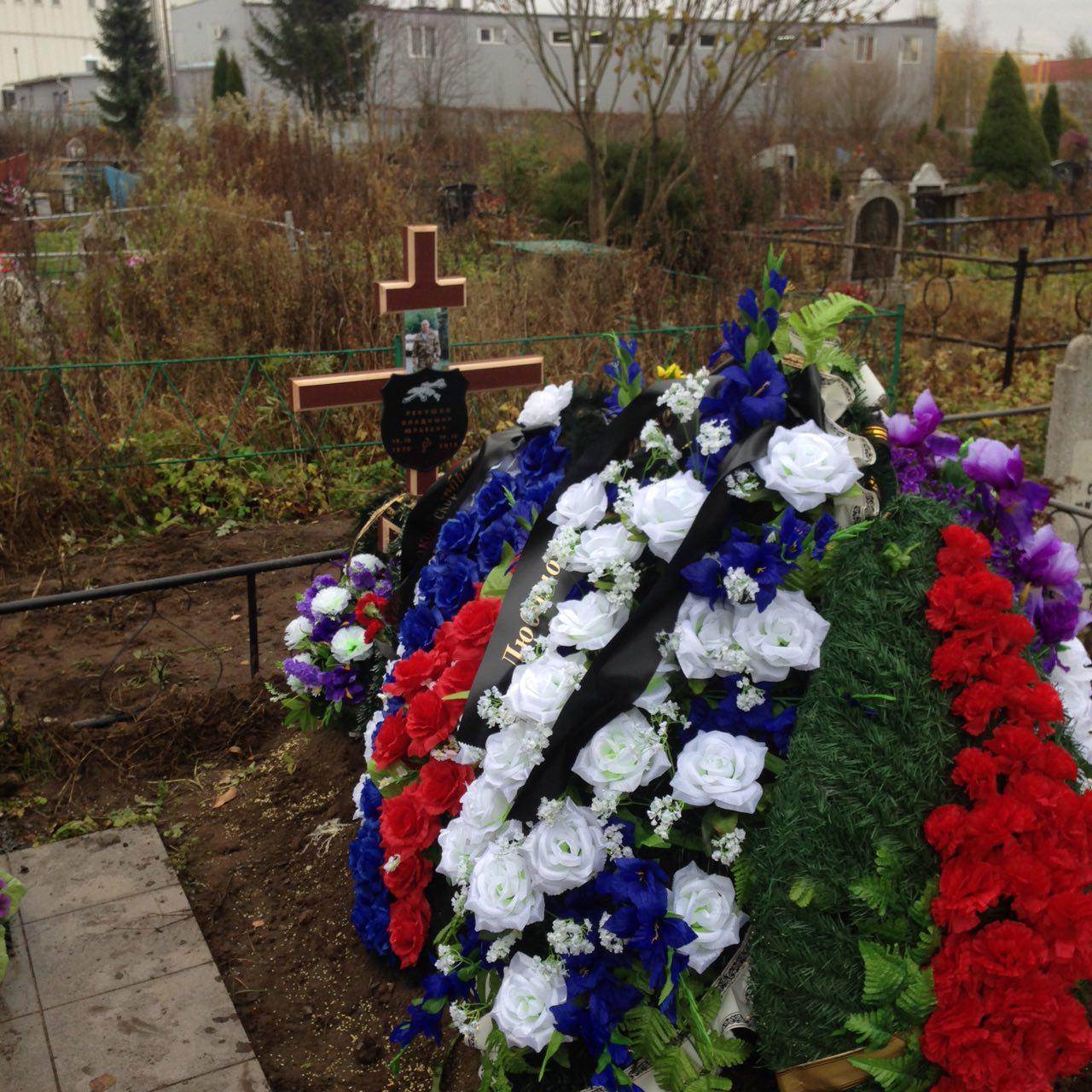 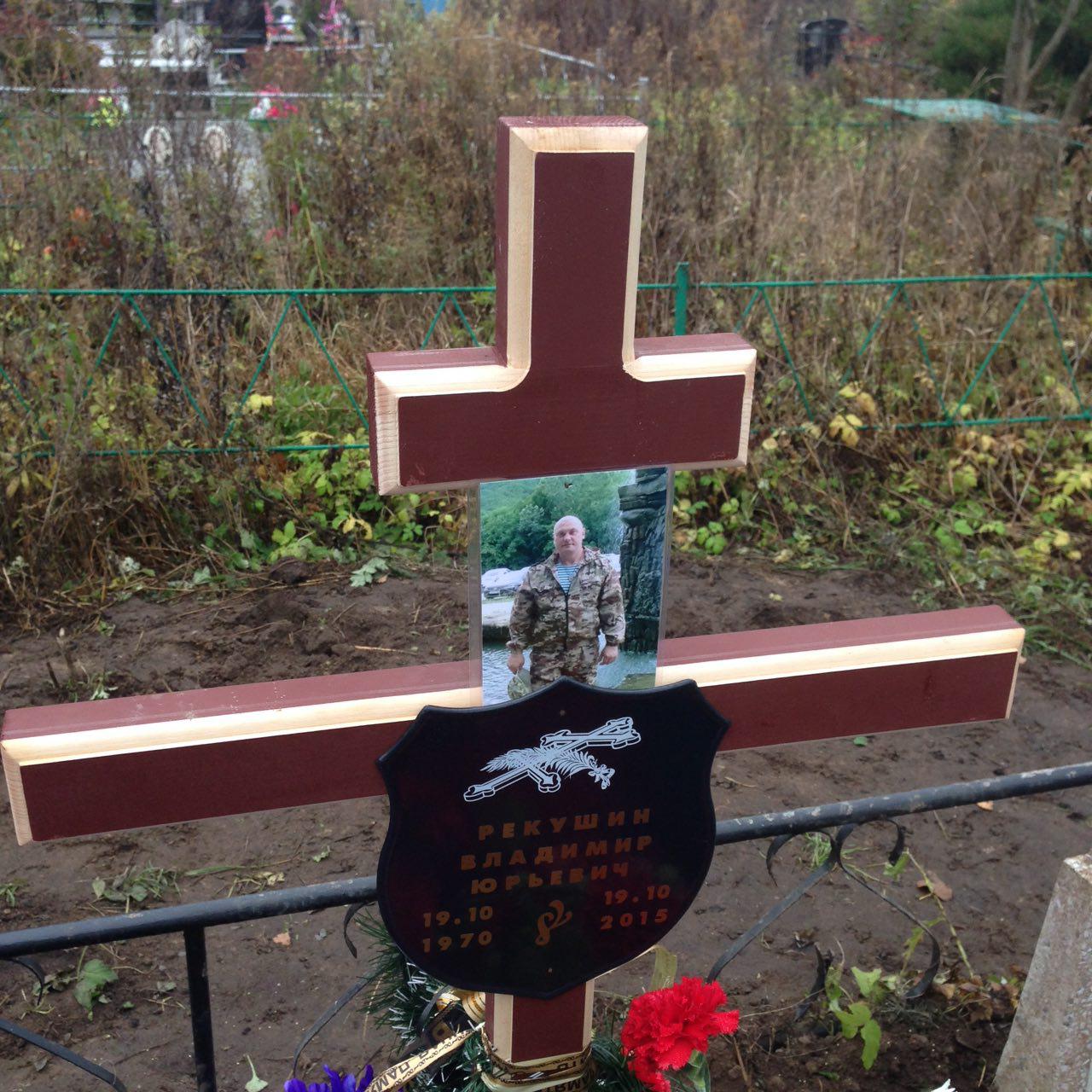 There was no Russian Ministry of Defense wreath on the grave (which was not surprising, since we were already sure he'd been a volunteer). We also made sure we got his name and dates of birth and death right. He indeed was 45, and he was killed on his birthday.

Later, other sources gave us proof he indeed was killed in Donbas.

Why are the relatives so sure he was killed in Syria?

The subjects of our investigations are not real brave warriors but emotionally unstable people tending to romanticize their "exploits", often making up stories and images an even prone to plain lies. These people of low intellect are susceptible to propaganda which compels them to take up arms and fight imaginary "fascists". When they arrive to the warzone, they start making up stories about destroying a "fascist" tank, shooting down a helicopter with "American invaders", strangling 20 spies with their bare hands. They have a desperate need of justifying and romanticizing own actions. Often they start believing in the lies they have invented.

In June 2015, the conflict in Eastern Ukraine was "frozen". The active phase of the fighting stopped. Making up stories of own victories became harder, especially when TV started reporting "all quite in the Donbas". Those who didn't want to go home needed new excuses for their relatives. Since late August, the talk of the day was Syria. This is why many volunteer fighters tell their relatives they have left for Syria to fight ISIS terrorists, while actually staying in Eastern Ukraine. Since some websites recruiting volunteers for Syria have emerged, relatives readily believe these stories. Sometimes the reason behind an unwillingness to go back home may be new families or wives, "found" in Donbas and kept secret from the real family.

This is why it is so important to double-check any sources of information. Volunteers, soldiers and their relatives may make up and spread all kinds of stories even if they have documental evidence of completely different events.

P.S. We had to omit quite a few interesting details of the human intelligence involved in Rekushin’s case, since writing about those would divulge our sources.