Nadiya Savchenko is Innocent, and Here’s the Proof 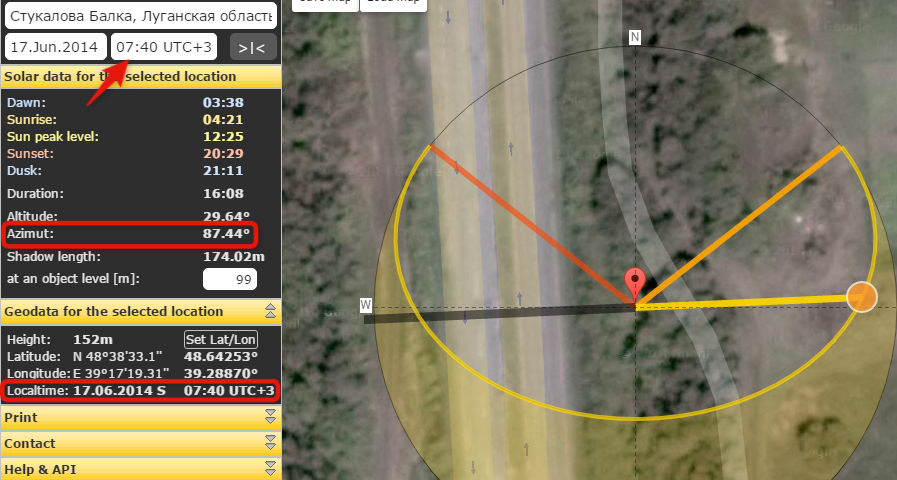 On March 2, 2016, prosecutor asked the Russian court considering the case of Ukrainian pilot Nadiya Savchenko to sentence her to 23 years in a prison colony. Savchenko is accused of working as a spotter for Ukrainian artillery fire that killed Russian journalists Igor Kornelyuk and Anton Voloshin.

However, videos provided by pro-Russian fighter Egor Russkiy who filmed the capture of Nadiya Savchenko contain undeniable proof that by the time Russian journalists were killed Nadiya had already been captured and thus is not guilty of their murder.

This was the conclusion made by Russian astronomer Olga Vozyakova (gave testimony to the court) and experts of the Kyiv Forensic Institute (expert analysis text).

This post summarizes those expert assessments while using a simplified technique of determining the time a video was filmed; a technique any reader can easily reproduce.

According to the indictment posted by Nadiya Savchenko’s lawyer Mark Feygin, Savchenko corrected the fire of Ukrainian howitzers, which lead to death of Russian journalists, from 11 AM to 12 PM local time on June 17. According to the testimony of the prosecution’s witness Elfimov, the journalists died “around 12. Could be five minutes to 1 or 5 minutes past 1”.

According to the indictment, Nadiya Savchenko was captured within the time frame of 12 to 12:30 local time. The prosecution’s witness Egor Russkiy who took part in Savchenko’s capture told the court she was captured around 1 PM. 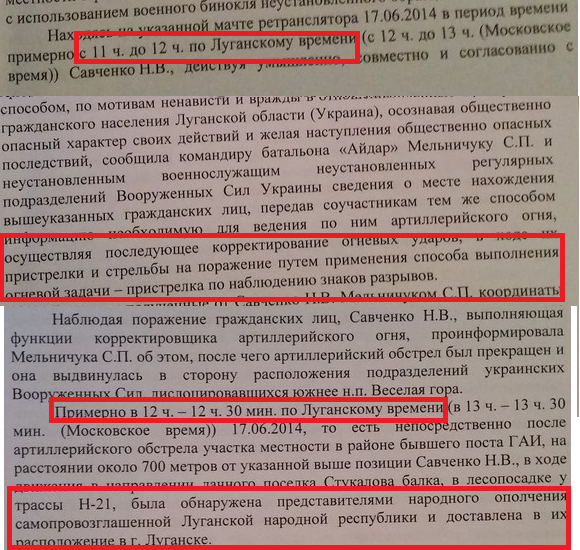 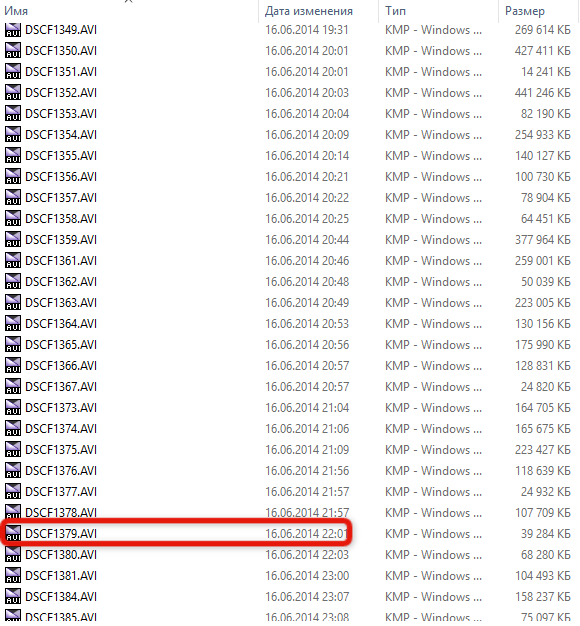 Egor Russkiy’s camera clock is obviously off. To determine the actual time when Nadiya Savchenko was captured, we will first determine when the video «DSCF1349.AVI», timestamped 19:31, was actually filmed. 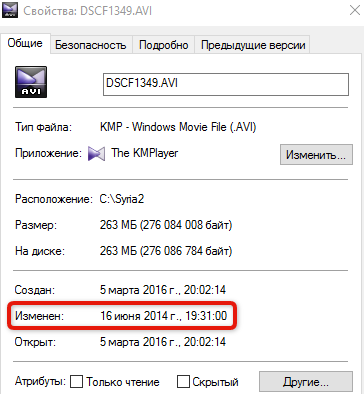 The video creation date (above) is the date the video was copied to the computer we used for our research. You can check it by saving the video from Google Drive to your PC and looking through its Properties (to do that, right clck on the video file to open context menu).

According to the indictment, Nadiya Savchenko was captured near Stukalova Balka. At 0:30 in «DSCF1379.AVI», a billboard, a bus stop and a road sign are visible. 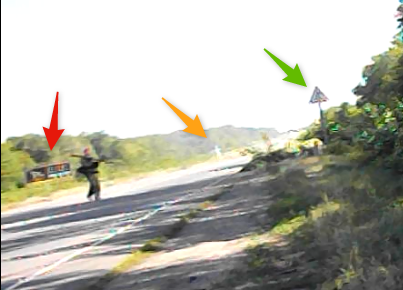 The billboard and the bus stop are clearly visible in a Google Earth image dated March 22, 2014 (see how to view historical imagery in Google Earth here): 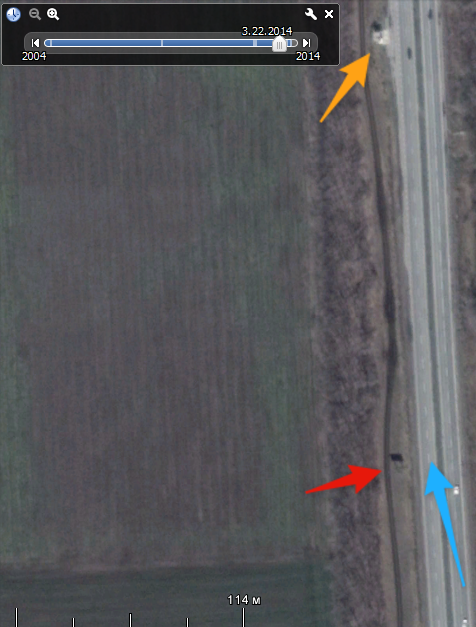 The camera’s direction is marked with a blue arrow. Google Maps link

The bus stop, the billboard and the road sign can also be seen in a video filmed from a car driving from Schastya to Luhansk and posted on June 7, 2015. It should be noted that the car is moving south, contrariwise to Russkiy’s camera direction: 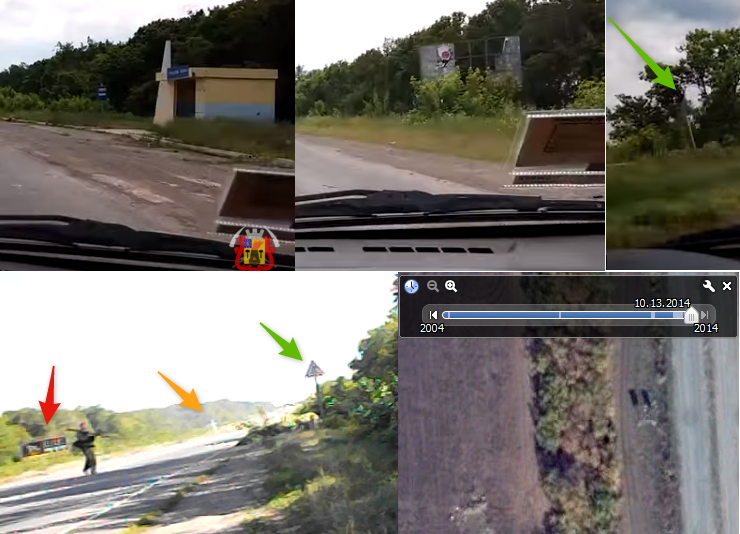 Having passed the road sign, the car in the 2015 video moves for about 10 more seconds before a turn and a gap in the tree line to the right are seen. Russkiy’s video was obviously filmed to the North of this spot. 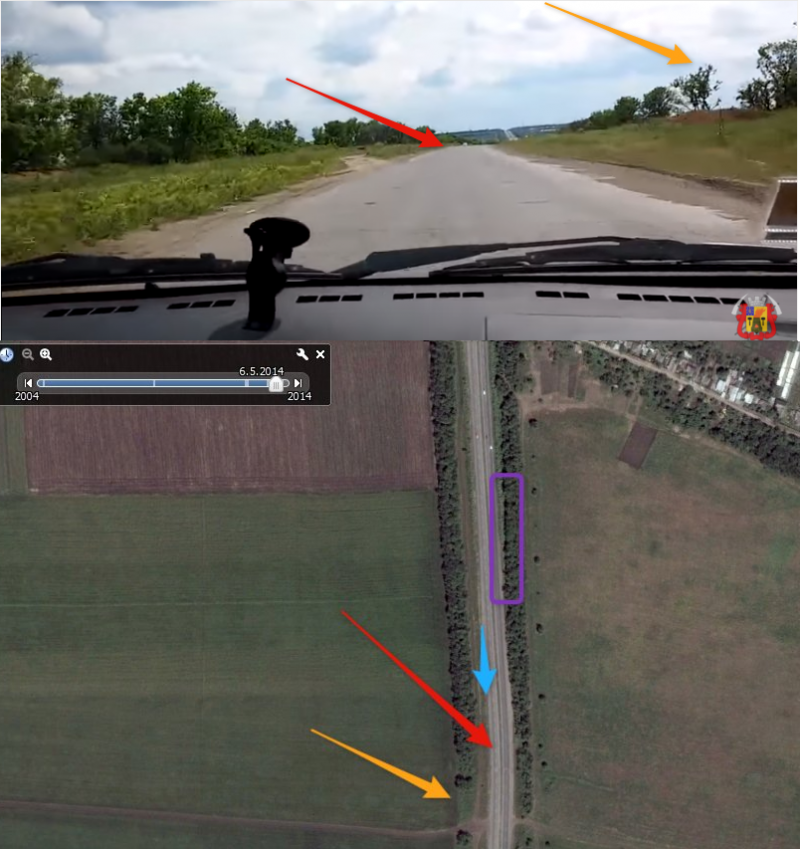 The position of the car in 2015 is marked with blue arrow; Approximate Egor Russkiy’s position during filming marked in purple. Google Maps link

Starting at 0:54, Egor Russkiy turns the camera by 180 degrees. Before that, he was looking North at the billboard and the bus stop; after that, he is looking south and sees a reccognizable landscape: 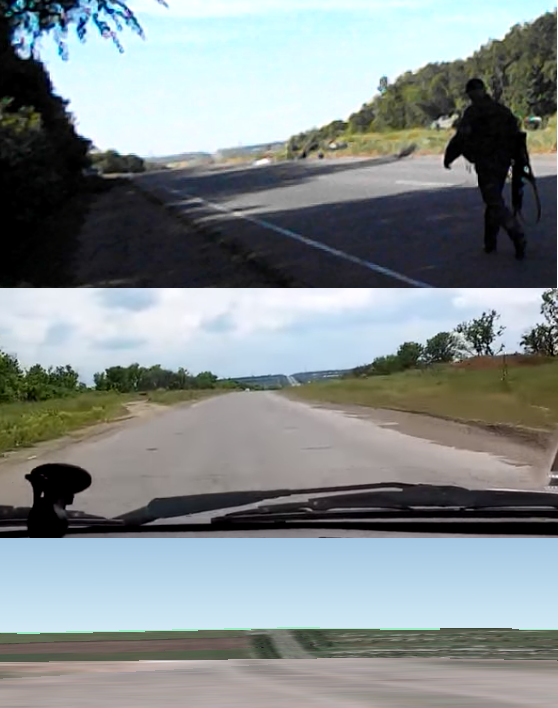 Top to bottom: landscape in Russkiy’s video; landscape from the video of a car driving south from Schastya to Luhansk; a view of the Google Earth 3D landscape model taken by turning the camera south at the Russkiy video’s filming location

Thus, Russkiy’s camera is facing south. The trees to the left of the camera, i.e. to the east of the road, cast shadows at an almost straight angle to the road: 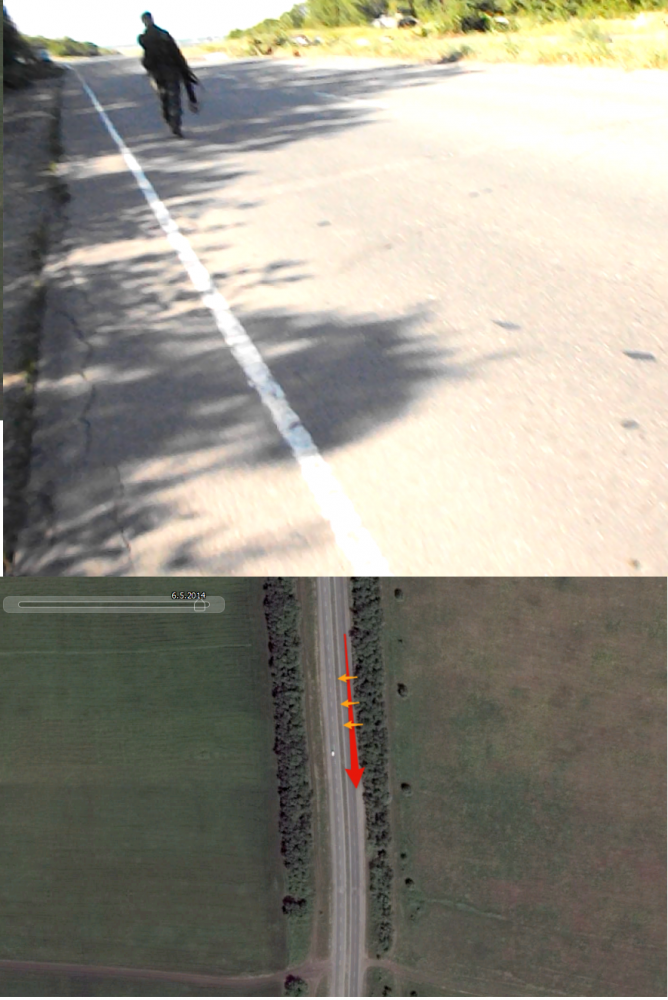 To determine the time the videos were filmed by shadow directions, we will use SunCalc, a tool that allows you to match the sun position and shadow direction to date and time.
Shadows were cast east to west at a straight angle to the road at about 7:40 AM local time on June 17. 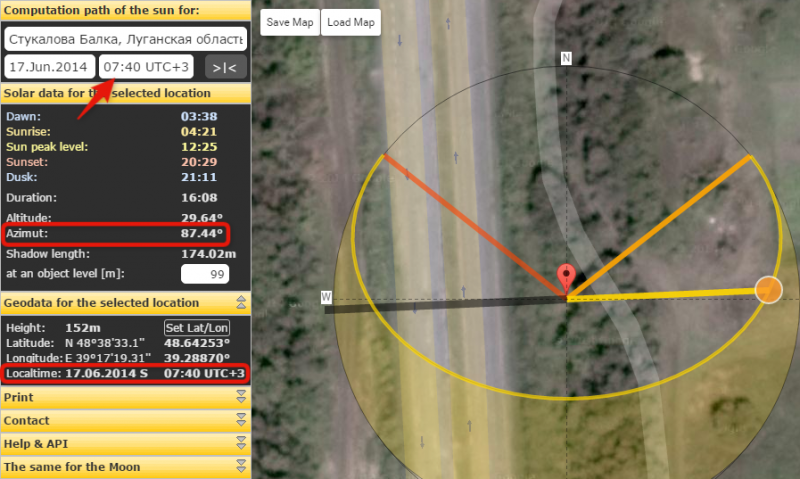 However, we will not assume we perfectly determined tha angle of the shadows to the road to be 90 degrees. For shadows at a straight angle to the road, the solar azimuth angle (i.e. the angle between North and the sun) is 87.44 degrees. Let us consider marginal variants for a 10 degree margin of error: 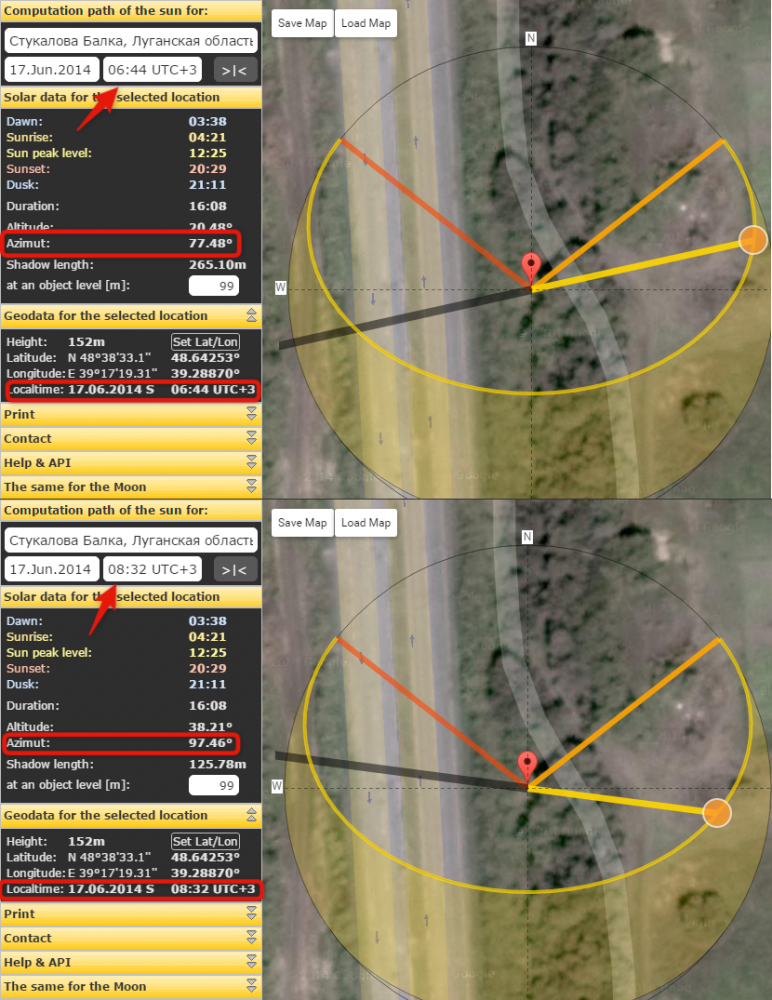 Thus, we have determined that Egor Russkiy’s video “DSCF1349.AVI” was definitely filmed between 6:44 and 8:32 local time, most likely around 7:40 AM local time.

Our simplified methodology, unlike the one used by, for example, the Kyiv forensics instutute, does not allow for establishing a more accurate time frame. However, even this (deliberately inflated) margin is enough to confirm Nadiya Savchenko’s innocence. 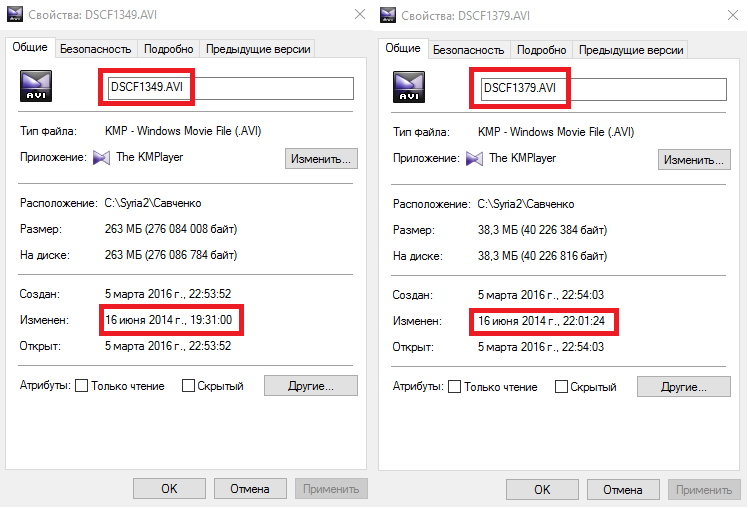 Thus, 2 hours 30 minutes had passed between filming the “DSCF1349.AVI” video we’ve analyzed above and the Savchenko capture video.

Thus, the indictment which states Nadiya Savchenko corrected Ukrainian artillery fire from 11:00 to 12:00 and was captured by LNR rebels between 12:00 and 12:30 is obviously not true. Even further from reality is the testimony given by Egor Russkiy, according to whom Savchenko was captured “around 1 PM”. According to witness Elfimov, the Russian journalists were killed “around 12 PM” – by that time, Savchenko had already been captured for at least an hour.

If Nadiya Savchenko had been captured at noon (i.e. the earliest possible moment within the indictment’s time frame), the “DSCF1349.AVI” video would have been filmed 2 hours 30 minutes before noon, i.e. at 9:30 AM. This would show the shadows considerably tilted towards the camera, which is not seen in the actual video: 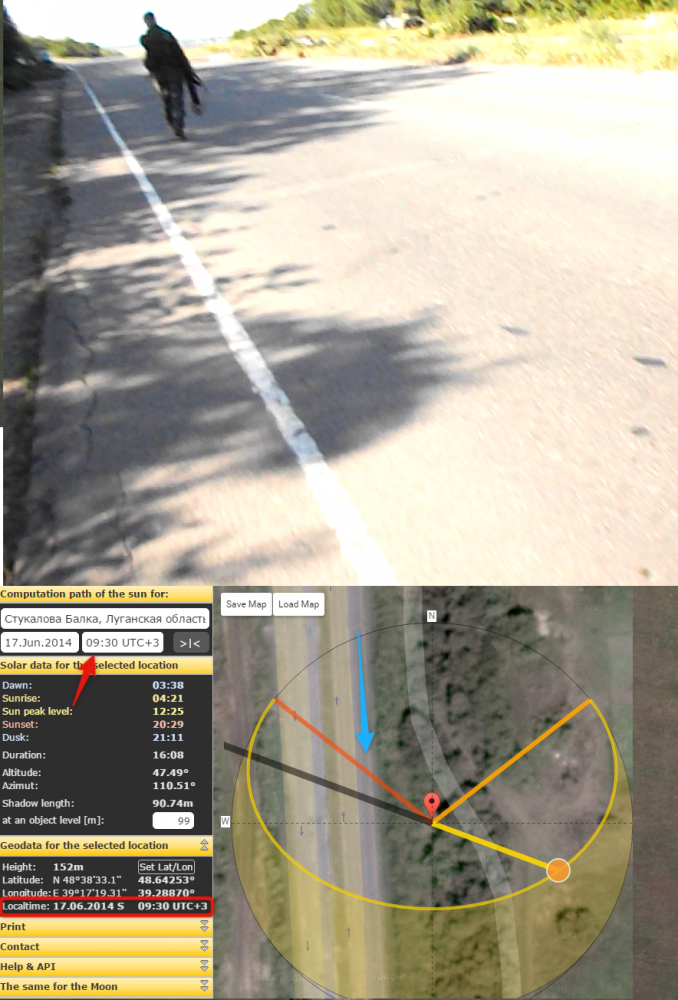 The experts who analyzed the videos for us have come to similar conclusions. The Kyiv forensics analysic concludes that “the start of the recording of the video file “DSCF1379.аvі” showing the circumstances of Nadiya Savchenko’s arrest by members of the terrorist group “Luhansk People’s Republic” is 10:31:12 AM Kyiv summer time with a margin of error of 10 minutes“. Russian astronomer Vozyakova concludes in here analysis that the average interval between the filming time of videos (calculated via shadow length) is 12 hours 39 minutes with a margin of error of 15 minutes, meaning that the Savchenko capture video, timestamped as 22.01, was actually filmed within the interval from 10:25 to 10.55 AM. Both intervals are more than an hour away from the journalists’ deaths which occured around 12 PM. 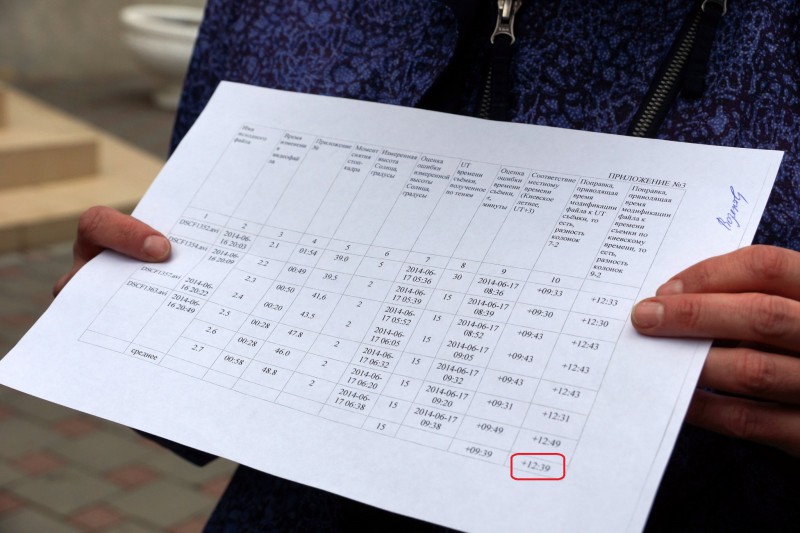 Screenshort from Vozyakova’s analysis, with the average divergence (based on analysing 7 video frames) marked in red (source). Click to enlarge

The videos provided by the prosecution’s witness Egor Russkiy present indisputable proof Nadiya Savchenko was not involved in the death of Russian journalists Igor Kornelyuk and Anton Voloshin. We believe Nadiya Savchenko should be fully acquitted and returned to her home country.