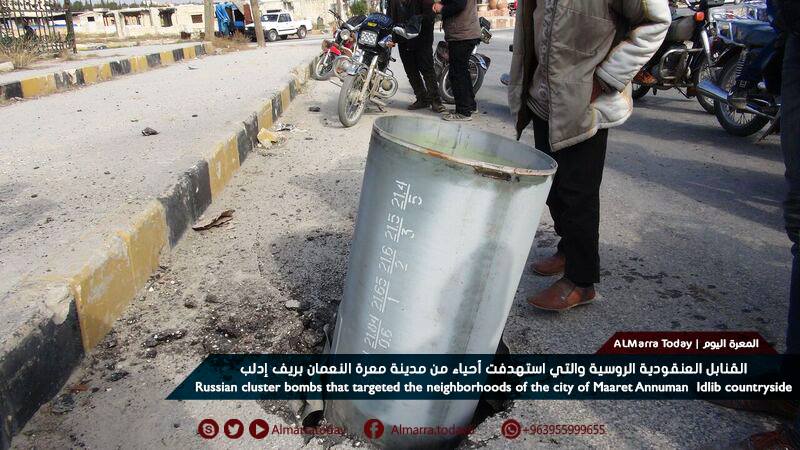 In late December 2015, Human Rights Watch and Amnesty International published reports on Russian bombings in Syria. The HRW report claimed growind evidence of cluster bomb use since the start of Russia’s operation in Syria, while the Amnesty International report told of Russian airstrikes on civilian targets.

Russian MoD’s spokesman Igor Konashenkov denied the HRW accusations, claiming "Russian aircraft in Syria do not use cluster munitions and such weapons are not stored at the Hmeymim airbase". The Amnesty International report, according to Konashenkov, "is full of fakes and stock phrases". Russia’s Air Force commander Viktor Bondarev, in turn, claimed Russian pilots "have not missed even once while they have been there, nor have they delivered strikes on "banned" facilities, the so-called sensitive locations — schools, hospitals, mosques, other sacred places".

Conflict Intelligence Team has factchecked the data presented by human rights watchdogs as well as the claims of Russian military officials.

Cluster bomb use and their presence at Hmeymim airbase

A detailed description of cluster munitions is available on the website of the International Committee of the Red Cross. Cluster munitions are containers exploding in the air to distribute small-caliber bombs, or "submunitions", over a large area. Since most submunitions are unguided and a significant portion of them often remains unexploded, cluster bombs effectively turn large areas into minefields, causing civilian casualties.

Russia, as well as some other countries, hasn’t signed the cluster munitions convention. However, Russia, as a successor state to the USSR, is a member of the Fourth Geneva Convention, which, in items 4 and 5 of the Additional Protocol I, prohibits indiscriminate attacks, i.e. attacks that can’t be directed at specific military objects and that inevitably cause civilian casualties.

In order to check the Russian MoD’s claim that there are no cluster munitions as the Russian airbase in Syria, we examined videos and photos published by Russian state media and the Russian Ministry of Defense itself.

Armed #ruaf su-34 taxis just before takeoff. Lots of new video will be up on RT/Ruptly soon. #syria pic.twitter.com/TNTR7L4x5T

It can also be seen in a video published by Ruptly:

A detailed description of this bomb is given in a TV show "Russian Technology" by Rossiya TV channel:

At 1:26 you can see a close-up of a model SPBE-D submunition: 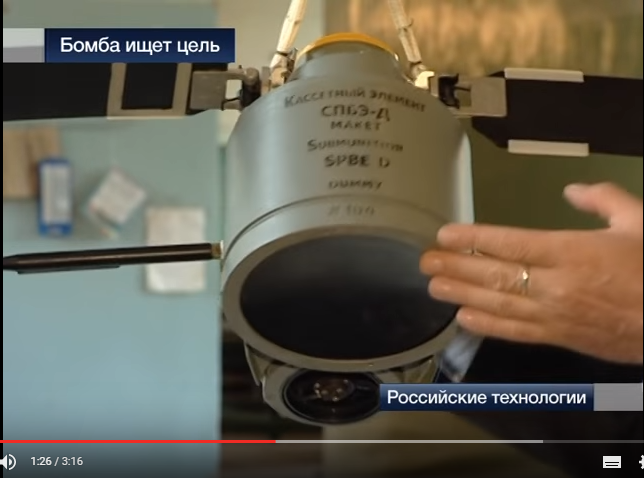 The speaker claims that if the submunition fails to hit a target (an armored vehicle), it “self-destructs without hitting anything”. However, Human Rights Watch managed to find a video (taken in Hayan) and photos (taken in Kafr Haleb) which show an unexploded SPBE-D submunition.

Another video (taken in Haritan) shows the submunition starting at 2:48:

SPBE-D submunitions on a Russian TV video and on videos and photos from Syria.

Hayan, Hraitan and Kafr Haleb are situated within the rebel-controlled part of Aleppo governorate (see map): 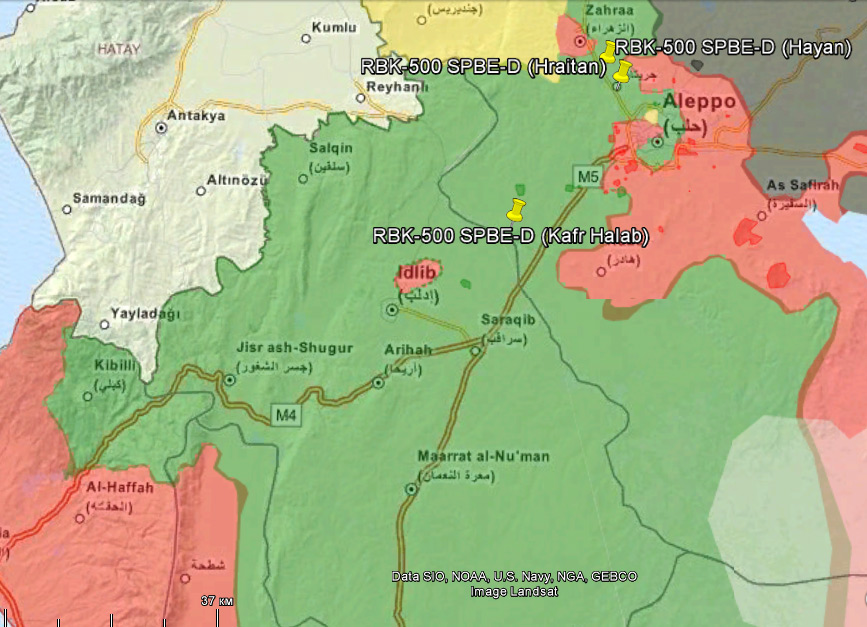 RBK-500 SPBE-D cluster bombs hadn’t been used in Syria before the start of the RuAF operation.

RBK-500 SHOAB-0,5 is a cluster bomb armed with 565±5 ball-shaped anti-personnel bomblets, adopted in 1969. HRW researchers found bombs of this type in photos from Bawabiya and a video from Lataminah:

We have found a model of this bomb in Ukraine’s State Aviation Museum. 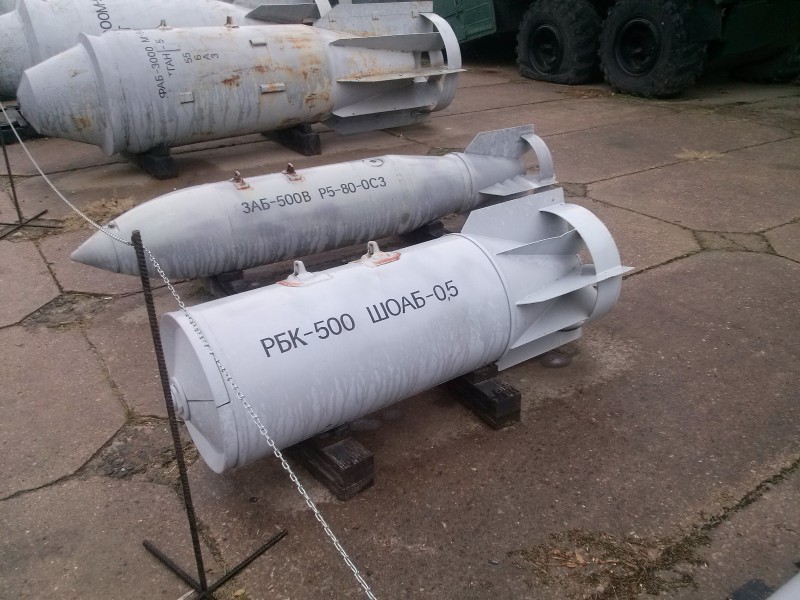 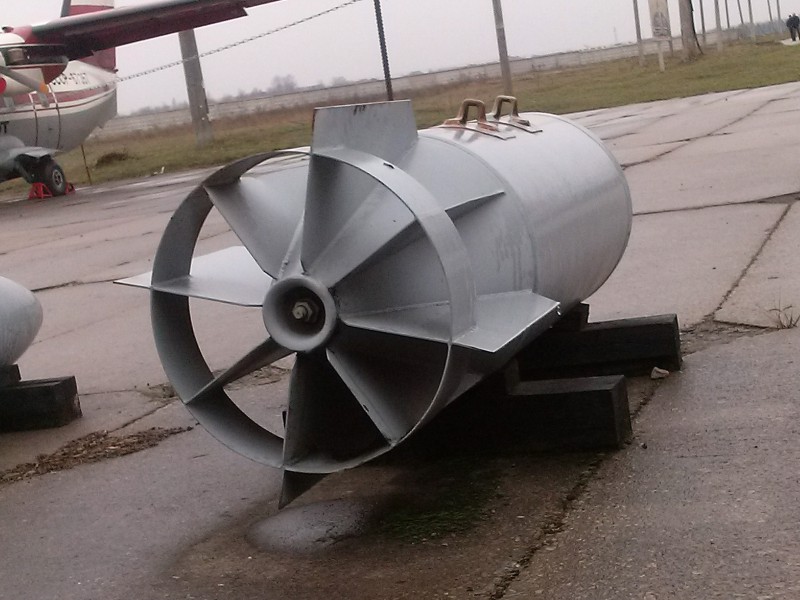 RBK-500 SHOAB-0,5 at Hmeymim airbiase, in Lataminah and in Kyiv’s aviation museum.

RBK-500 SHOAB-0,5 reference photos can also be found on a scale modelling enthusiast website karopka.ru. Bombs visible in one of the photos resemble bombs seen in a photo report by arms-expo.ru about a surprise check of aviation and air defense combat readiness in Russia’s Central Military District in May 2015. 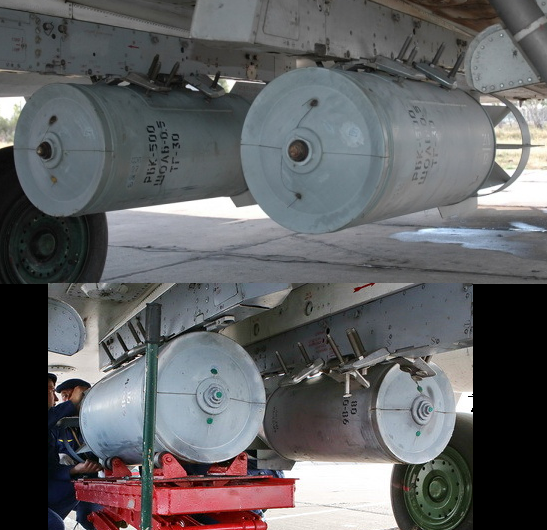 Comparing the photos with other reference photos, we found out the bombs in the photo were equipped on a Su-24 bomber: 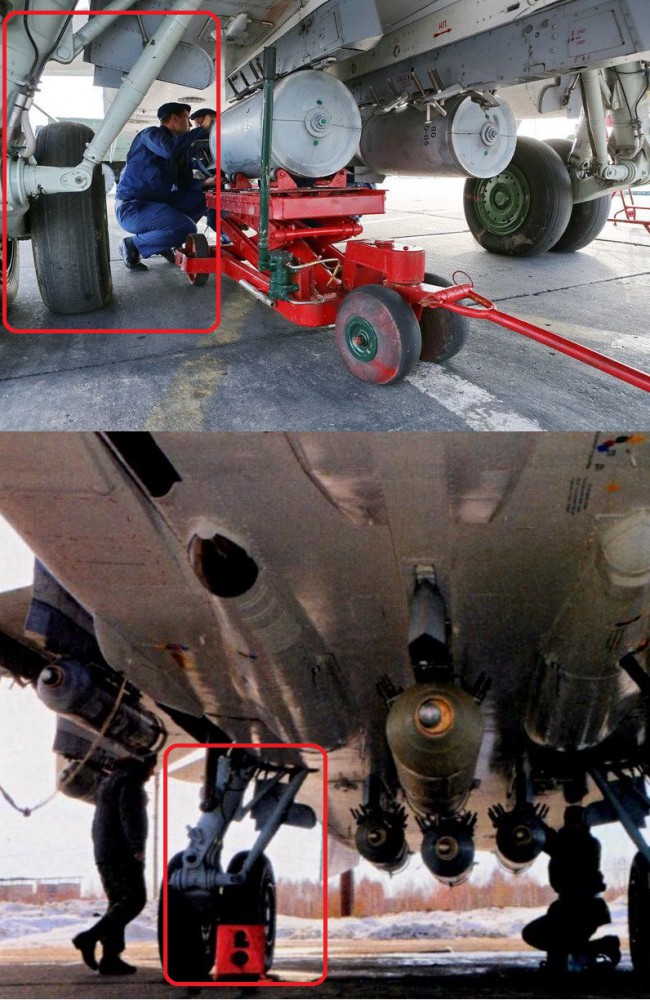 All Su-24 bombers in the 2nd Air Force and Air defence command, which is part of the Cental Military District, are permanently based at Shagol airbase.

One of the photos also shows a side number "30 white", matching the number of a Su-24 MR recon plane also based at Shagol (source): 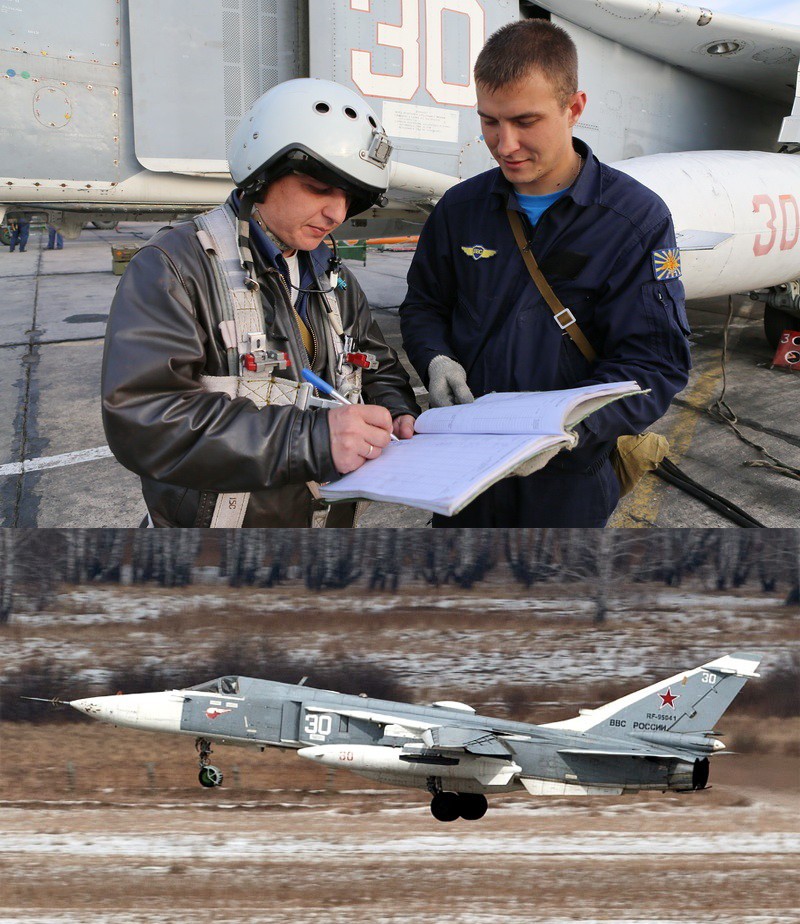 By matching the Su-24 numbers on images at Shagol airbase and at Hmeymin airbase it’s possible to prove that bombers from this airbase take part in the bombing campaign in Syria:

Su-24 bombers at Shagol airbase (top) and at Hmeymim airbase (bottom). Click on the image to view it in full size

Thus, we have found out that the Su-24 bombers at the base, planes from which are engaged in the Syrian operation, are also armed with RBK-500 SHOAB-0,5 cluster bombs.

Apart from that, at the Russian MoD’s VK page we found a photo of a Su-25 equipped with a bomb similar to RBK-500 SHOAB-0,5 (saved copy): 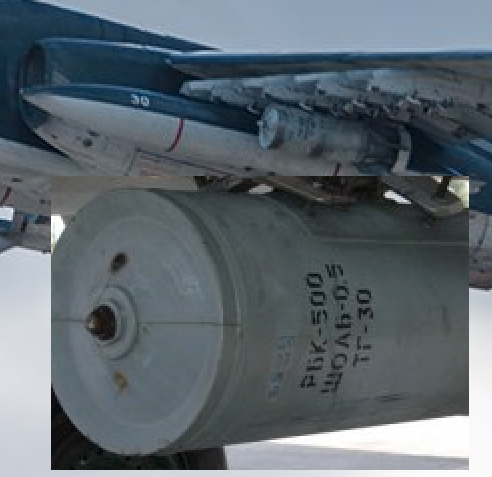 Local activists from Lataminah told us the filming location of the video published above. By matching video screengrabs with Google Earth imagery we confirmed the video being shot in Lataminah:

Click on the image to view it in full size: 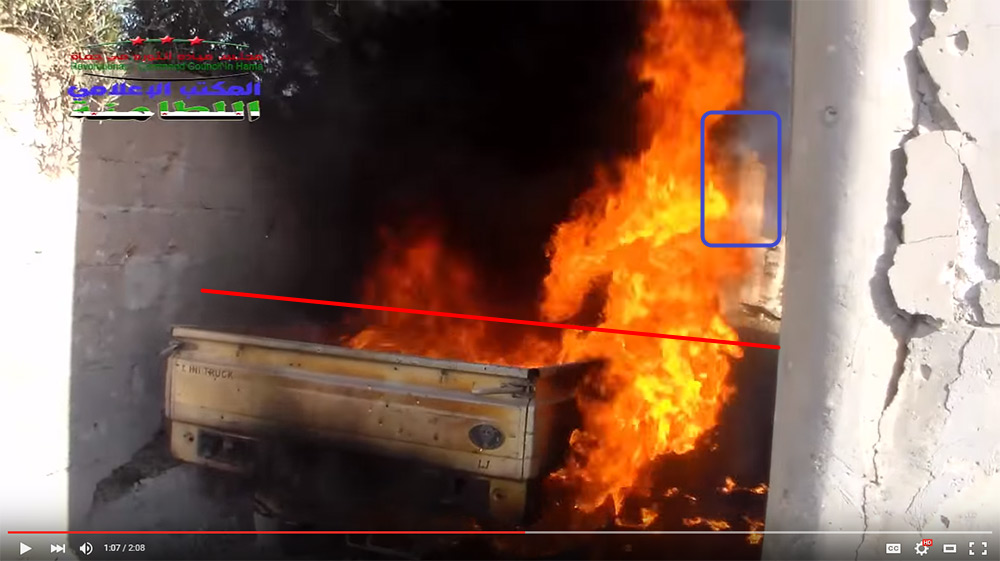 According to some sources, the dispersal area of RBK-500 submunitions may amount to 560×640 m. By drawing a circle 600 meters in diameter around the spot where the bomb’s tail fell, wecan determine that a large residential area would be affected by the submunitions’ dispersal:

The photos and videos mentioned above also feature SHOAB-0,5 fragmentation submunitions (the images match those posted at a Russian weapons forum Guns.ru): 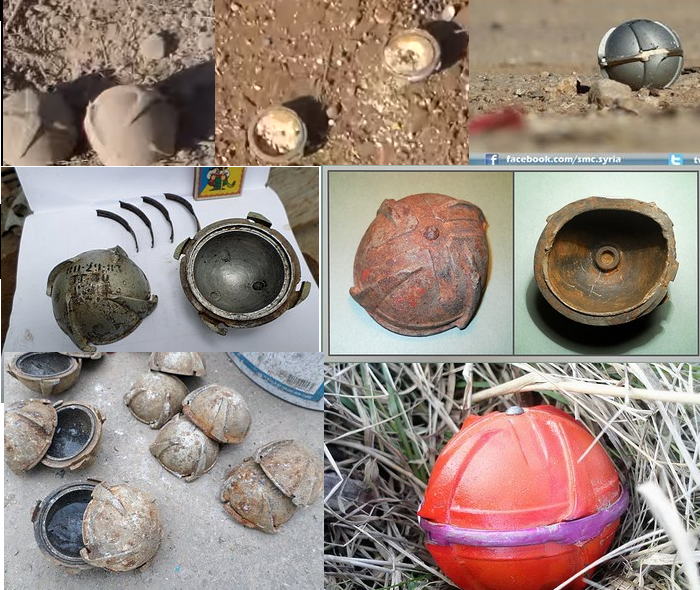 Lataminah and Bawabiya are situated dozens of kilometers from Islamic State positions and are controlled by Syrian rebels: 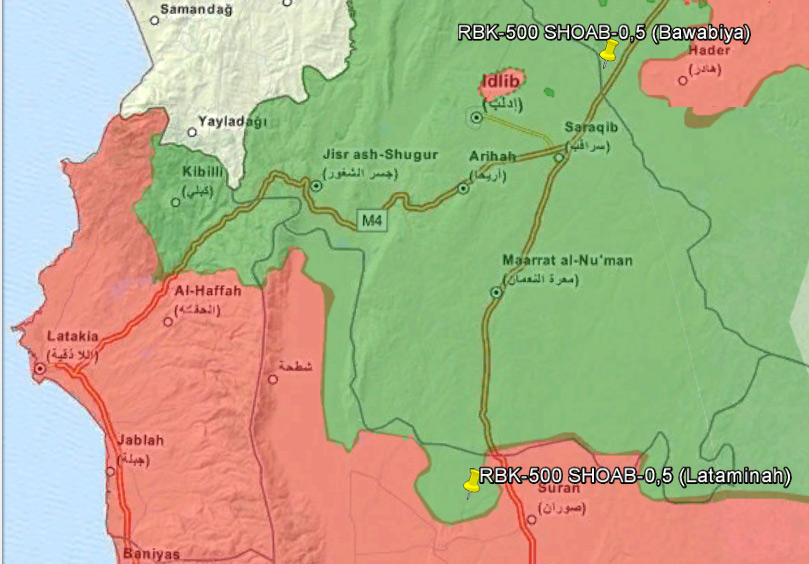 RBK-500 SHOAB-0,5 bombs have earlier been used by Syrian government’s air force (see video), but their use virtually ceased by 2014 and resumed only after the RuAF bombing campaign began.

RBK-500 AO-2,5RTM cluster bomb contained 108 fragmentation submunitions weighting 2.5 kilograms each. According to HRW data, this cluster bomb type has been used the most widely in Syria after the RuAF bombing campaign started. 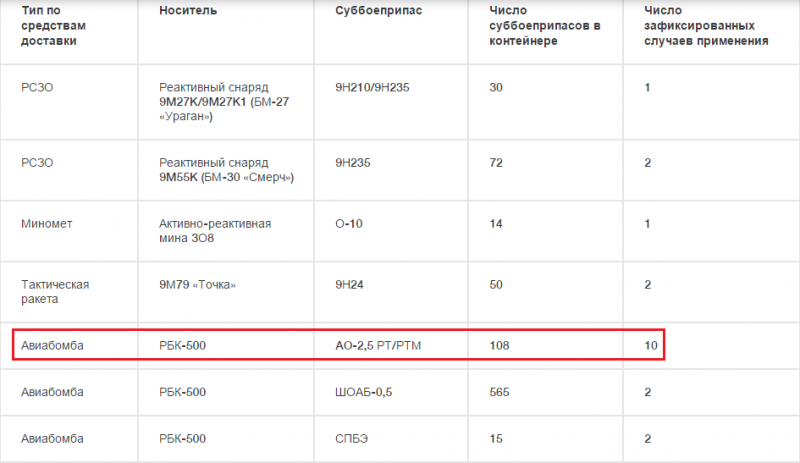 The RBK-500 AO-2,5RTM cluster bomb significantly differs from RBK-500 SHOAB-0,5. Its length is 2145mm without the noce cone (compared to 1500mm for RBK-500 SHOAB-0,5). Besides, the tail fins end further from the cylindrical part of the bomb, while th lid has hooks to attach the nose cone: 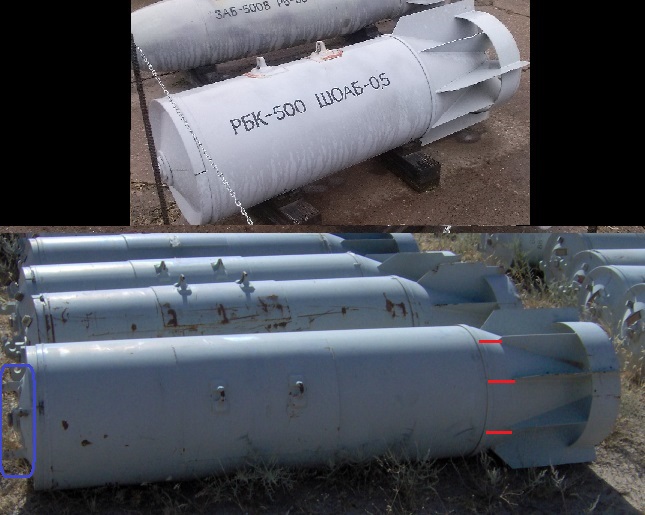 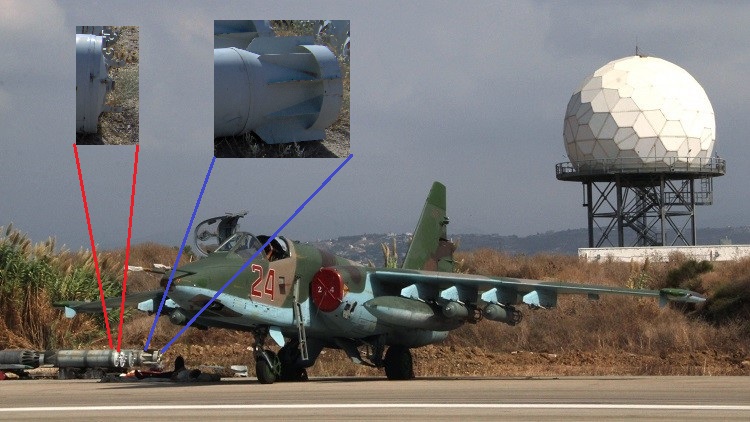 A Syrian journalist sent us photos of a bomb dropped on Maarat-an-Nuuman on December 14. The photos show a RBK-500 AO-2,5RTM cluster boms as well as an AO-2,5RTM submunition: 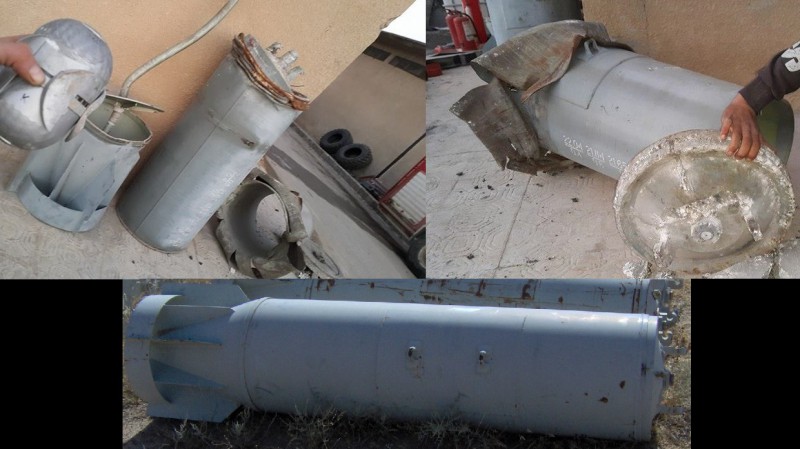 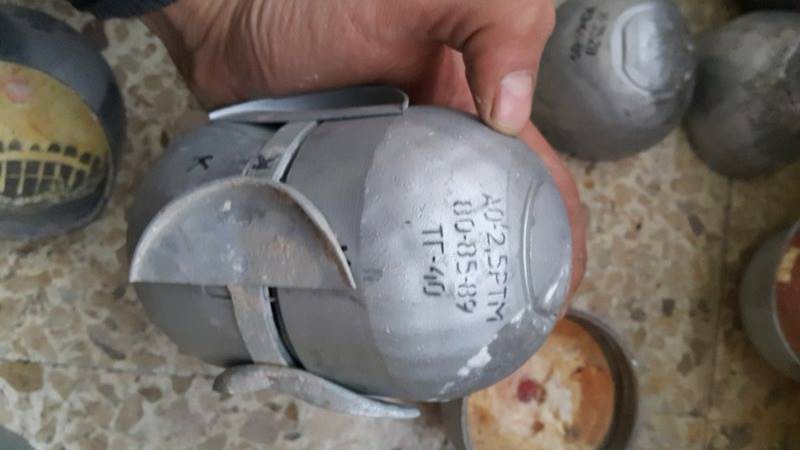 The bomb’s diameter, measured by Maarat-an-Nuuman Civil Defense members, is about 46 centimeters, which, taking into account the falling deformation of the bomb, matches the listed diameter of RBK-500 AO-2,5RTM (450 mm): 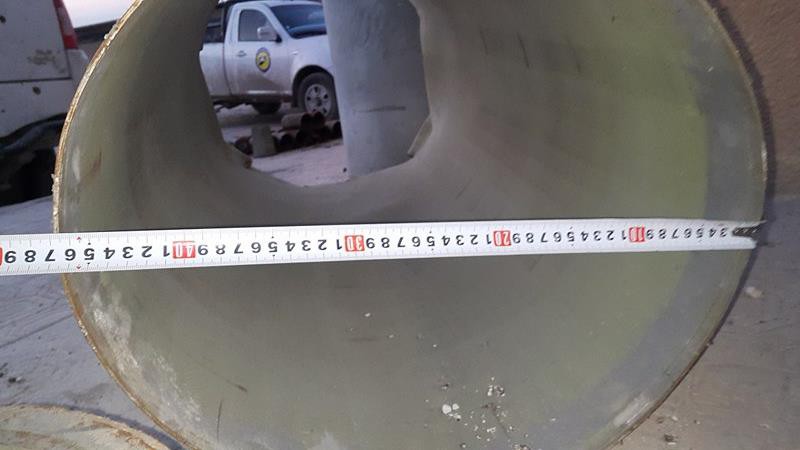 Photos of the cluster bomb and submunitions dropped on Maarat-an-Nuuman on December 14 were published in the city’s Facebook group. A member of Maarat-an-Nuuman’s civil defense told our team the airstrike’s coordinates and provided a video which helped us confirm the coordinates.

The moment of the Civil Defense team’s arrival at the airstrike’s site clearly shows smoke (seen later to be coming from a burning car), a mosque’s dome and a cluster bomb casing visible in one of the photos: 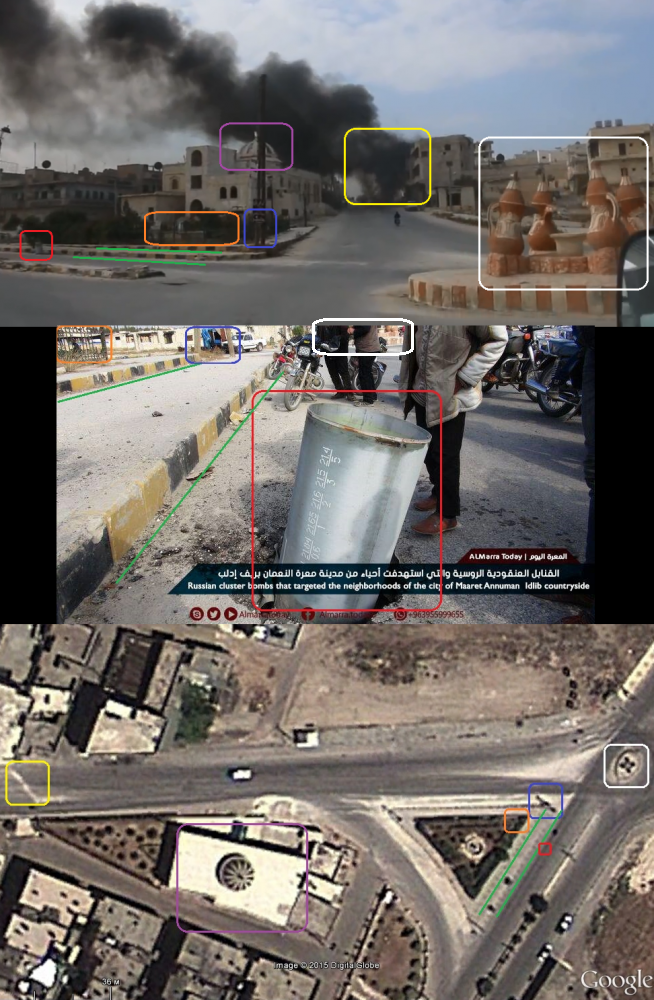 Another photo in the same post shows an apparent fragment of an AO-2.5RTM submunition. Conflict Intelligence Team has determined the photo’s location, around 400 meters from the cluster bomb’s impact site: 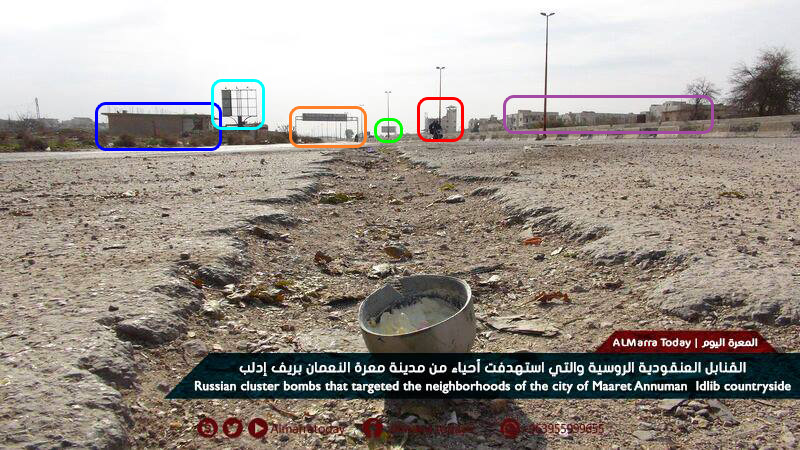 By drawing a circle around the cluster bomb’s impact site (the radius being the distance to the submunition), we found out that, as in the case with Lataminah, several city blocks were probably hit: 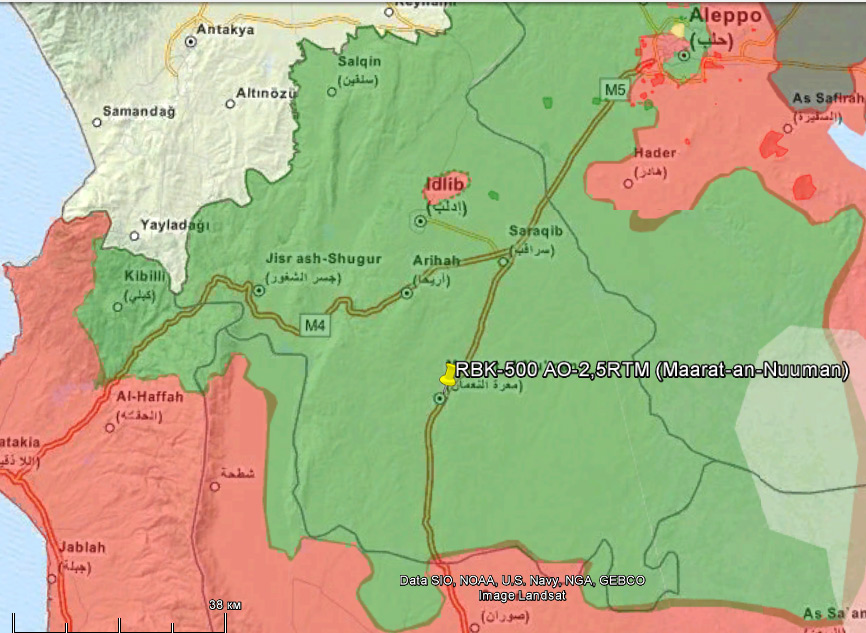 Syrian government forces have previously used RBK-500 AO-2,5RT cluster bombs (see videos), but, same as in the case of RBK-500 SHOAB-0,5, their use virtually ceased by 2014. After the start of the RuAF bombing campaign, evidence emerged of more modern RBK-500 AO-2,5RTM bombs being used.

Other cases of cluster bomb use

Previously our team found evidence of an RBK-500 ZAB-2,5 incendiary cluster bomb being used, damaging a bakery and an olive oil press. 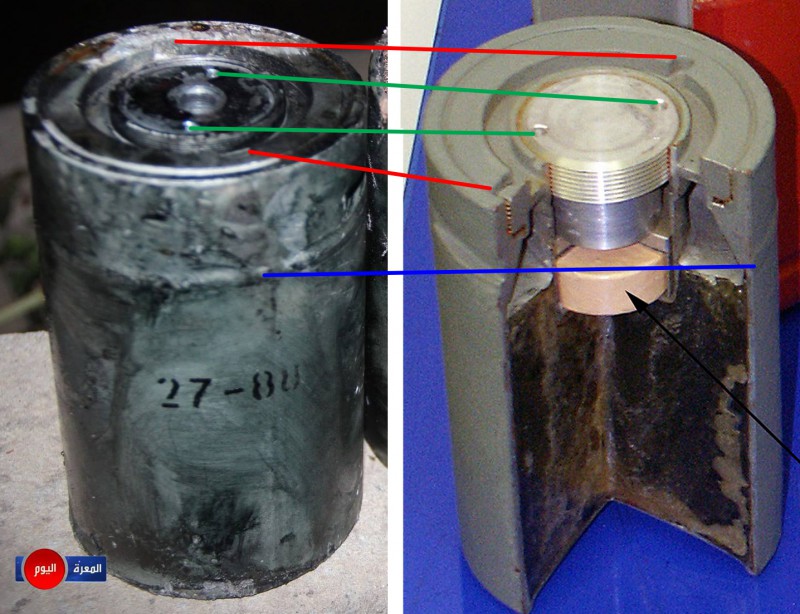 There is a lot more evidence of cluster bombs being used in Syria. Links to videos and photos can be found in the replies to this tweet:

Contrary to the Russian military spokesman’s claim, the Amnesty International report does not consist of "cliches and fakes", but contains several cases of suspected Russian airstrikes on civilian targets previously analyzed by Bellingcat and Conflict Intelligence Team.

On September 30, on the first day of RuAF’s operation in Syria, the city of Talbiseh was bombed. Conflict Intelligence Team analyzed the airstrike video and concluded that it hit a residential area, meters away from a mosque: 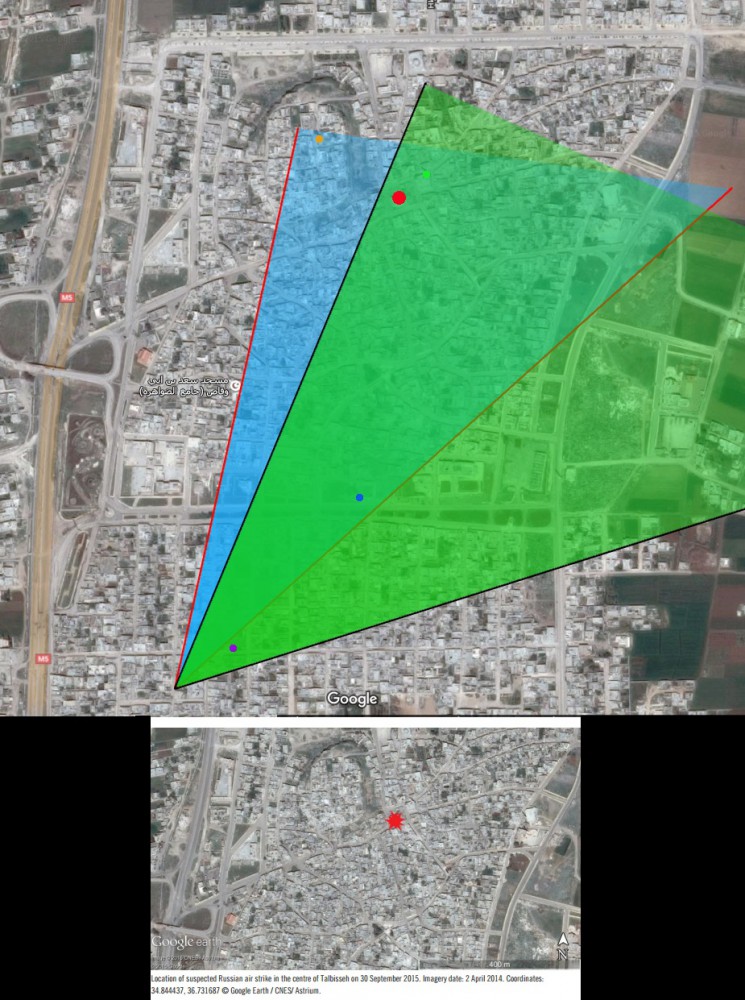 Top: Objects visible in the airstrike video, as geolocated by our team; bottom: screenshot from the Amnesty International report; airstrike site marked in red

On October 1, a suspected Russian airstrike on Jisr-al-Shughur destroyed the minaret of Omar Bin Khattab mosque. The Russian MoD denied these claims by showing an aerial photo of an apparently intact mosque. Amnesty International, citing a report by the Violations Documentation Center in Syria, stated that in fact another mosque was destroyed, to the north of the one shown by Russian MoD. A Bellingcat investigation aided by the Conflict Intelligence Team came to the same conclusion: 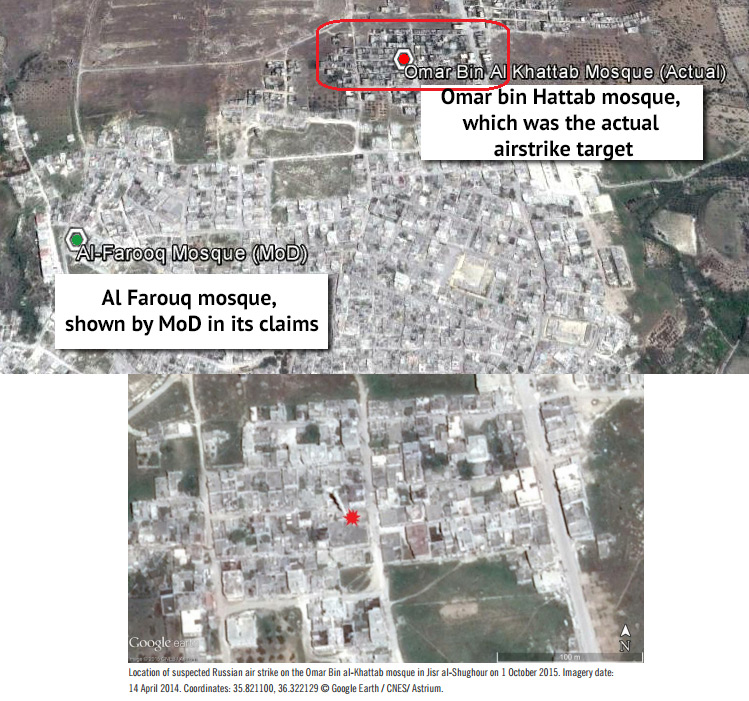 On October 20, a suspected Russian airstrike hit a hospital in Sarmin. The Russian MoD again provided aerial photos showing no visible damage to the hospital. Amnesty International, based on their own investigation, claims the MoD image does not show damage to objects clearly appearing destroyed in the airstrike aftermath videos. A Bellingcat investigation aided by Conflict Intelligence Team found that Russia’s Ministry of Defense presented wrongly dated imagery, while the airstrike hit a school near the hospital (click on images to see in fullsize): 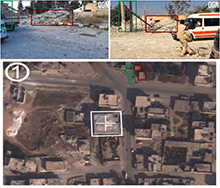 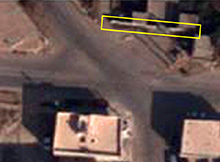 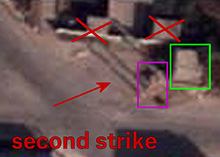 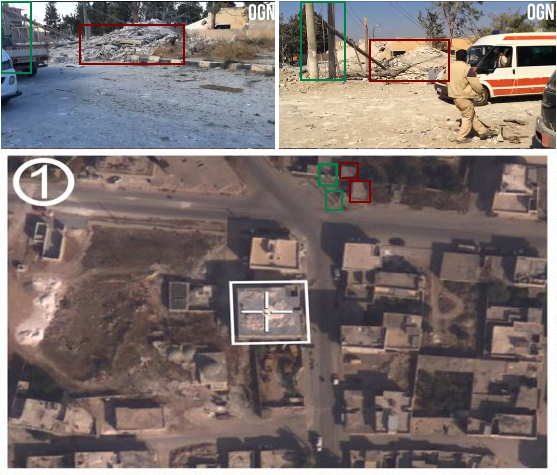 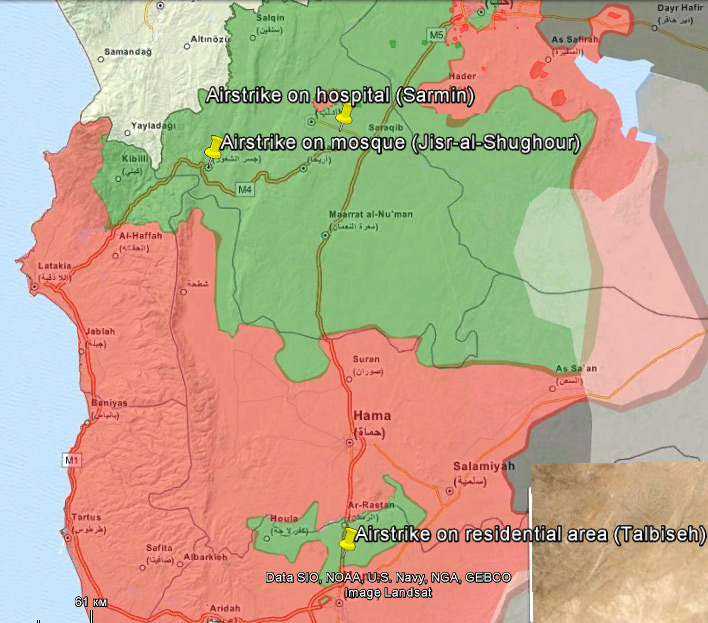 Based on our investigations, it is highly likely that Russian airstrikes in Syria indeed leed to damage of civilian facilities and civilian casualties. The refutal of these facts by Russian MoD representatives are untrue, while the accusations by human rights watchdogs are confirmed by independent research.

As an end note, we would like to call on Russian and foreign media to apply more vigorous checks to the Russian MoD’s claims, which are part of a large-scale misinformation campaign waged alongside the operation in Syria. Conflict Intelligence Team, in turn, is ready to give prompt and grounded comments to Russian officials’ claims upon your requests.

We have also obtained a video taken in December 2015 at Hmeymim airbase, showing a RuAF Su-24 bommber taking off. Out of the bombs the use of which in Syria we have verified, it fully matches RBK-500 ZAB-2,5 incendiary cluster bomb. It could also be a ZAB-500Sh (non-cluster) incendiary bomb (its apperance being virtually identical to RBK-500 ZAB-2,5), but neither we nor other researchers have identified its use in Syria after the Russian bombing campaign began.

Special thanks to Ilya A., MH17_Ru and Eliot Higgins for help in preparing this report.

It’s been a bit over a month since we started our fundraising campaign. As of now, we have raised a bit over 5% of the required amount. Here’s how you can support our team: