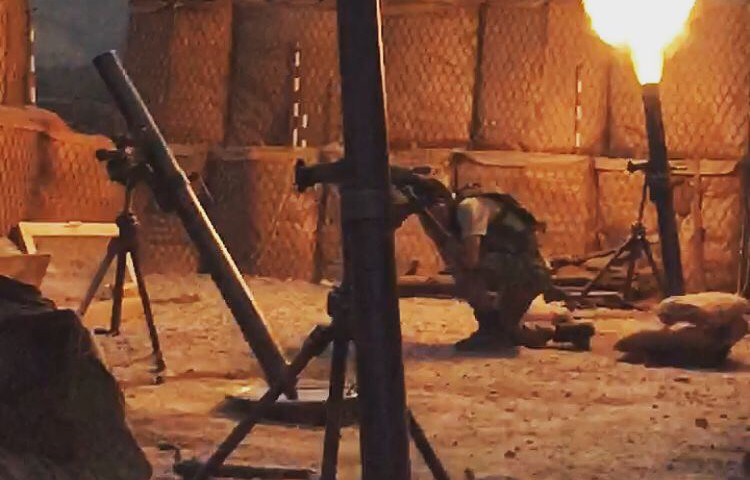 In early December 2015, media reported Turkish troops entering Northern Iraq. According to Turkish sources, the troops were moved into Iraq to train local militias to fight ISIS. Iraqi officials protested the Turkish move and appealed to the UN Security Council.

The recent incident is far from being the first known case of Turkish presence in Iraq. Turkey has been performing military operations in the north of the country and operates several permanent base within the Kurdish Autonomous Region.

According to Almonitor, around 80 Turkish commandos have been present near Mosul for a year, training Kurdish militias. In December they allegedly were propped up with a battalion of the 3rd Commando Brigade, based in Siirt (since 2012 operating on a professional basis) and 25 М-60 Patton tanks.

In May 2015, Kurdish channel Rudaw published a video showing the Turkish camp. Twitter user Samir determined the location of the camp by matching it with Google Earth 3D landscape model:

@trbrtc another possibility https://t.co/M85ypE6SZV shape of the hill and the road seem to match better pic.twitter.com/m9ST6CejTZ

Other photos of the camp show presumably temporary housing and military vehicles:

Turkish presence in Iraq started way before 2015. The first Turkish incursion into Iraq happened during the civil war in Iraqi Kurdistan and was an operation against “Kursistan Workers’ Party” (PKK), fighting for independence of Turkish Kurdistan. According to the Washington agreement which ended the Kurdish civil war, Turkish troops were supposed to monitor the ceasefire. Later Turkey performed several anti-PKK operations in Northern Iraq.

The primary Turkish base in Northern Iraq is Bamerne airport 25 kilometers south of the border, which was built by the US during a "military and humantiarian operation "Provide Comfort" (see. album for photos of the construction). Turkish troops can be seen at the Bamerne airport in an Associated Press video from 2003.

A photo posted in autumn 2015 and geotagged at Bamerne shows a tanksman and 105mm shells. 105 mm is also the caliber of the М68 gun which is installed on Patton tanks: 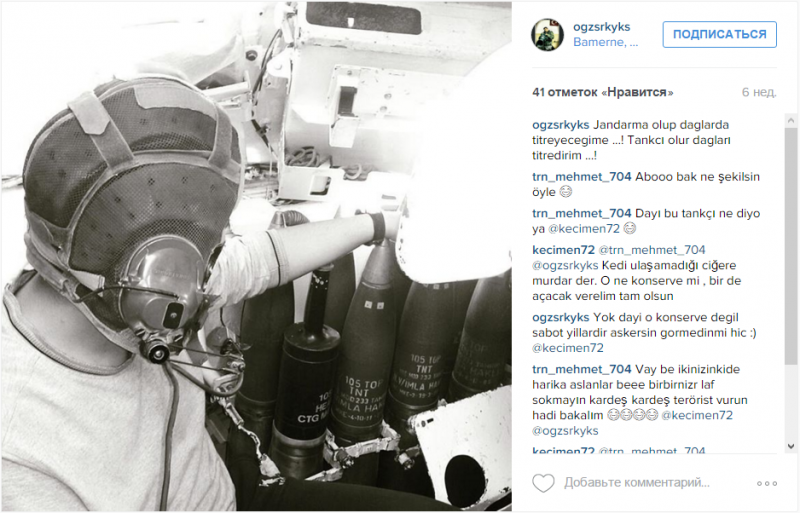 Photos by another soldier give a full view of the Bamerne airbase: 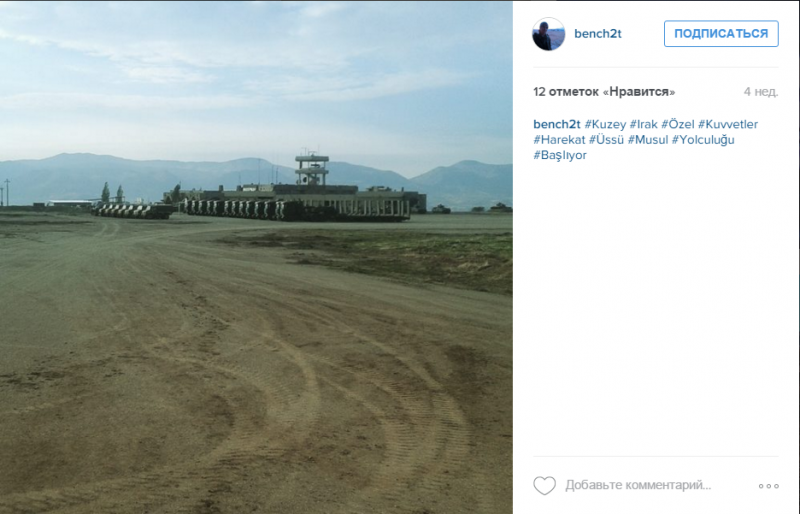 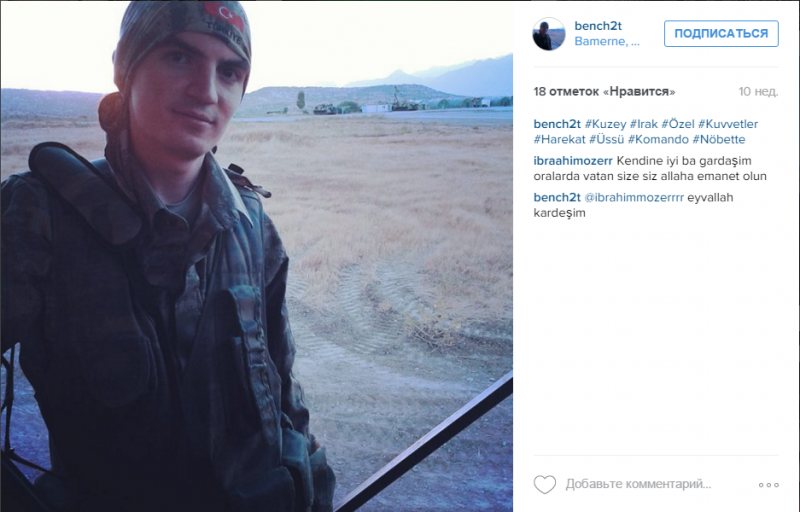 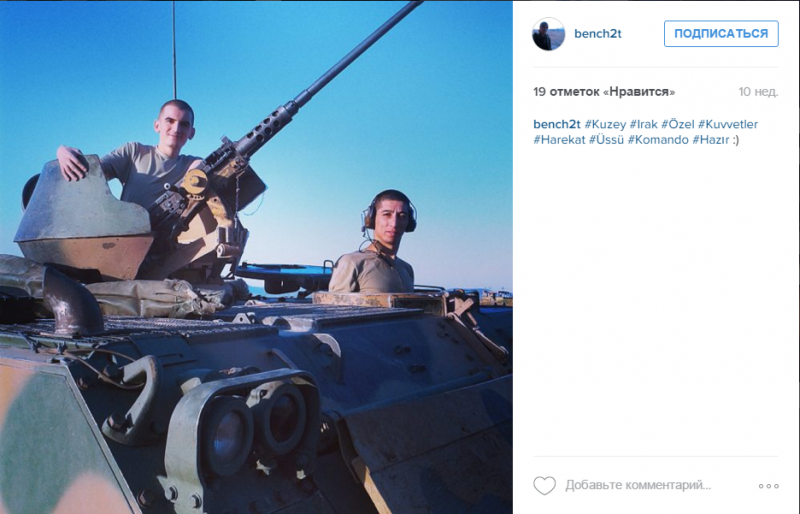 A photo posted on Twitter in March 2015 shows a similar low loader transporting a vehicle allegedly to the Bamerne airbase:

Similar vehicles can be seen on other photos of Turkish convoys, like this one going to the Syrian border (source): 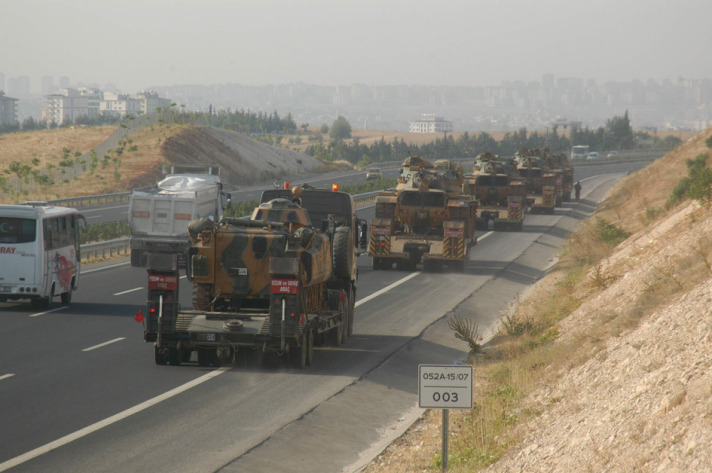 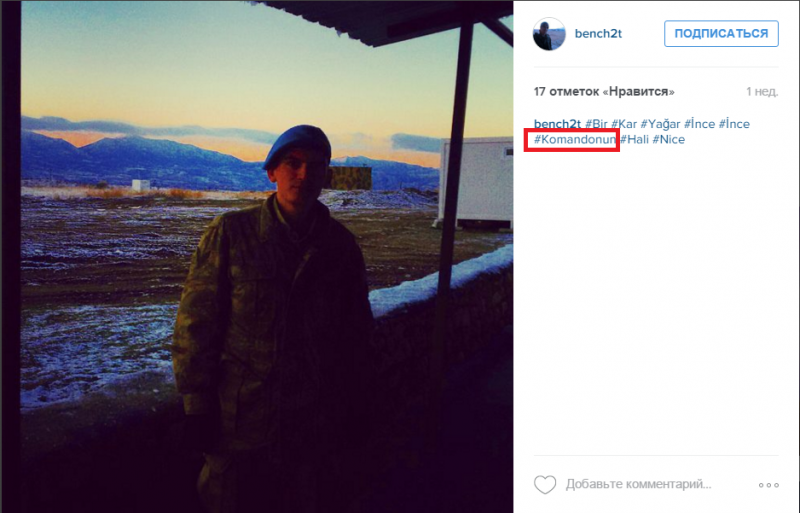 Apart from the Bamerne base, Turkey operates several other bases on the Iraqi side of the border, regularly reported by Kurdish and Turkish media. Photos posted by Turkish soldiers on social networks helped us confirm the presence of two bases (or permanent camps) near the border: in the vicinity of Darsinki and Kani Masi. 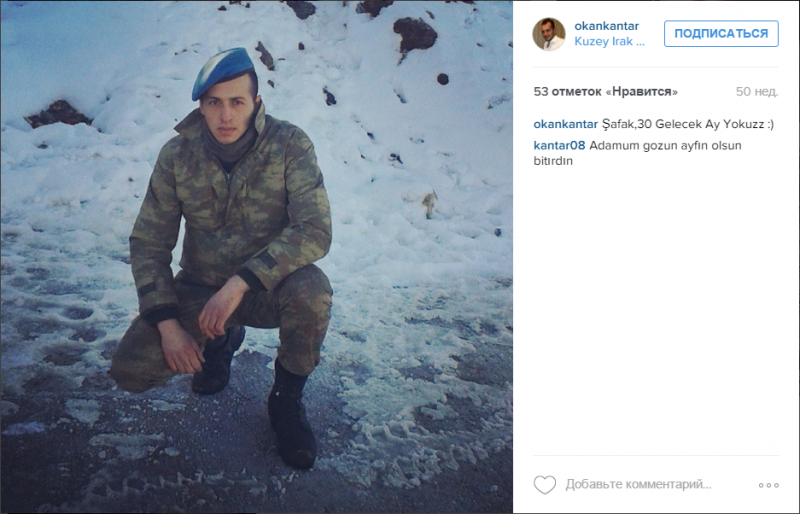 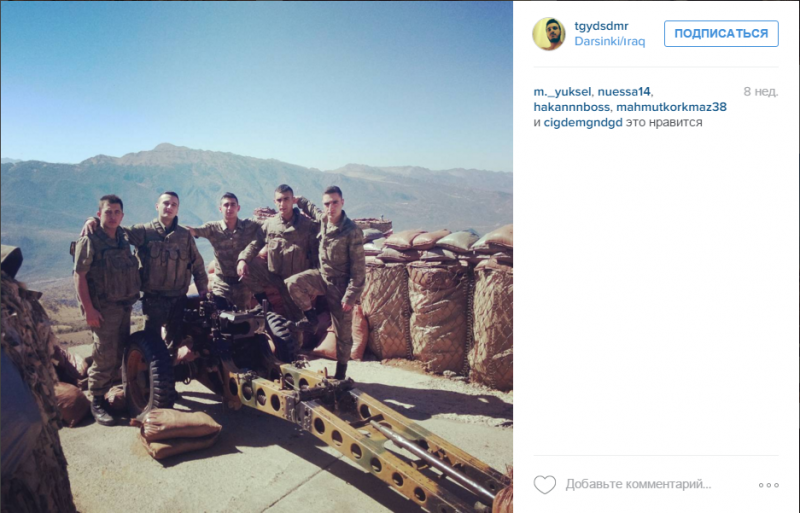 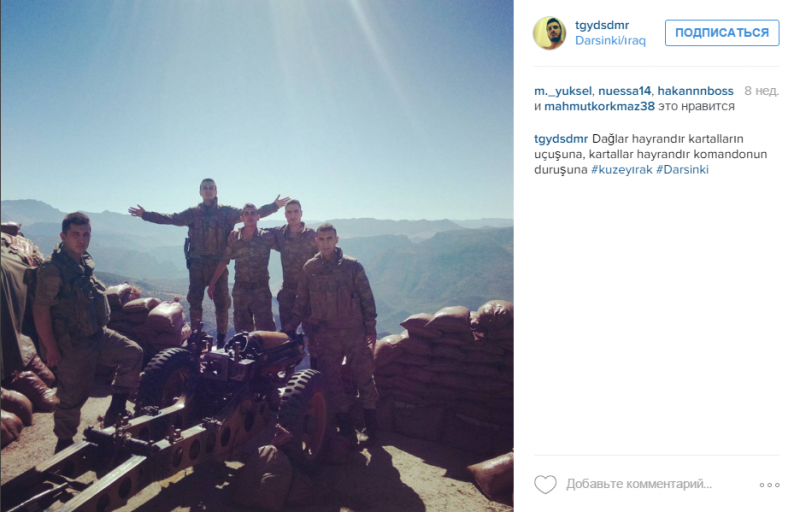 The visible differences of the positions photographed approximately at the same time suggest that there are at least two artillery pieces (М-116 mountain howitzers) deployed at Darsinki.

We matched the landscaape on two of the photos with Google Earth landscape models: 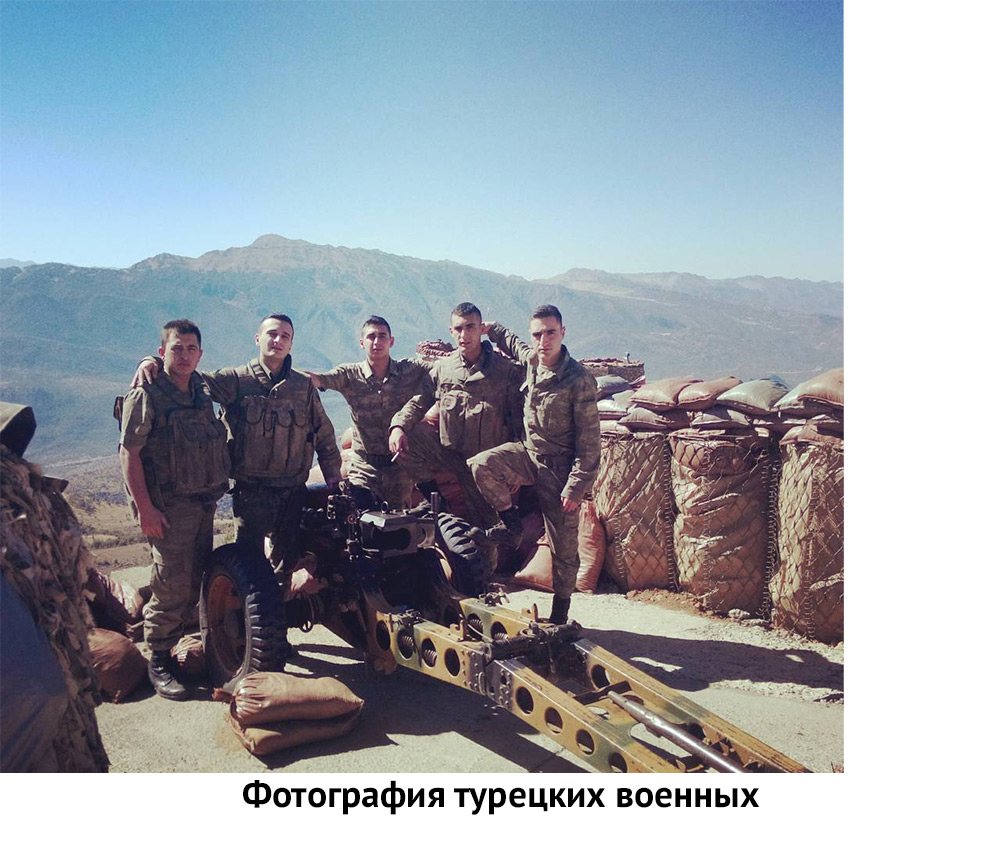 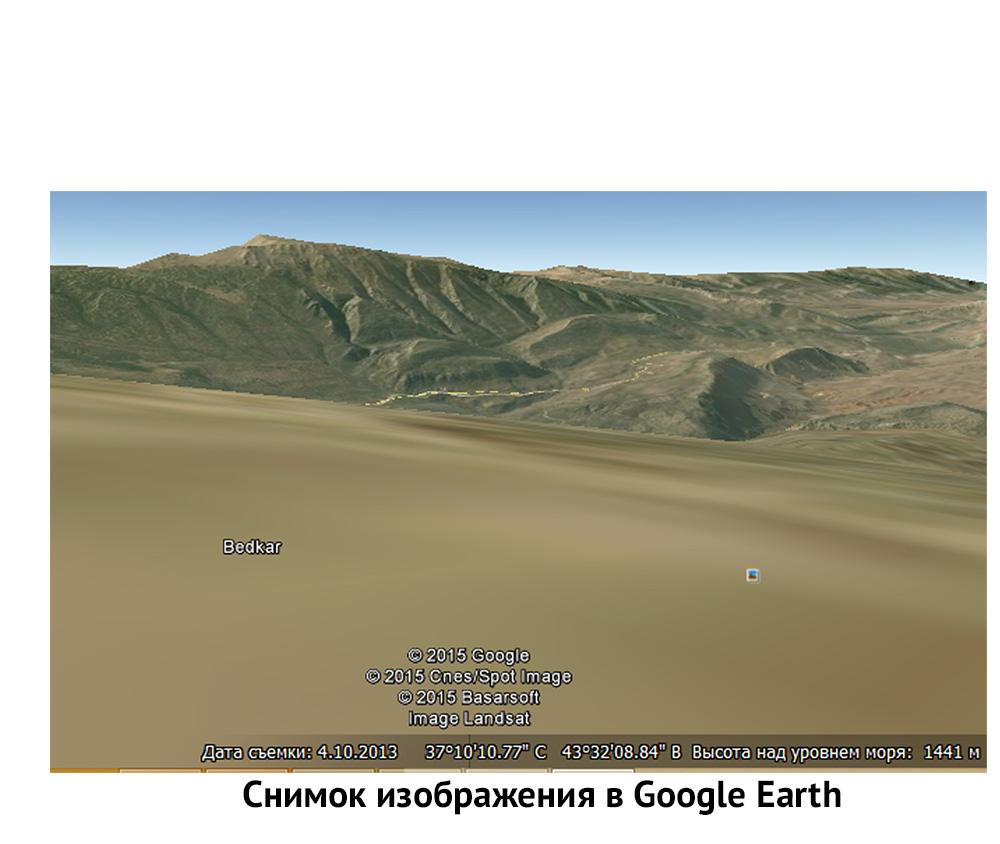 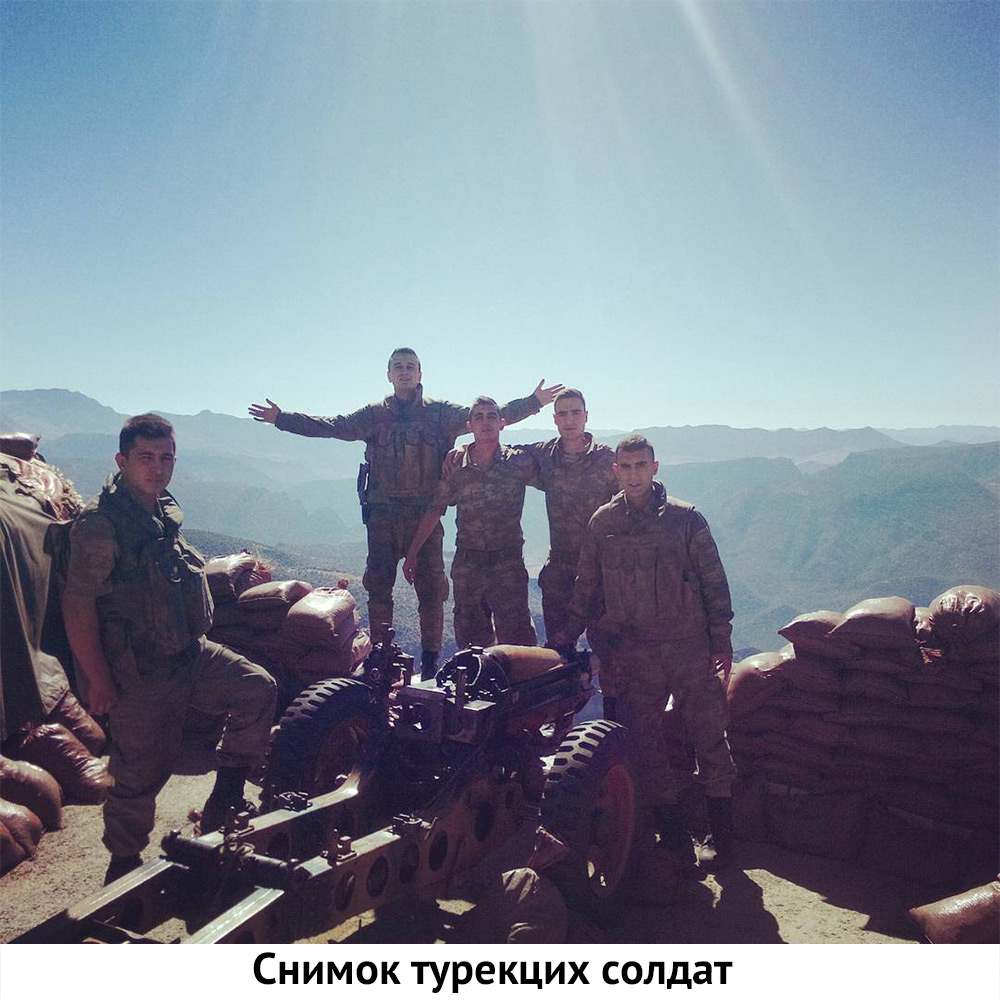 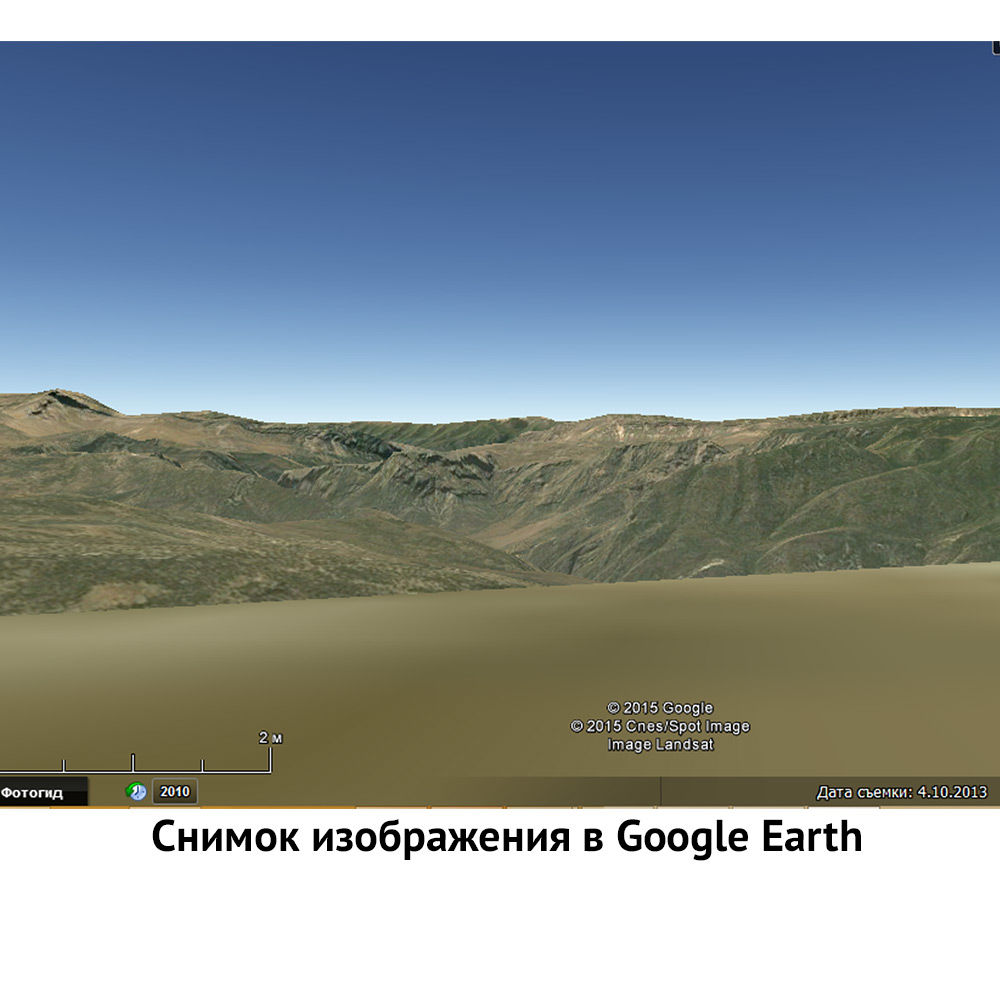 The spot from which such a landscape can be observed is less than 1 kilometer from the Turkish border (Google Maps link). The objects seen on the satellite image may be elements of the Turkish camp and roads leading up to it: 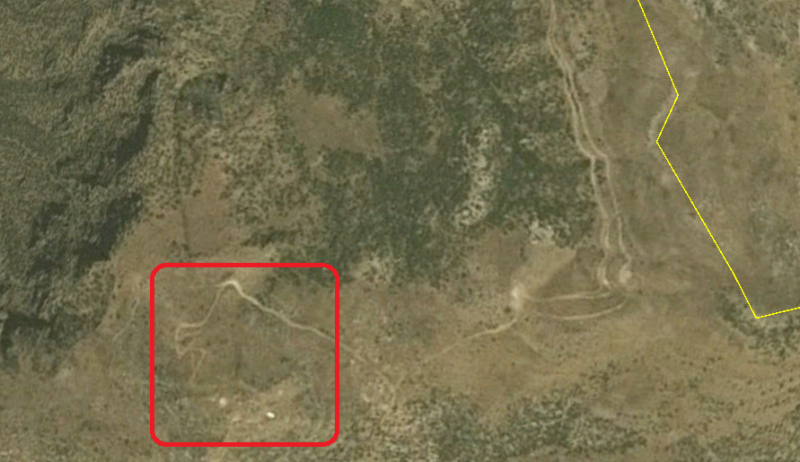 The same spot on Panoramio shows two photos where you can see the Turkish flag: 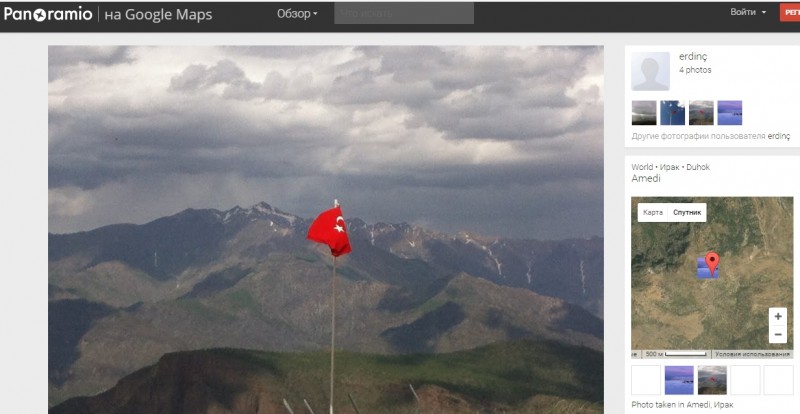 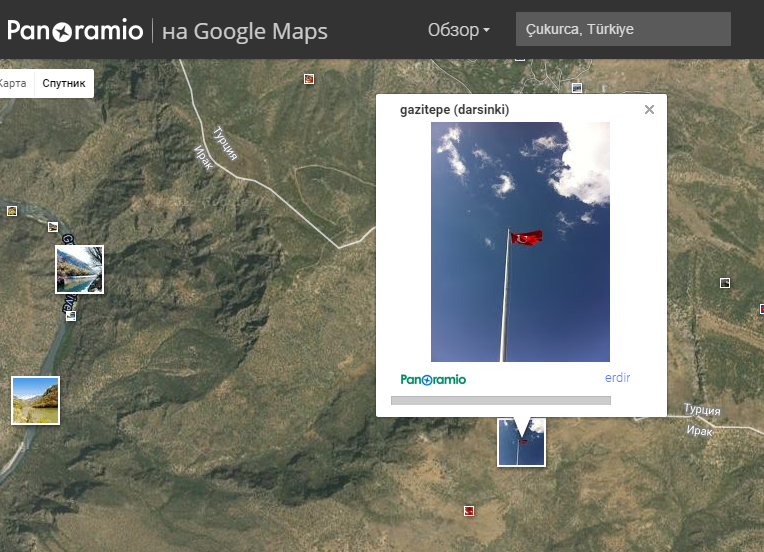 Another large Turkish base mentioned by the media is located near Kani-Masi. Photos, presumably from this base, are shown in a video below: 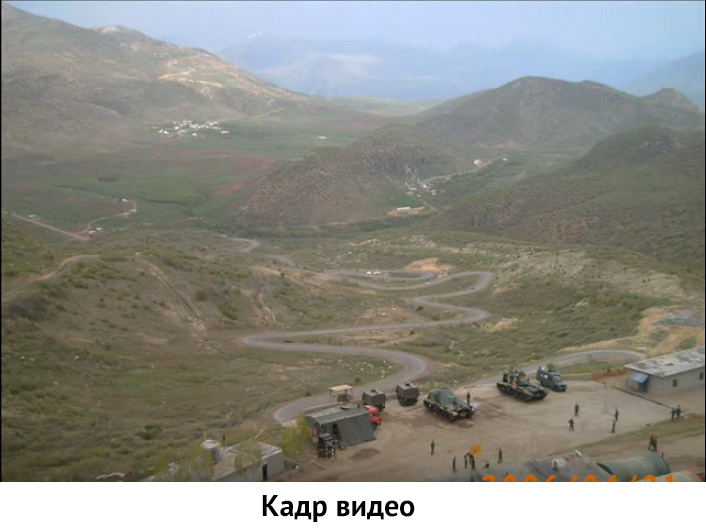 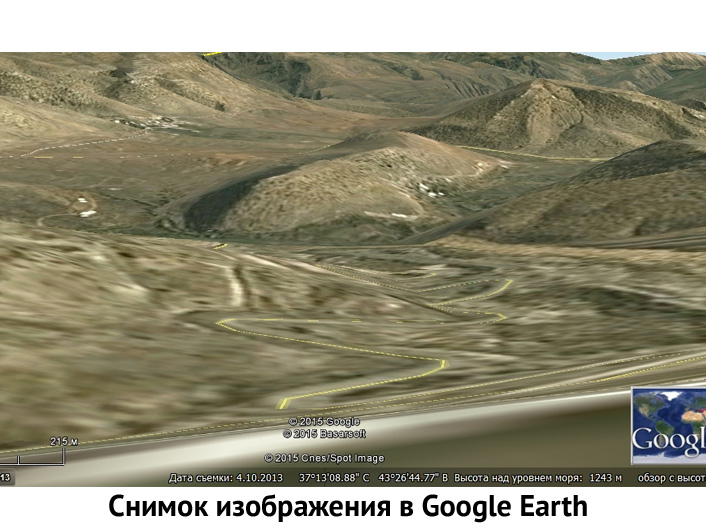 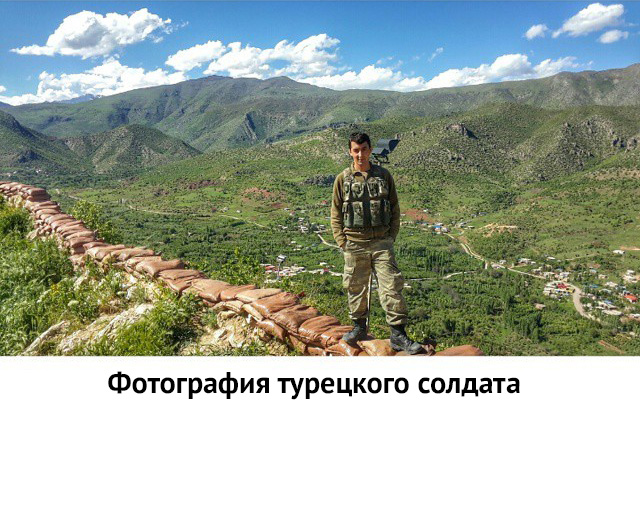 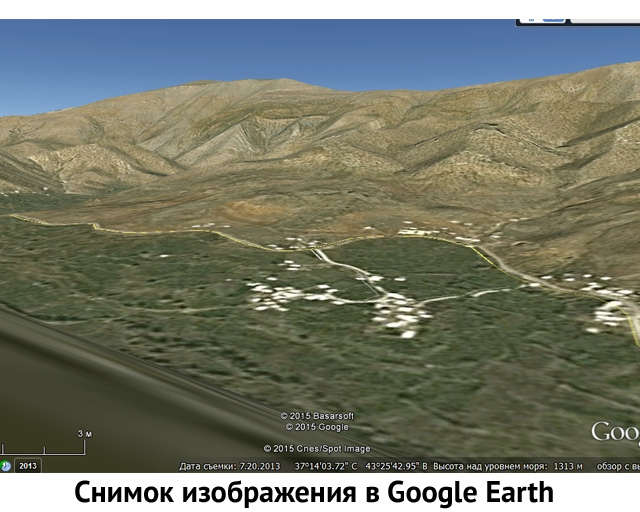 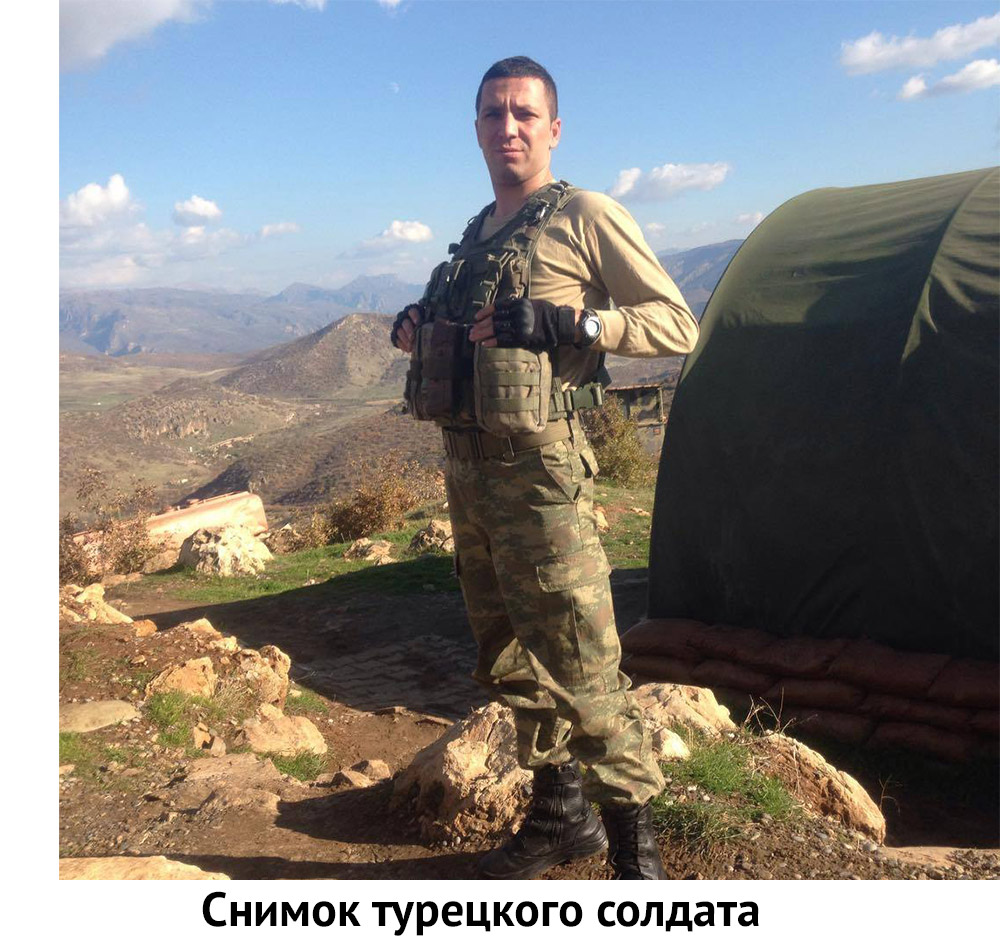 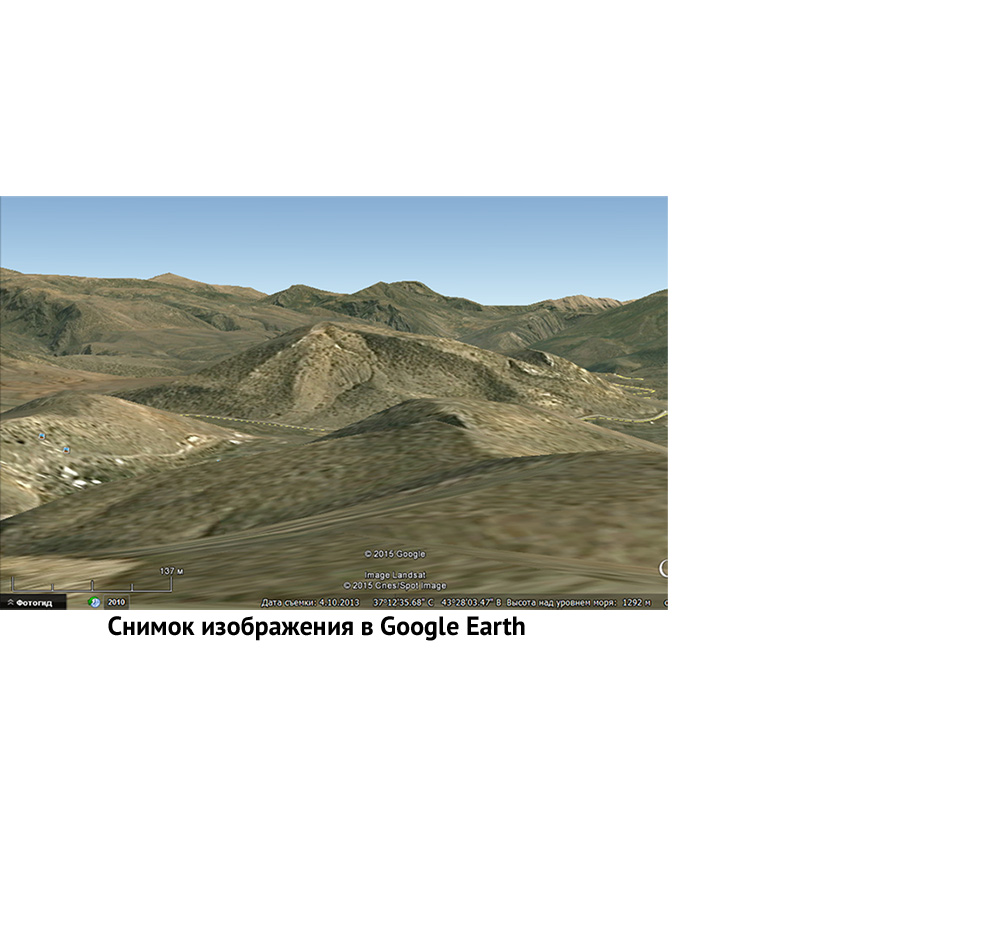 The base is located 5 kilometers from the Turkish border on a commanding point of 1500 meters above sea level (Google Maps link): 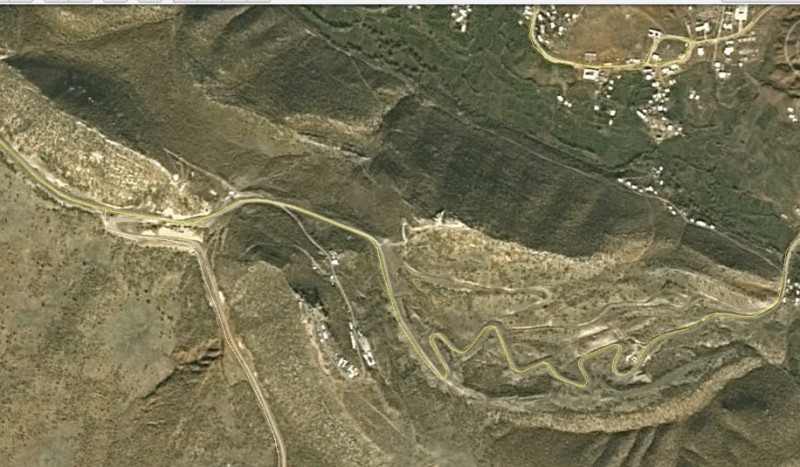 Photos from the related hashtag and geotag show at least one tank, as well as a machine gun position and observation post: 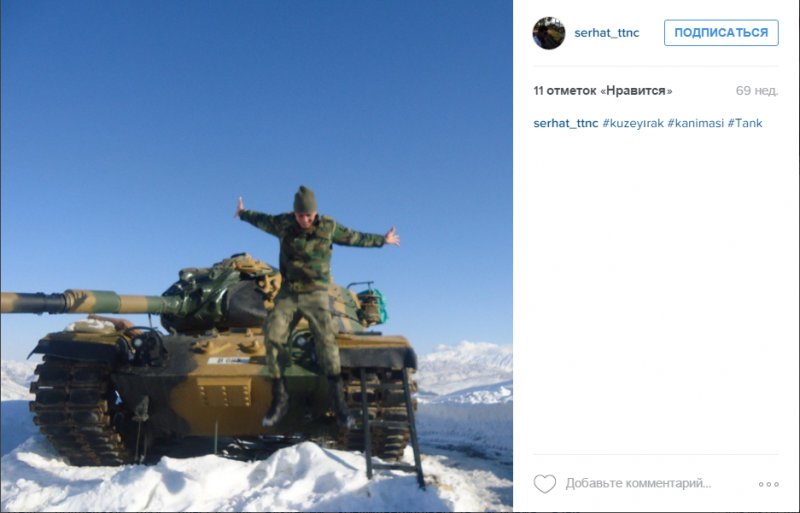 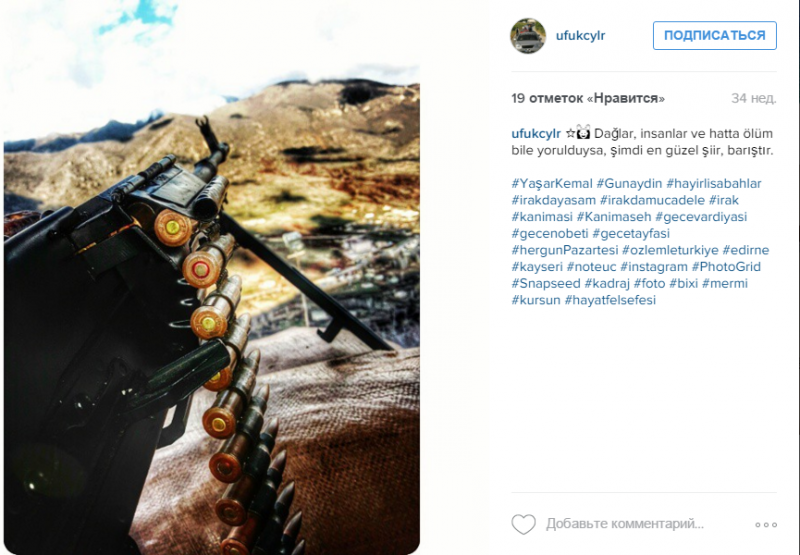 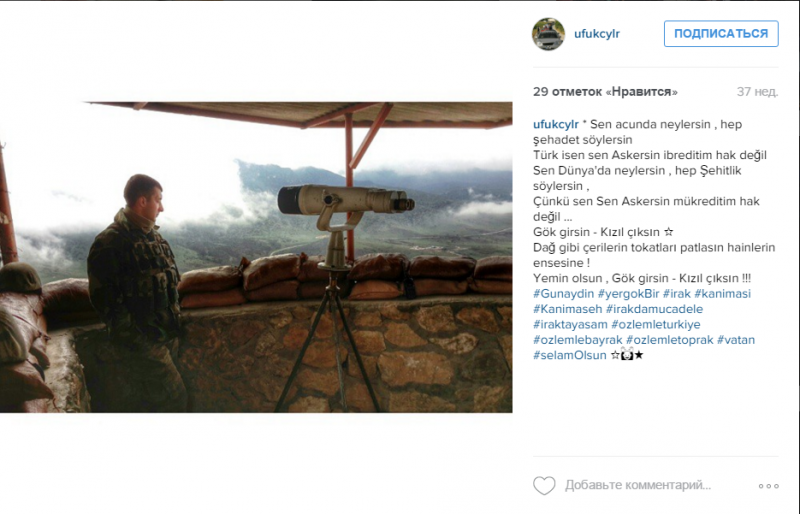 Apart from bases inside Iraq, Turkish troops ae also based on the Turkish sied of the border (see geotag), from where they fire into Iraq, presumbaly at RPK forces, with weapons like UT-1 or NT-1 mortars: 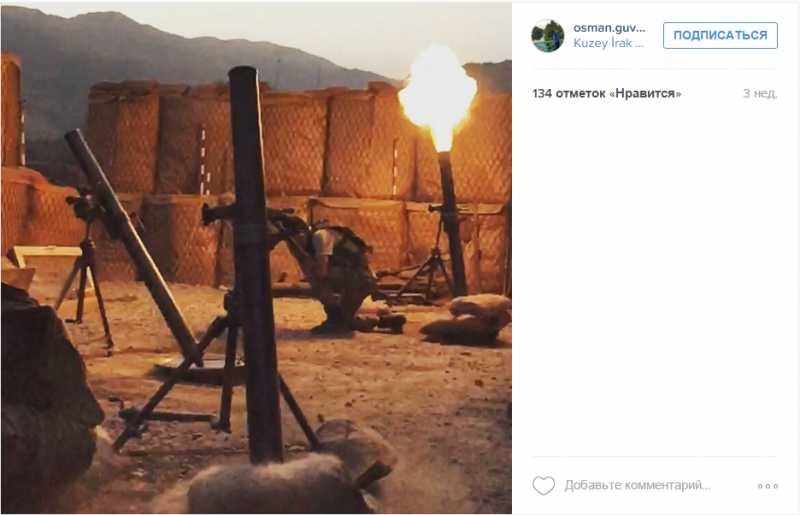 The status of Turkish bases in Northern Iraq

It should be noted that all the bases we have located are situated within the Kurdish autonomous region. The Kurdish Regional Government wasn’t alway welcome to its "guests" — for instance, in 2008 Kurdish Peshmerga militias blockaded the Bamerne base, while the Kurdish parliament addressed the government with a request to demand that Turkey pulls its troops out. However, later the relations presumably normalized: in 2001 Turkish president Erdogan visited Iraqi Kurdistan, while in 2013 Kurdish leader Masoud Barzani paid a return visit to Turkey. In 2014, the parties signed an energy agreement allowing Kurdish oil exports to bypass Baghdad. The Kurdish government probably changed its position towards Turkish bases to a more tolerant one.

In this context, of particular interest is a statement from a member of "Patriotic Union of Kurdistan" party, refuting claims of a Kurdish-Turkish agreement on Turkish bases. If this statement is true, it calls into question the presence of several Turkish baese near the border.

In 2012 Baghdad reportedly intended to cancel the agreements signed under Hussein legitimizing Turkish presence in northern Iraq. It is not known whether the Iraqi parliament canceled the agreement. It should be noted, that during the crisis sparked by Turkish redeployment to the Bashiqa camp the issues of the near-border bases hasn’t been raised.

Thus, the legal status of Turkish bases in Iraq is doubtful, but their legality can’t be independently confirmed or denied.

Turkish troops have been based in northern Iraq for the last 10-20 years. The bases, intended prsesumably to fight PKK separatists, are garrisoned by commandos and tanksmen. Various estimates but the numbers of Turkish soldiers in Iraq, whose legal status in unclear, at 2000-3000. 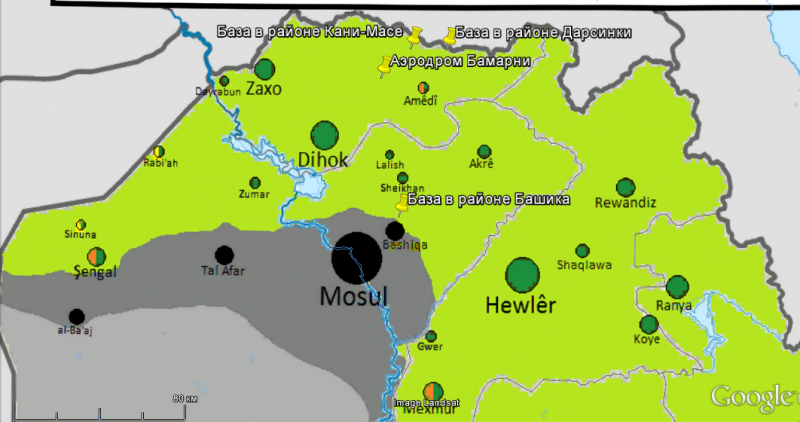 P.S. Special thanks to Ilya A. for help in preparing this report.

It’s been a bit over a month since we started our fundraising campaign. As of now, we have raised a bit over 5% of the required amount. Here’s how you can support our team: