New evidence of Russian incendiary bomb use in Syria

On the night of October 1st to 2nd, reports appeared on Twitter about incendiary bombs being used on a Syrian town of Rastan in Homs governorate.

That night, Syrian pro-opposition media as well as the local Syrian Civil Defense ("White Helmets") unit published several videos on YouTube, showing the airstrike on Rastan and its aftermath. We have compiled a playlist of these videos:

The Homs White Helmets pubished photos on their facebook page showing remains of the incendiary munitions used in the attack.

Photo by the Syrian Civil Defense in Homs governorate

Our team has covered the use of RBK-500 ZAB-2,5SM incendiary cluster bombs against civilian targets in Syria and their presence at Russia’s airbase in Latakia governorate. We have mentioned that incendiary cluster munitions of this type weren’t used in the conflict before the Russian intervention, giving grounds to believe hat they were used by Russian, not Syrian aircraft.

This time, White Helmets found not only ZAB-2,5S submunitions, but also remnants of longer bomblets:

Bellingcat researcher Haid al-Khatib shared with us photos and measurements he obtained from the workers of Syrian Civil Defense in Homs governorate. 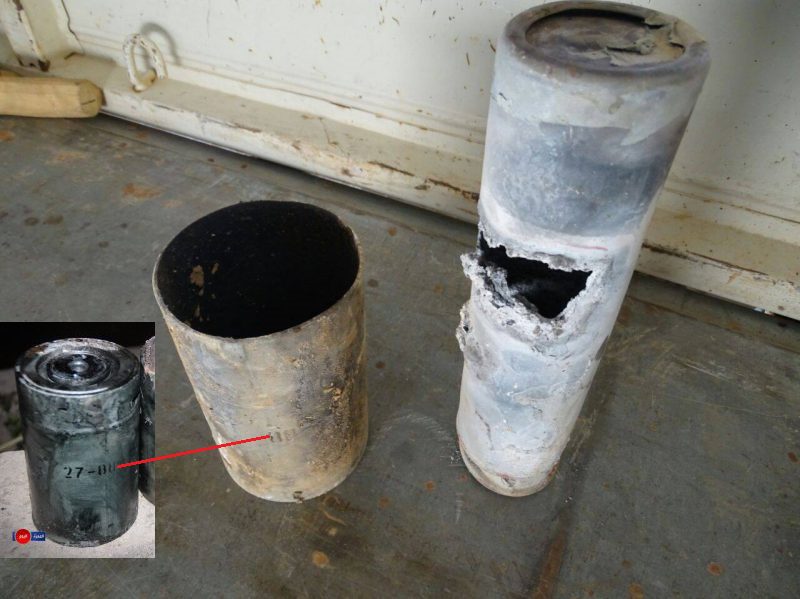 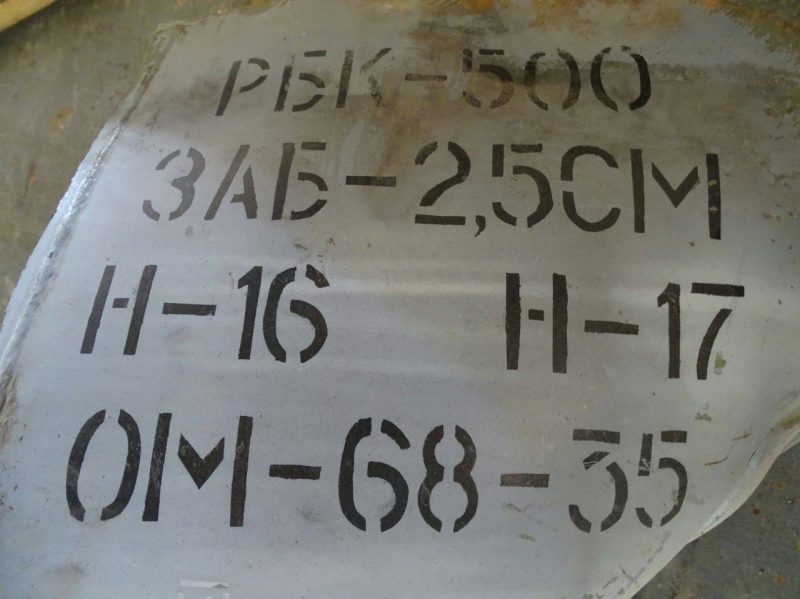 According to open source data, an RBK-500 ZAB-2,5SM incendiary cluster bomb contains three types of incendiary submunitions of two distinct shapes: ZAB-2,5S (9 cm in diameter, 14 cm in length, according to the aforementioned measurements) and ZAB-2,5M-I/ZAB-2,5MII (6 cm in diameter, 24 cm in length, also known as ZAB-2,5M1 and ZAB-2,5M2; we do not know of any external differences between the latter 2 and will collectively refer to them as ZAB-2,5M).

Reference photos of ZAB-2,5M incendiary bombs show distinct holes near one end (absent on ZAB-2,5S bombs). The same holes are also visible on one of the photos taken by White Helmets. The shapes of the munitions also match: 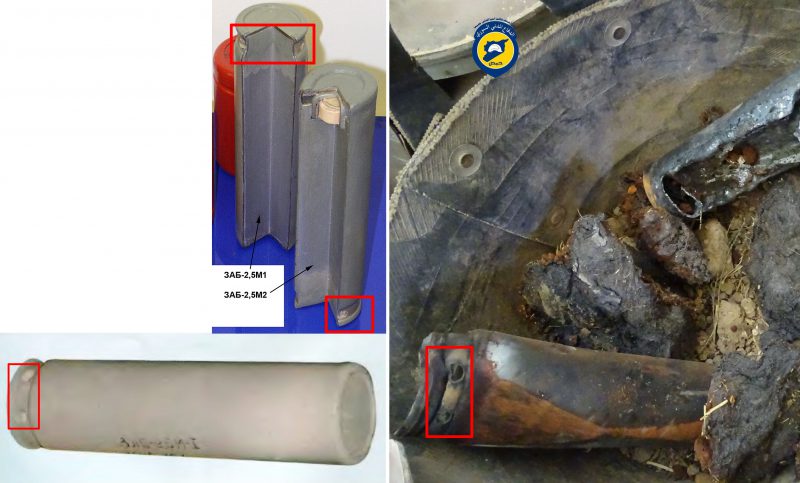 Incendiary cluster bombs, namely RBK-500 ZAB-2,5, have previously been used in Syria by the government air force in 2012, as described by researcher Eliot Higgins in his blog: 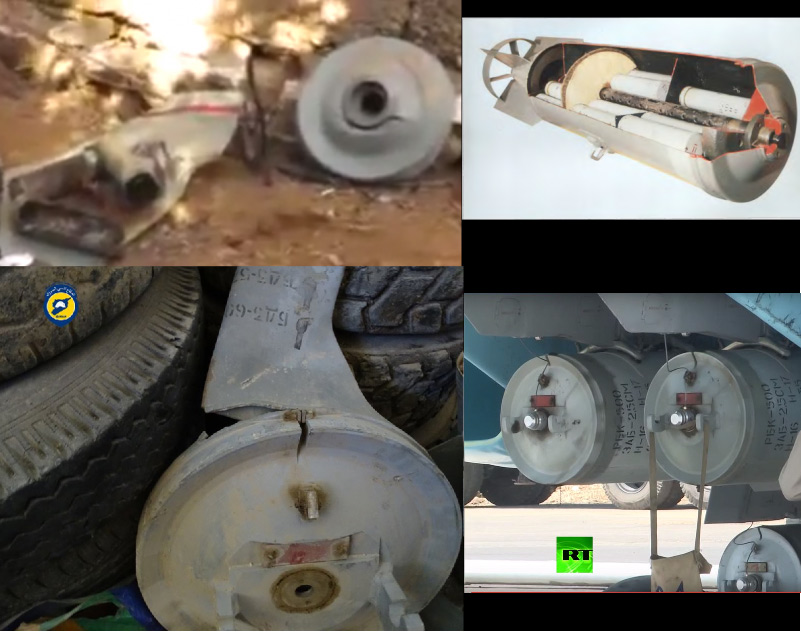 Thus, it is evident that during the night of October 1 to 2, the town of Rastan was hit by a RBK-500 ZAB-2,5SM incendiary cluster bomb equipped with ZAB-2,5S and ZAB-2,5(M) submunitions. The fact that bombs of this type have nott been used before the start of Russia’s operation in Syria suggests that this airstrike was conducted by the Russian Air Force.

The Homs White Helmets as well as the media center of a nearby town of Talbiseh told us that the airstrike occured on a highway between Talbiseh and Rastan (map link). Due to the low quality of the airstrike aftermath videos as well as the fact that they were filmed at night, we were unable to confirm this information.

According to open source data, RBK-500 ZAB-2,5SM hit area is from 20,000 to 80,000 square meters. Assuming the impact area is either round or has a shape close to it, simple math yields a radius of such circle from 80 to 160 meters. An overlay of these radiuses over a satellite map yields the following picture: 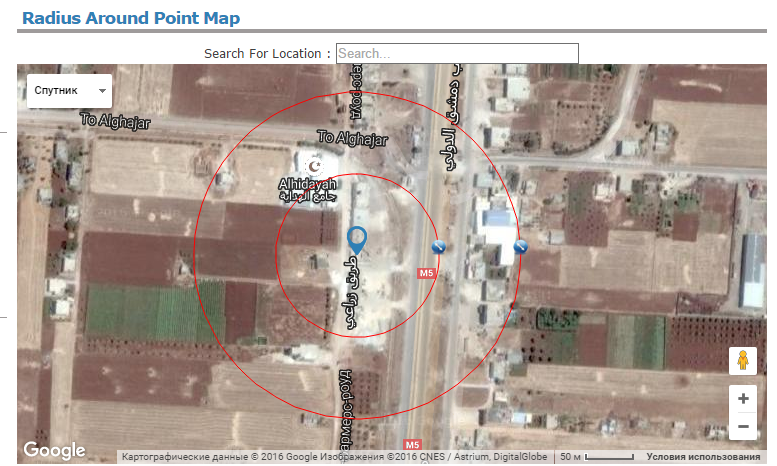 The radius clearly covers several houses with gardens. However, we cannot verify if they are still inhabited. If that is the case, then the UN convention on "inhumane" weapons would forbid the use of incendiary munitions in this area. The legal aspect of this issue is covered in more depth in a Human Rights Watch dispatch on incendiary bomb use in Syria.

During the night of October 1 to 2, an area betwen Rastan and Talbiseh, controlled by anti-Assad forces, was hit with incendiary air-delivered bombs. The munitions’ remains show that an RBK-500 ZAB-2,5SM incendiary cluster bomb was used in the airstrike. This type of bomb hadn’t been used in Syria prior to the Russian intervention, but was filmed in June 2016 at Russia’s Khmeimim airbase. The bombing was possibly conducted near a "concentration of civilians", which is a violation of a UN convntion restricting the use of "inhumane" weapons.

P.S. Special thanks to Bellingcat researcher Hadi al-Khatib for help in preparing this post.