Airstrikes on UN Aid Convoy in Aleppo: Claims and Reality

In the morning of September 19, the 31-truck convoy started its journey from the Syrian regime-controlled part of Aleppo, crossed the frontline in the early afternoon and proceded to the town of Orem al-Kubra (controlled by anti-Assad forces) about 10 km west of Aleppo city, where it later came under attack.

According to a UN representative, the convoy’s passing was approved by Syrian and Russian authorities.

During the time since the tragedy, a lot of new data emerged on it, which will be analyzed in this post.

In the evening of September 20, the Russian Ministry of Defense (MoD) published an “analysis” of their drone footage of the UN-SARC convoy. According to the MoD, “terrorists transported a pickup truck towing a mortar” together with the convoy. 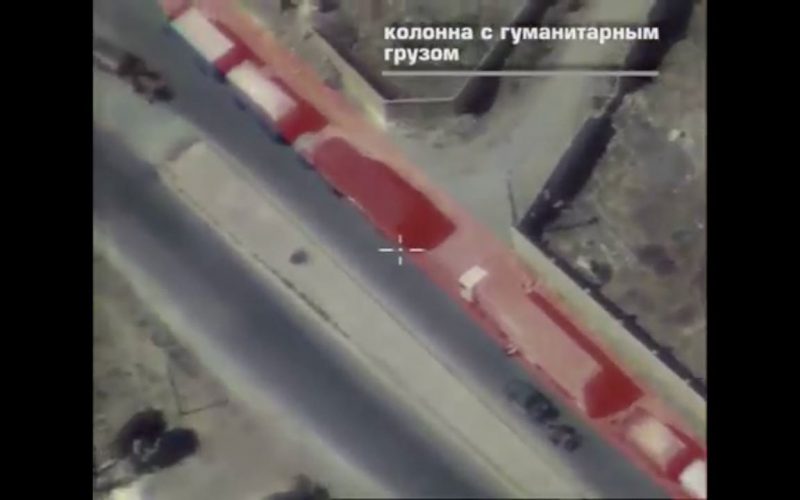 In the video, the convoy can be seen standing at the side of the Idlib-Aleppo highway, with a pickup truck towing what looks like a mortar going past it.

Twitter user @obretix has geolocated this video as filmed near Khan al-Assal, over 6 kilometers from the site of the airstrike on the convoy. 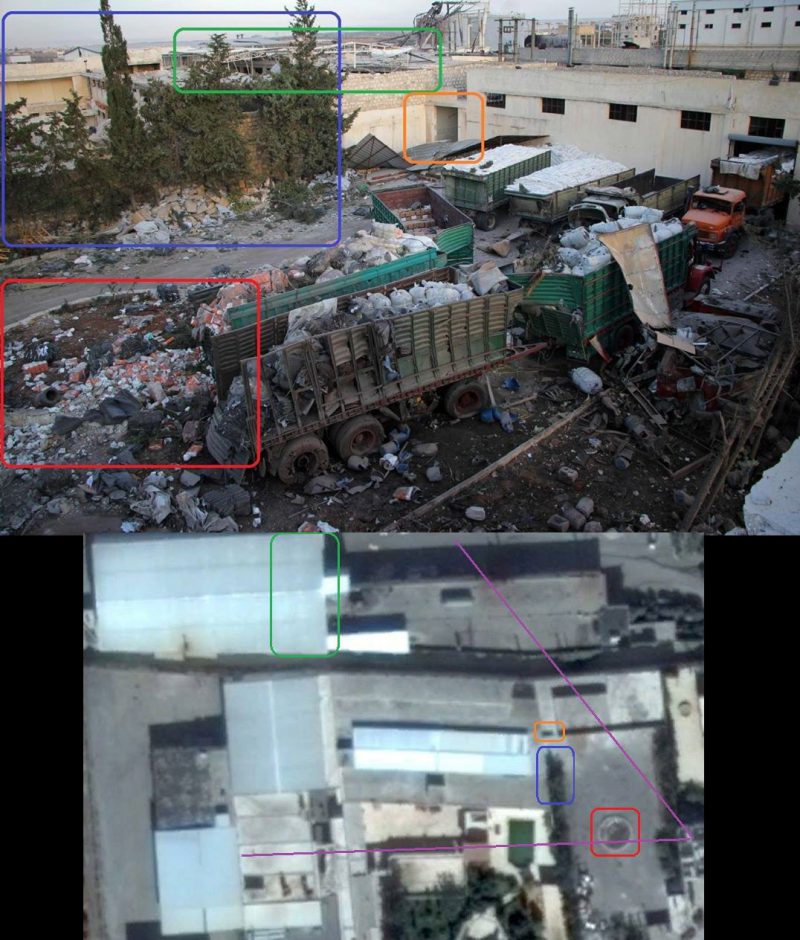 Moreover, shadow analysis of the video shows that it was filmed no later than 2 PM since the part of the fence marked in the image is not in the shadow. 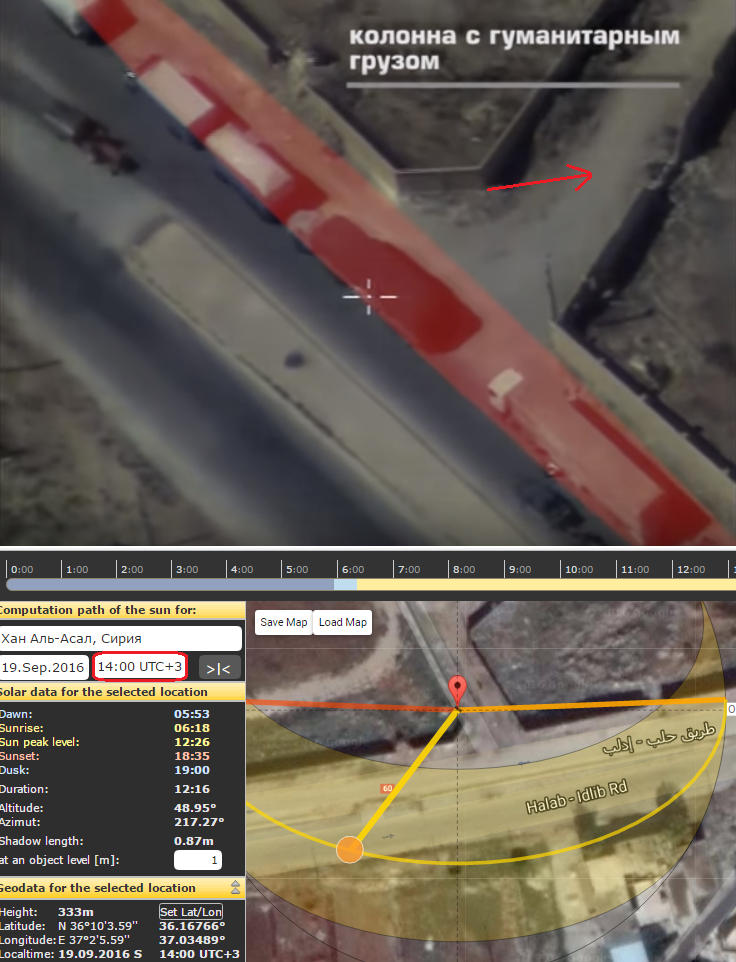 According to the official statement of the Syrian Civil Defense (“White Helmets”), the first airstrike on the convoy took place at 7:15 PM, i.e. over 5 hours after the pickup truck allegedly towing a mortar passed by the convoy. This is supported by the fact that all airstrike videos were filmed in total darkness, which, according to SunCalc, fell on September 19 in the area at 7 PM.

Two more false claims were made by the Russian MoD:

Who bombed the convoy?

The US officially claimed the humanitarian convoy was bombed by either Russian or Syrian aircraft since no other party bombs the area. White House places the responsibility on Russia because Russian authorities were responsible for upholding ceasefire in the area.

Privately, US officials claim two Russian Su-24 bombers were in the area when the airstrikes took place. According to a WSJ source, US surveillance tracked the two jests from their takeoff from Russia’s Khmeimim airbase to the site of the airstrike. It should be noted that doing sorties in pairs is characteristic of the Russian Air Force. While the Syrian Arab Air Force does field Su-24s, they conduct only solitary sorties.

Another indication that RuAF took part in the convoy bombing is a video filmed during the airstrikes. In the video, jets flying and helicopter cannon fire can be heard, while the cameraman says “al-tayrat al-harbi al-Rusi”, meaning “Russian warplanes”.

This video also disproves a hyphothesis suggested by Kremlin media citing the MoD – that no airstrike actually took place.

Finally, a pro-Assad Twitter user wrote at 9:17 PM (2 hours after the first airstrikes on the convoy), citing fighters from a pro-Assad unit “Ba’ath Brigades”, that RuAF bombed a weapons and ammunition convoy belonging to Jabhat al-Nusra terrorists. Since there is no evidence that any other convoys were destroyed in the evening of September 19 in western Aleppo province, it is likely that the source was mistaken as to the contents and ownership of the convoy and that in fact it spoke of the same humanitarian convoy bomber by RuAF.

However, a SCD volunteer who commented on the incident during the first hours after the airstrikes, claimed a Syrian regime helicopter dropped barrel bombs on the convoy. He noted that after the rescuers arrived to the site, more airstrikes took place.

According to the aforementioned White Helmets statement, both Russian and Syrian aircraft are believed to have conducted the airstrikes. This is corroborated with a video showing a piece of metal resembling a barrel bomb lid as well as an AFP photo most likely showing the tail of an OFAB-250-270 high explosive fragmentation bomb extensively used by the Russian Air Force in Syria. 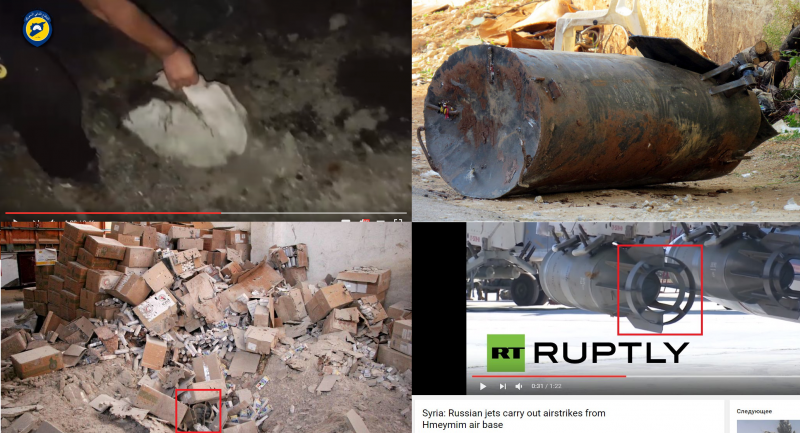 The information discussed above allows us to make the following conclusions: