Was the Russian Mi-35M destroyed by friendly fire?

In the evening of July 8, "Amaq agency" (a media close to IS) reported that a Russian helicopter was shot down during an IS attack on Palmyra. They also claimed three Syrian army checkpoints were captured.

Several hours later, the Russian Ministry of Defense’s press service issued a statement denying the loss of the attack helicopter:

On July 9, lenta.ru reported citing own sources at the MoD that a Russian Mi-35 was indeed shot down, killing two Russian servicemen: pilot Ryafagat Habibullin and operator pilot Dolgin. Ryafagat Habibullin was a colonel and commanded the 55th separate army aviation regiment based at Korenovsk airbase in Krasnodar region. Due to his high rank and post, the colonel was repeatedly featured in media reports and blog posts. We found a post in social media mourning for the colonel. It was posted by a Russian serviceman based near Krasnodar: 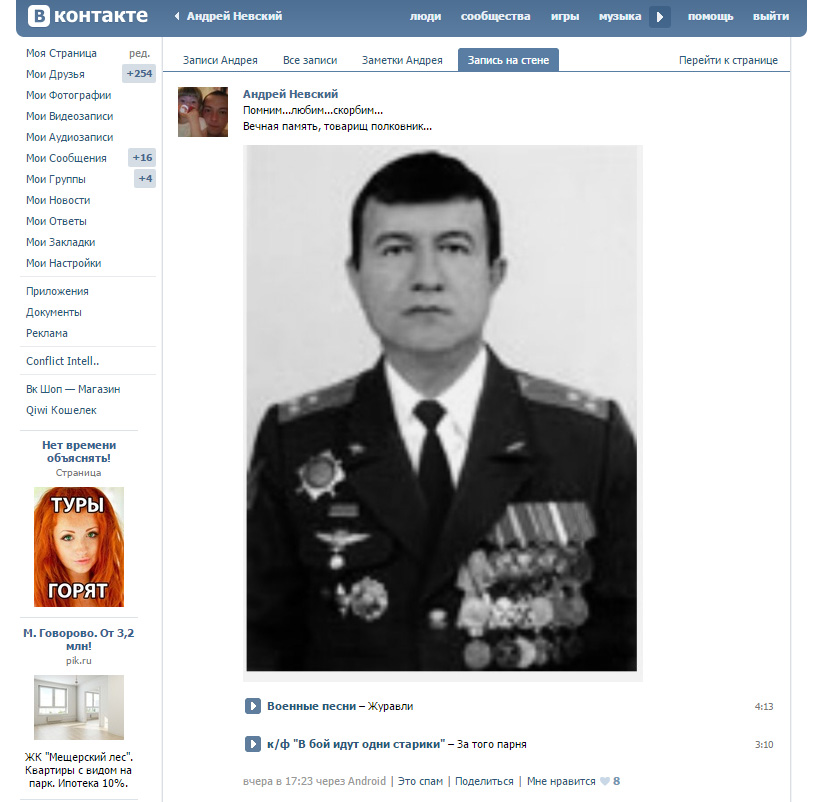 After the pilots’ names were reported, the MoD issued another statement, confirming the deaths of two Russian soldiers but denying it was a Russian helicopter:

On July 8, Russian military instructor pilots conducted a test flight of a Syrian Mi-25 helicopter (export version of the Mi-24 helicopter), when it received a request from the Syrian authorities to carry out airstrikes against a large group of Daesh terrorists advancing to the east of Palmyra, the ministry said.

"The crew received a request from the Syrian unit’s command to strike the advancing fighters. The captain, Ryafagat Khabibulin, made a decision to attack the terrorists. The skillful actions of the Russian crew thwarted the terrorists’ advance.

When the helicopter’s ammunition was spent and it changed its course to the opposite direction, it was shot down by terrorists from the ground and crashed in an area controlled by the Syrian government army. The helicopter’s crew was killed."

In the evening of July 9, ISIS posted a video of the Russian-crewed helicopter falling:

By matching the landscape in the video to Google Earth landscape model, we have found out that the video was filmed east of a grain silo east of Palmyra: 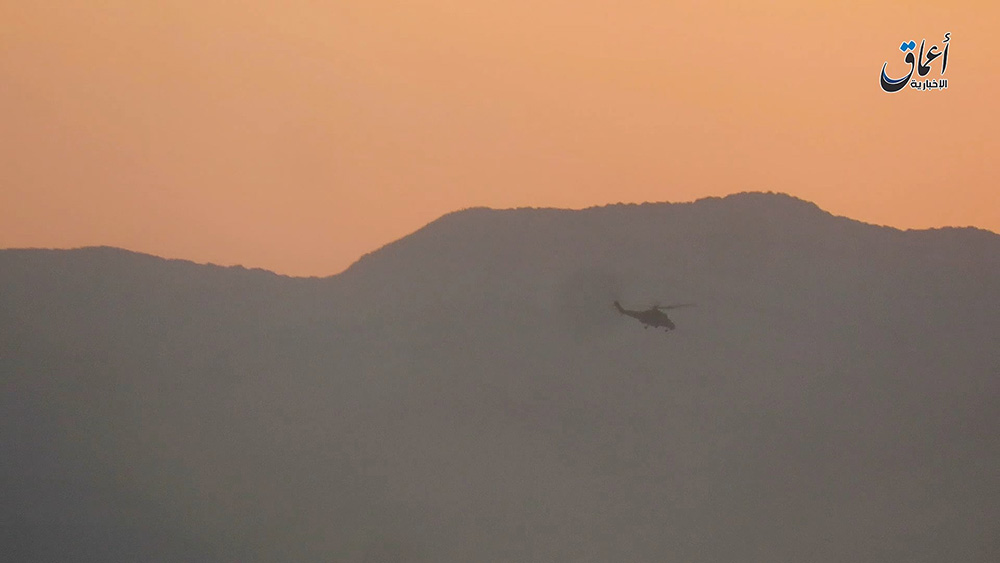 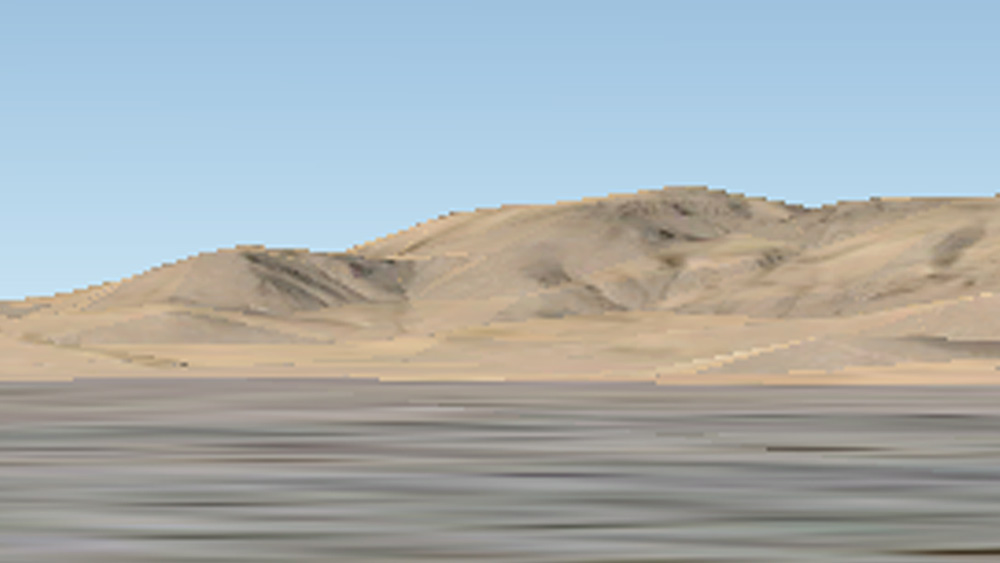 Whose helicopter was it and what was its model?

We have studied the high-resolution source of the recording and found out that the destroyed helicopter had non-retracted landing gear and short wings, which are distinct features of a Mi-35M helicopter: 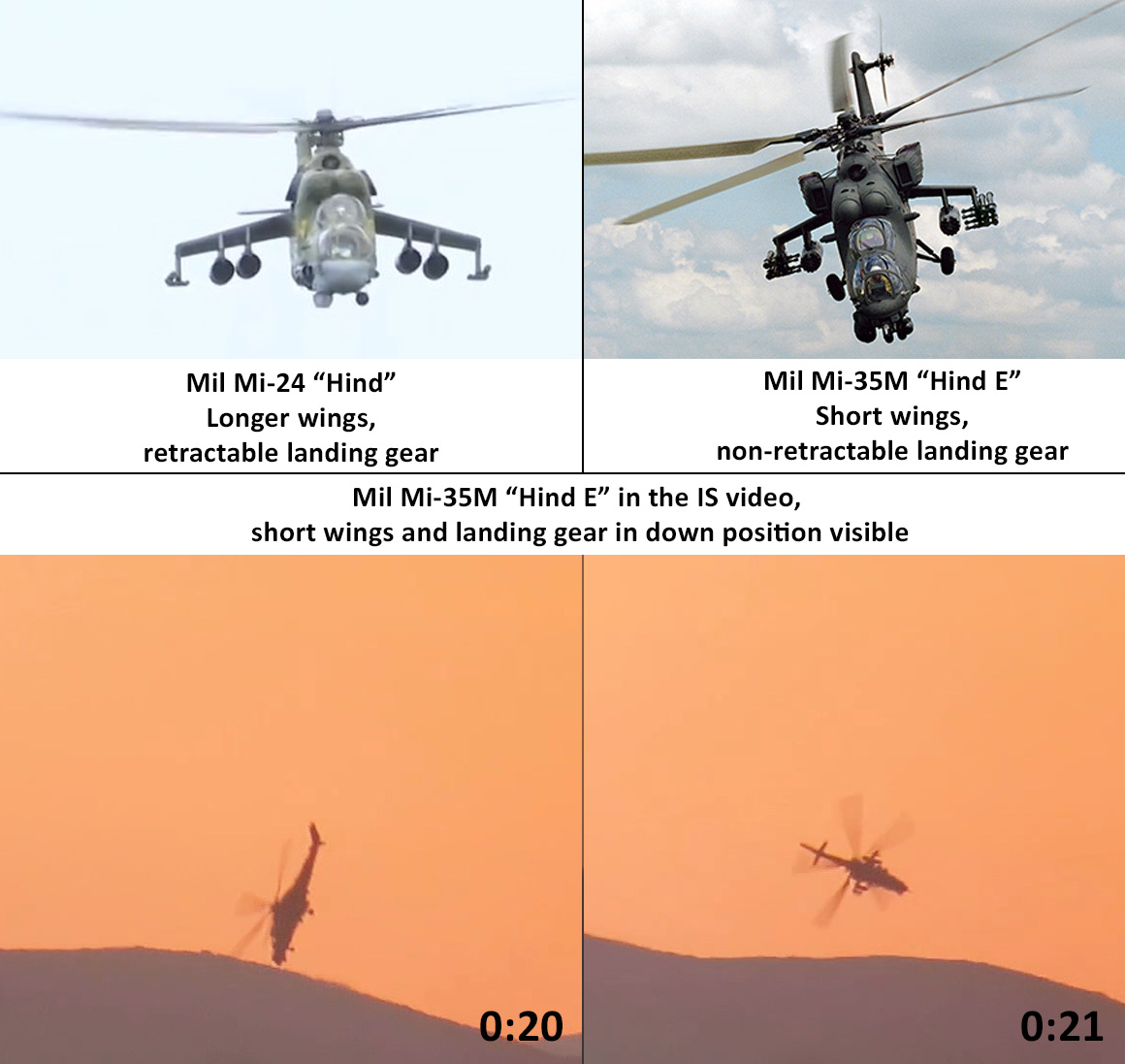 The SyAFF (Syrian government air force) does not have Mi-35Ms. However, RuAF (Russian Air Force) Mi-35Ms have been spotted numerous times in photos and videos from Syria: 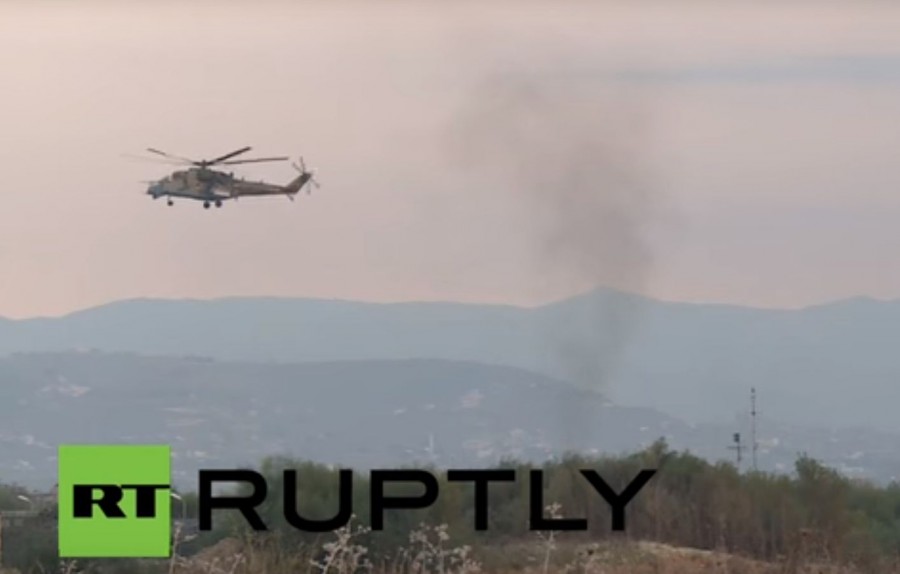 This drives us to the following conclusion: The helicopter that went down in Syria was Russian and had a Russian crew.

What was the cause of the helicopter’s fall?

The Russian Ministry of Defense has claimed the helicopter was shot down with a US anti-tank guided missile TOW. However, during the Russian campaign in Syria, there have been no reports of IS militants capturing TOWs or their appearance in their possession. However, TOW missiles, just like other wire-guided ATGMs, can’t hit attacking helicopters due to low speed and maneuverability. For example, Fagot ATGM, which, just like TOW, is wire-guided, is intende for targets slower than 60 kph. However, many commenters assess the helicopter’s speed as 200-300 kph.

Was the helicopter shot down with a MANPADS (Man-portable air defense system)?

The engines of all modern MANPADS use composite propellants which produce a think smoke trail not visible in the video. This suggests the MANPADS theory is less likely.

The video shows that right before the shootdown, the helicopter launches unguided rockets, each one leaving a smoke trail going below the helicopter:

However, when the helicopters steering rotor is hit, we see a similar smoke trail going from above the hit helicopter: 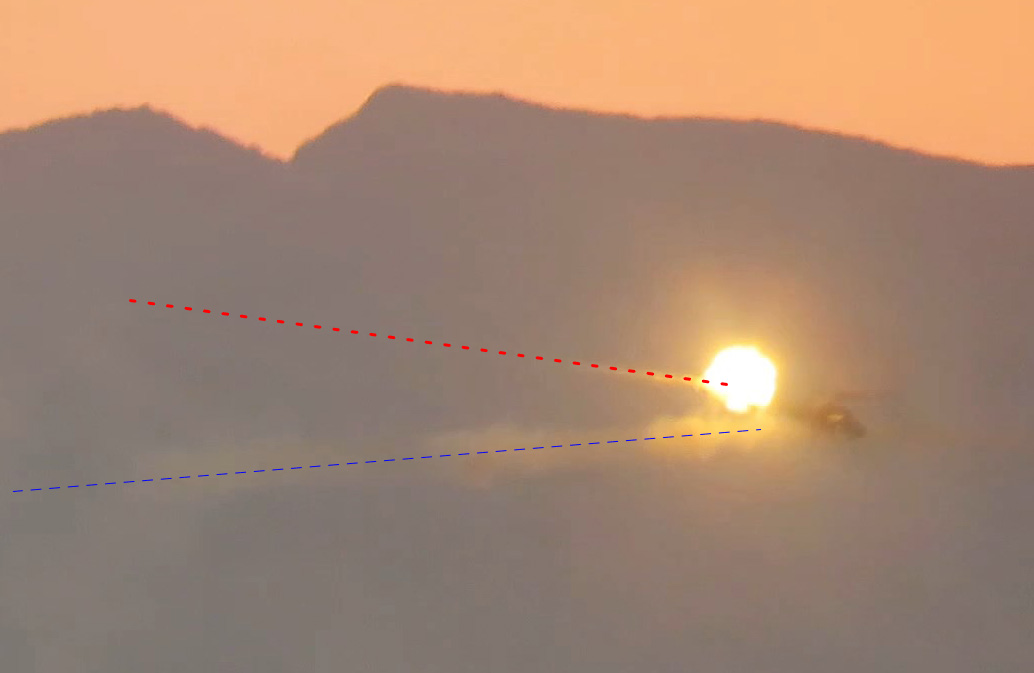 The downed helicopter’s rocket trail axis marked in blue.
The trail of the missile that hit the helicopter marked in red.

The video also shows another helicopter trailing a bit above the leader (later shot down):

All of the above, at the very least, call to seriously consider the theory that the Mi-35M "Hind E" was shot down by accident with the trailing helicopter’s unguided rocket . During combat, the leader could have gotten into the line of fire of the led helicopter that followed it a bit above. This explains why IS did not publish a video of their missile launch.

Out team hope’s the Ministry of Defence treats this incident with a thorough investigation.

Kp.ru has published the name of the second deceased pilot: Evgeniy Dolgin, a 24-year old lieutenant from the town of Ostrov: 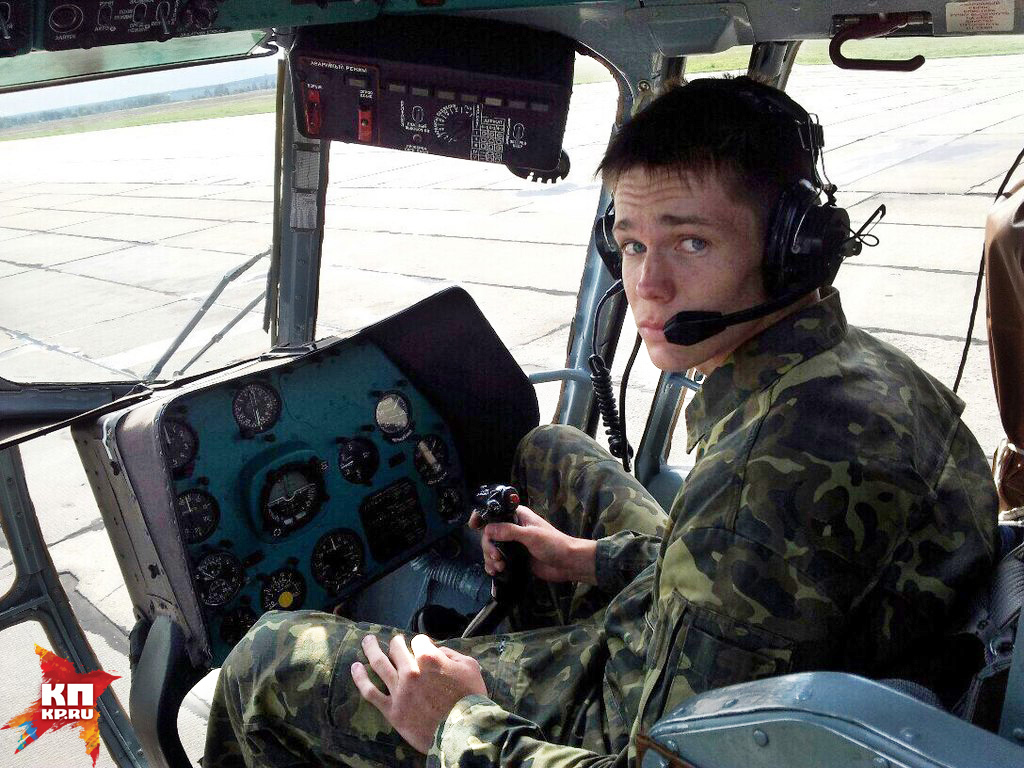 Special thanks to our colleagues @666_Mancer and @bm21_grad for helping in preparing this post.