Airstrikes on schools in Hass: what we know

On October 26, 2016, Syrian human rights watchdogs and international media international mediareported of airstrikes on schools in the Syrian town of Hass in Idlib governorate, which is controlled by anti-Assad forces. According to a UNICEF statement, 22 children and 6 teachers were killed in the airstrike.

France and the US said either Syrian or Russian air force was responsible for the attacks. Russia’s UN representative Vitaliy Churkin called the bombing “horrible” and called to wait for Russian Ministry of Defense conclusions. The Russian military claimed they had nothing to do with the airstrike and accused Syrian Civil Defense of fabricating it. Russian Ministry of Foreign Affairs spokeswoman Maria Zakharova said the photos of the attack’s aftermath were “CGI”.

In this post, we consider the evidence presented by Russia’s Ministry of Defense, lay out our own analysis of open source data related to the attack on schools in Hass and draw a conclusion as to who is likely to be responsible for this attack.

In a comment on attacks on schools in the town of Hass, Russian Ministry of Defense spokesman Igor Konashenkov stated the following:

The Russian Ministry of Defense also published 2 images, presumably taken from a UAV, which they claim show no traces of an airstrike (roof damage or impact craters).

Was there an airstrike?

Contrary to the claims of the Russian MoD and MFA, there is ample evidence indicating that at least two schools in Hass were indeed hit with airstrikes. Apart from claims from activists, human rights watchdogs and Syrian pro-opposition media, there are also more than enough videos showing airstrikes on the town of Hass and their aftermath. We have compiled a playlist of 26 such videos uploaded on October 26 and 27, the day of the airstrike and the day after.

We managed to locate the approximate filming location for three such videos filmed from two different points (video 1 and video 2 were filmed from Basqala to the south-west of the airstrikes’ site, video 3 was filmed from a southeastern direction). Another video, filmed from Hass itself, was geolocated by Twitter user @wasc_algonquin.

As you can see, the filming directions from all three points meet in an area in southeastern Hass adjacent to the school complex. According to a message from the local Syrian Civil Defnse unit, the area was hit with a total of eight parachute-retarded bombs.

The large number of airstrikes and a multitude of video evidence may explain one of the statements made by the Russian Ministry of Defense: “Video footage of an alleged air strike on the Haas settlement, published by some foreign media outlets, is more than ten edited fragments assembled together, shot at different times of day in different resolutions”.

According to geolocation performed by German journalist Julian Roepcke, at least two of those airstrikes hit the grounds of two different schools:

I located the two exact impact points of both #Russian parachute bombs.
Two of the three school complexes in the area were hit. pic.twitter.com/IZacPN4oRz

Interestingly enough, the damage made by those airstrikes (in particular, the destruction of school fences) is visible in the Ministry of Defense image dated October 27. 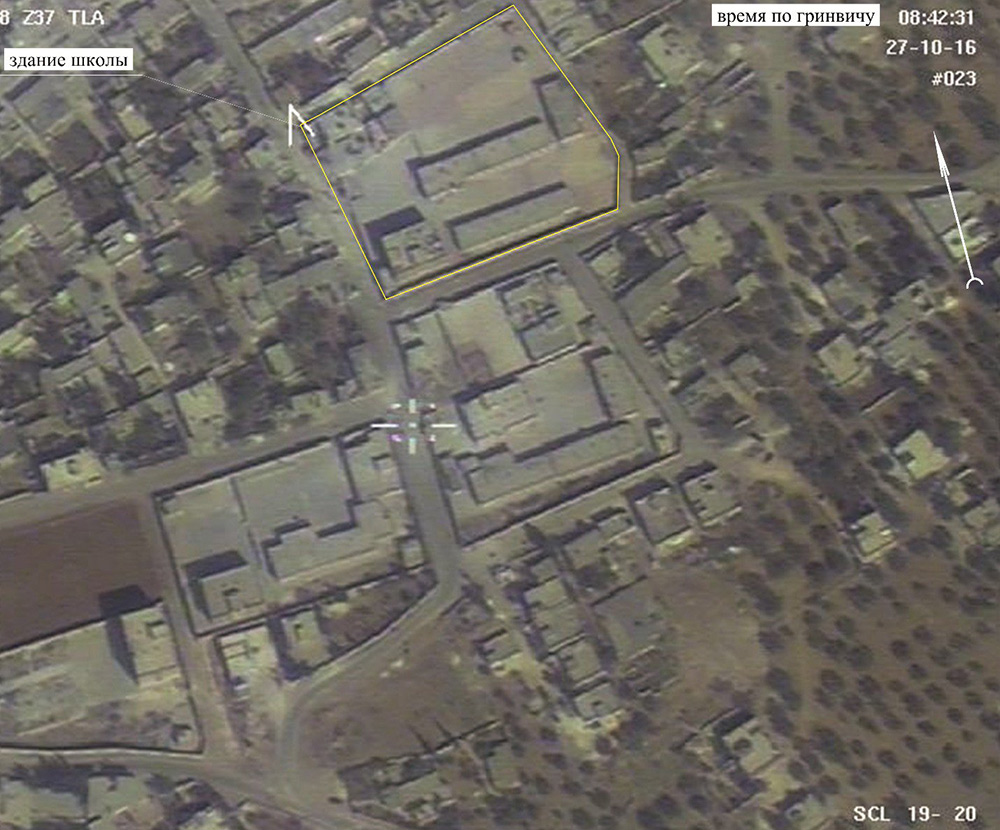 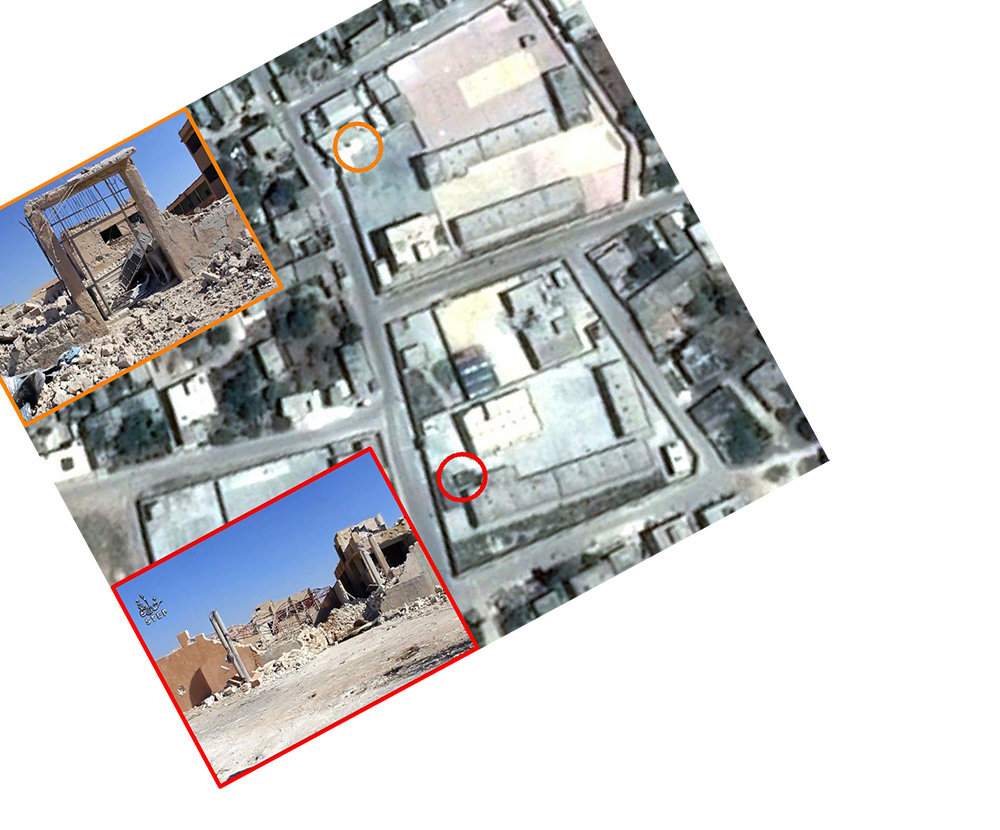 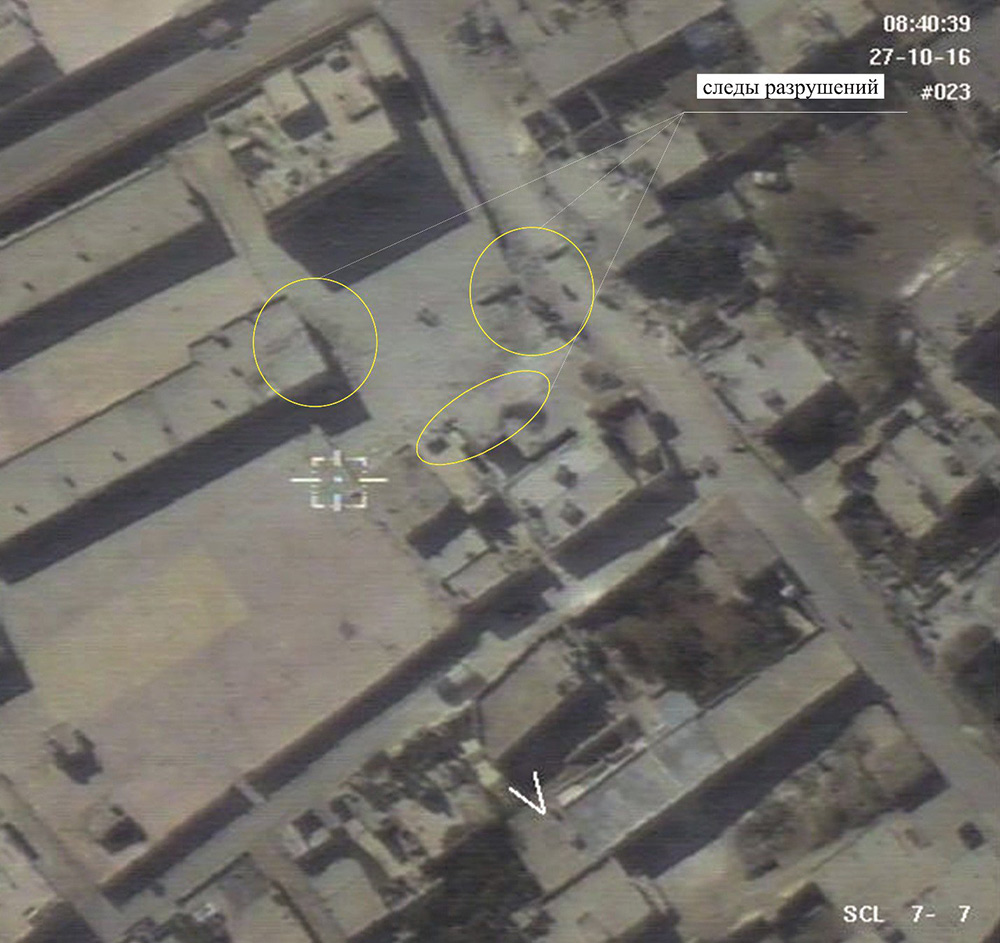 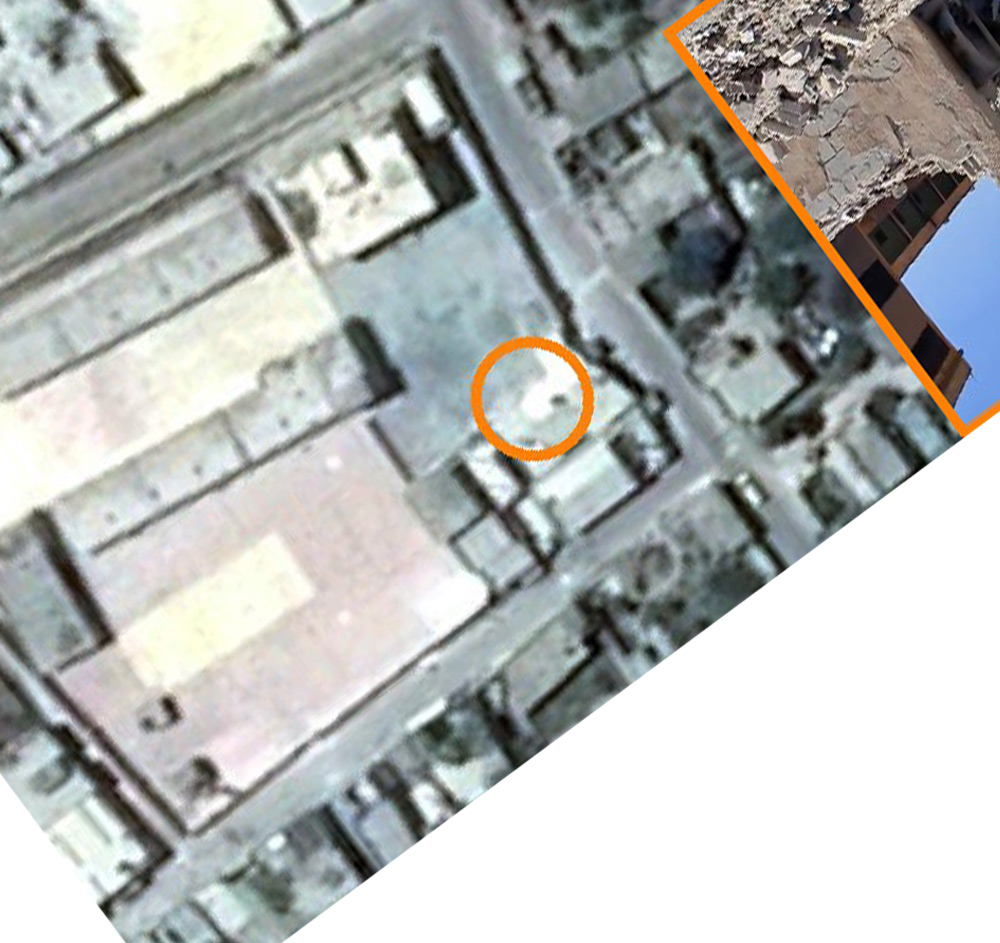 This indicates that this time the MoD likely did not lie about the date the image was taken, unlike in the case of an airstrike on a hospital in Sarmin. However, this image is still likely yet another example of data manipulation, as we will show below.

Damage on the ground

According to the Ministry of Defense, “the roof of the school is not damaged and there are no bomb craters in the area adjacent to the school”. The lack of damage of the schools’ roofs is explained by the fact that, as seen above, both bombs that hit the school grounds exploded in the yards, not on roofs. As to the absence of craters, we believe that this could be explained by the type of the munition used.

One of the videos of the airstrike on schools in Hass strongly resembles a video of a Russian ODAB-type fuel-air bomb test:

A ViceNews article on fuel-air bomb use in Syria notes that munitions of this type “are also characterized by the absence of large blast craters that accompany typical explosives of similar size.”

A video of the aftermath of an explosion of a fuel-air bomb of a caliber larger than 500 kg does not show a crater at ground zero either:

The difference of fuel-air bomb damage pattern from that of regular high-explosive bombs could also explain other irregularities noted by the Ministry of Defense.

We would like to remind that back in 2000, Human Rights Watch called on then-acting president Vladimir Putin to walk back from threats of using fuel-air bombs in the Chechen war, noting that a large impact radius of such bombs would make dropping them on residential areas a violation of international norms on indiscriminate attacks. In 2002, The UN’s Sub-Commission on the Promotion and Protection of Human Rights confirmed the indiscriminate nature of fuel-air bombs.

It should be noted that several building roofs actually were destroyed in the area around the schools, as seen in a video we geolocated and another video also geolocated by Twitter user @wasc_algonquin.

Overlaying the MoD image on a satellite map shows that the destroyed houses, by accident or on purpose, ended up at the very edge of the MoD’s image or just outside of it.

Due to the above, we would like to ask journalists reading this to request the Ministry of Defense that it releases the video or other photos (if available) from the UAV that flew to Hass. This would allow to better assess the destruction in the area adjacent to the damaged schools.

We also note that the scale of destruction in the MoD image taken the day after the bombing appears lower than in the photos and videos taken immediately after the airstrikes because the rubble was partially cleared with a wheeled loader:

Who bombed the schools in Hass?

A video published by RFS Media Office on October 27 shows a plane resembling a Su-24 bomber: 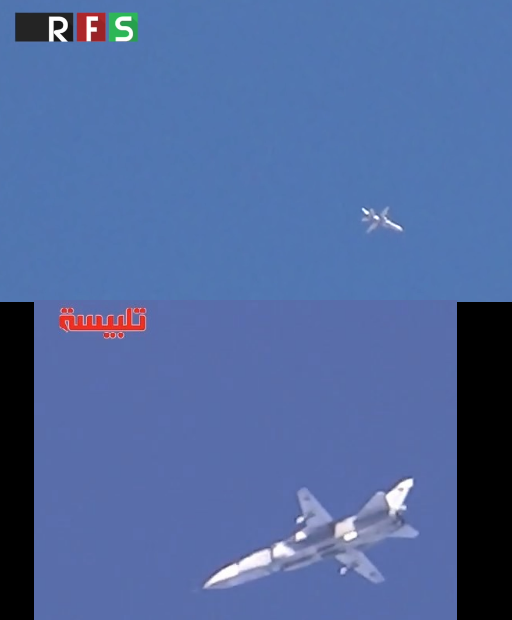 If the video indeed shows a Russian Air Force Su-24, this would debunk the Russian MoD’s statement that “none of the Russian Aerospace Forces’ planes flew into that area on Wednesday, October 26”. However, firstly, the Syrian government air force also fields Su-24s (even though they, as a rule, don’t fly with a low wing sweep angle). 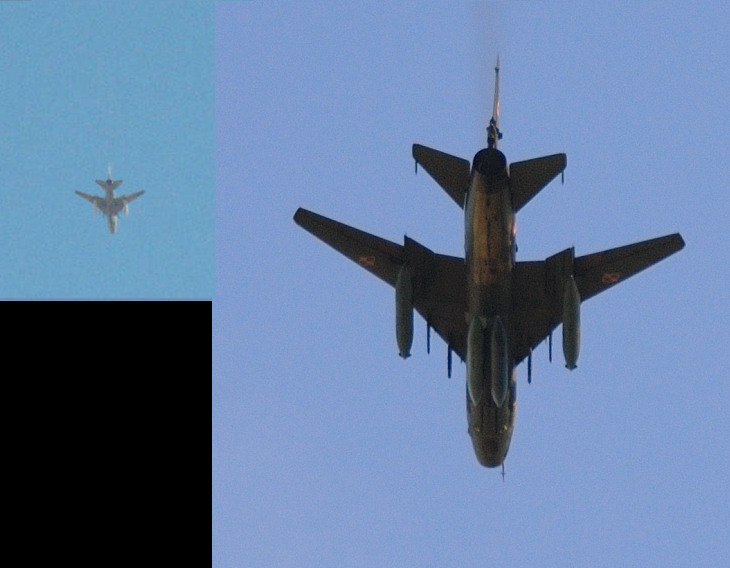 Left: a plane in the air above Kafr Nabl; right: A Polish Su-22 (source)

The resposibility of Syrian Su-22s for the airstrikes on schools in Hass is also confirmed by a report from “Sentry Syria”, an organization tracking pro-Assad aircraft and issuing early airstrike warnings. The report provided to our team indicates that on October 26, at 10:49 and 10:59 AM local time, two Syrian governmnet Su-22s took off from Shayrat military airbase in Homs governorate to conduct airstrikes on Hass at 11:00-11:30 AM local time.

Screenshot from a “Sentry Syria” report provided to our team.

Check out this new pic of SyAF Su-22m4 , just recently got very active again ,each armed with 6 bomb pic.twitter.com/tK18WLbeFM

The photo shows ODAB-500PMV fuel-air bombs under the plane’s wing: 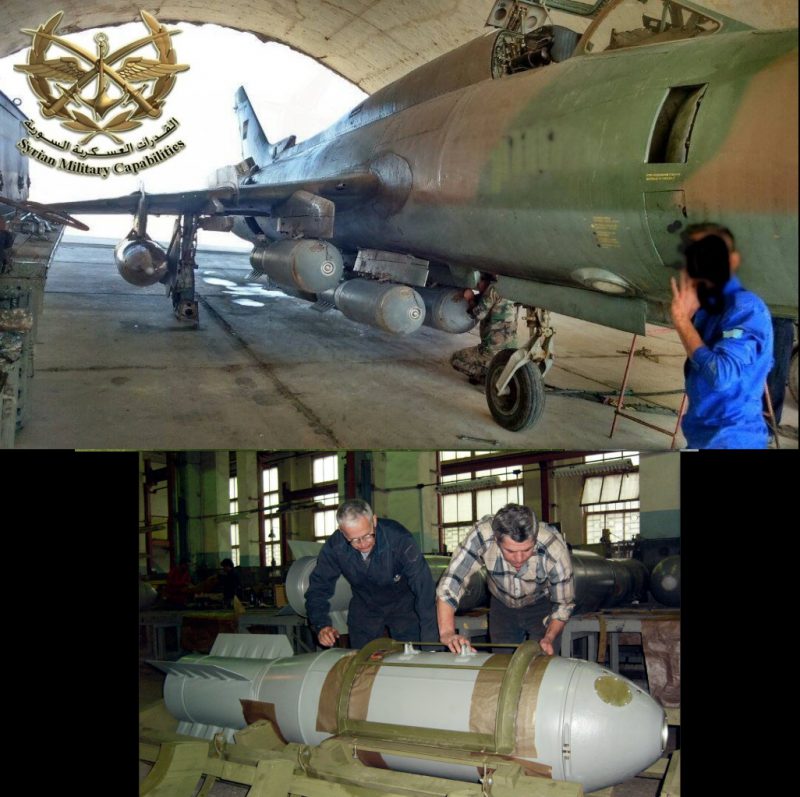 Top: a Syrian Su-22 with bombs under its wing; bottom: an ODAB-500PMV fuel-air bomb (source)

Shayrat military airbase has aircraft shelters similar to the one in the photo above (Google Maps link): 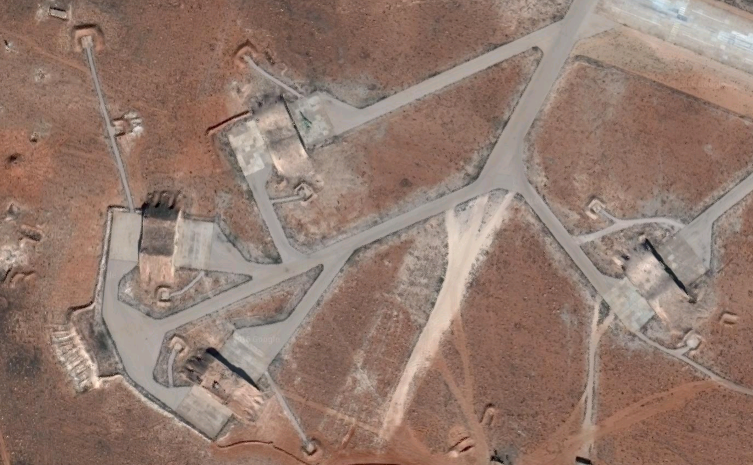 It should be noted that Russian military did not deny Syrian aircraft being present in that area (as opposed to Russian aircraft).

The Russian MoD’s statement that “At this time, Russian means of air control followed in that area an American remotely piloted aerial vehicle MQ-1B Predator” can be neither confirmed nor debunked since the MoD did not provide any evidence supporting this claim.

On October 26 both Syrian and possibly Russian aircraft were present near Hass. There is reason to believe that the attack on schools which killed dozens of children was perpetrated by the Syrian government air force, namely Su-22 bombers which dropped what appears to be ODAB-type fuel-air bombs. However, footage of a Su-24 above the airstrike site does not allow to exclude the possibility of the Russian Air Force being responsible for this attack.

The analysis of the event presented by the Russian Ministry of Defense is at best superficial and at worst constitutes a deliberate attempt to present misinformation to the Russian public and the world. For instance, several cases of airstrikes impacting residential buildings adjacent to the schools were ignored by Russian military, either accidentally or due to negligence. These impacts were left out of the MoD imagery even though they should have been filmed or photographed by the UAV which flew to the impact site.

Thus, we would like to once again call on the Russian Ministry of Defense to release all photos and/or footage taken by the UAV on October 27 in or near the town of Hass. A refusal to do so could only be regarded as an attempt to hinder an independent investigation of the incident, which would contradict the call of the UN Security Council from October 29 which was joined by Russia as well.