On September 13, the Russian Ministry of Defense held a briefing on the status of the Russia-US agreed Cessation of Hostilities in Syria which came into force the previous day. During the briefing, the Ministry’s spokesman Igor Konashenkov claimed the rebels had violated the CoH dozens of times. During a live conference with Russian and Syrian servicemen on the Castello road in north Aleppo, their checkpoint was allegedly attacked by rebels. The briefing’s footage shows the shooting starting at 05:26:

This same moment was filmed by REN TV channel crew:

It was also filmed by a state-owned network Rossiya-24:

However, we believe all 3 videos look staged. At 0:30 in the Rossiya-24 segment, a man dressed in white is sitting calmly in a chair, despite the shooting that has started and a reporter running past him: 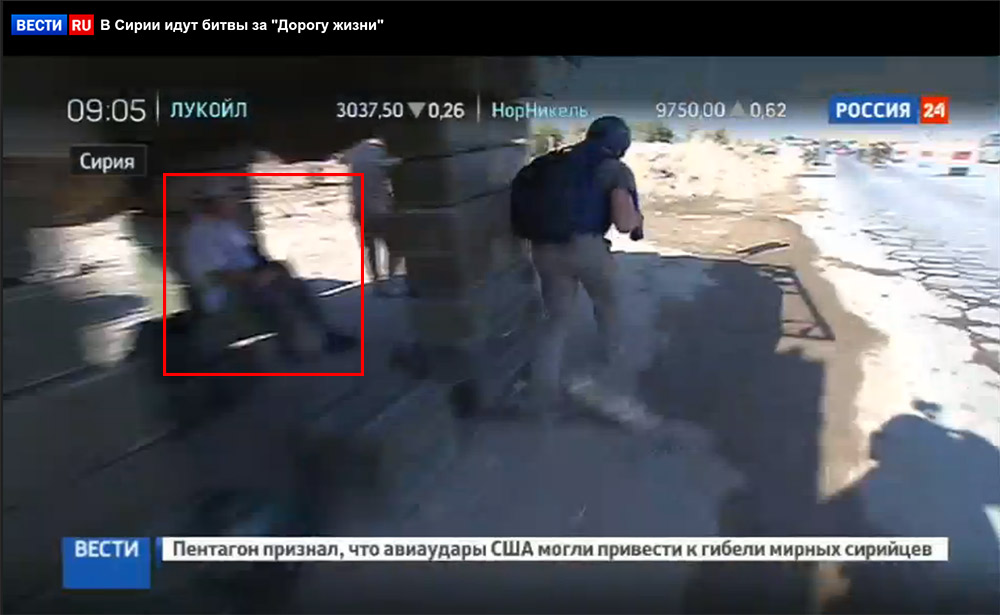 The “shelter” he is sitting in could be sturdy enough. However, why doesn’t the Rossiya-24 reporter run inside that shelter but proceeds to the berm? Moreover, he positions himself at the berm so that he is fully exposed to the supposed enemy’s fire. Judging by the RPG’s direction of fire, the berm is perpendicular to the enemy’s line of advance: 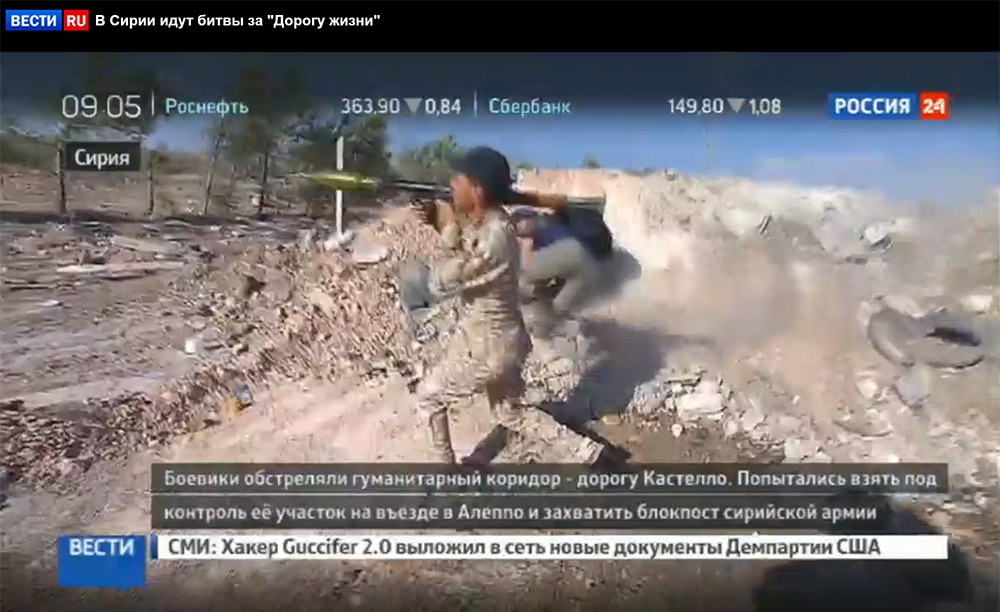 At the very next second of the report, at 0:41, we hear a command in Russian «Давай!» (“Go!”) addressed to the RPG operator, even though the latter seems to be a local, not a Russian fighter. None of the videos shows footage of the alleged enemy or any objects the Syrian soldiers are shooting at.

After the “shooting” footage, the Rossiya-24 reporter shows the road and shell remains, claiming that “terrorists are shelling the road with mortars”: 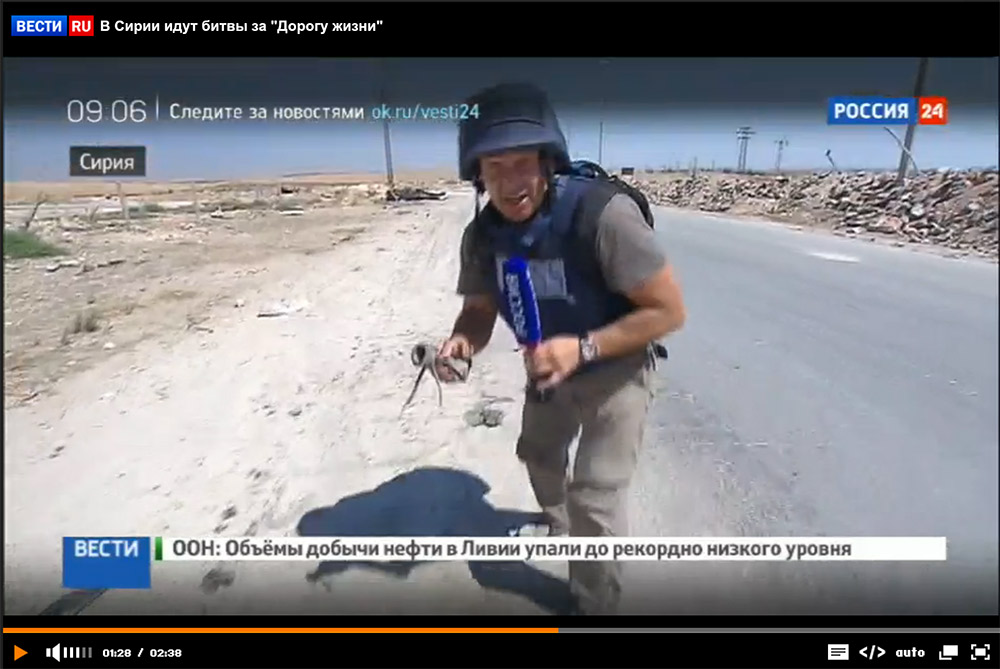 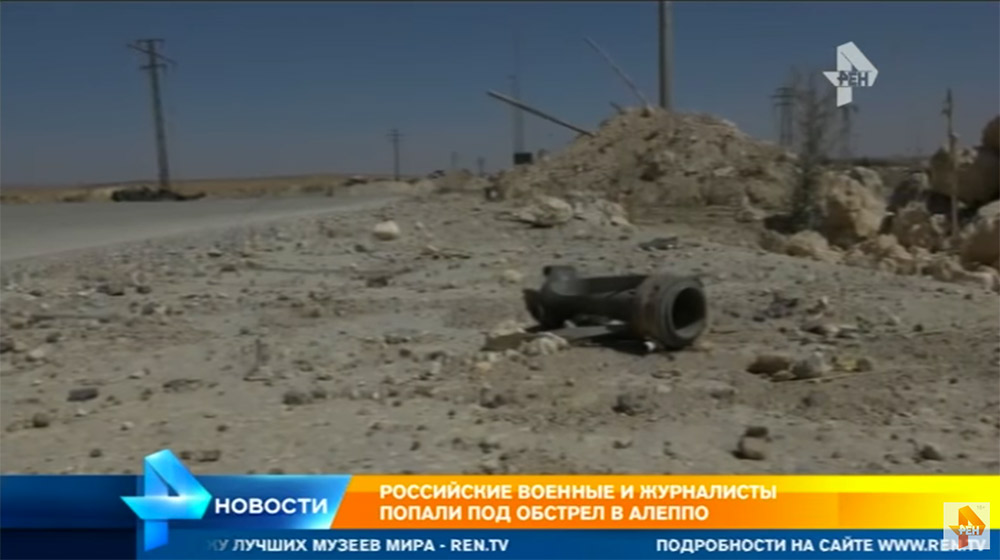 Is this the same shooting?

We believe that the Russian MoD briefing, REN TV and Rossiya-24 reports show the same shooting because of the following. 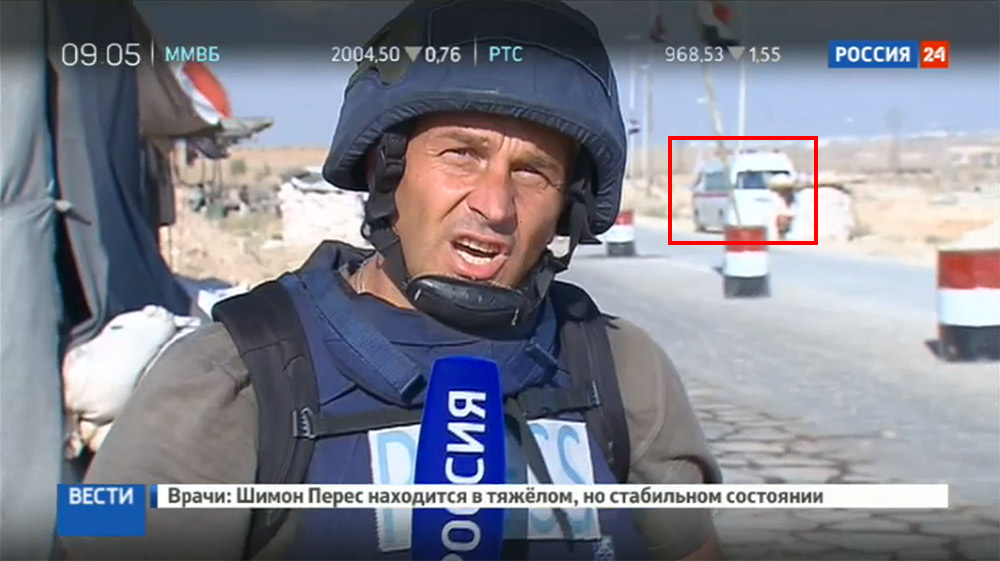 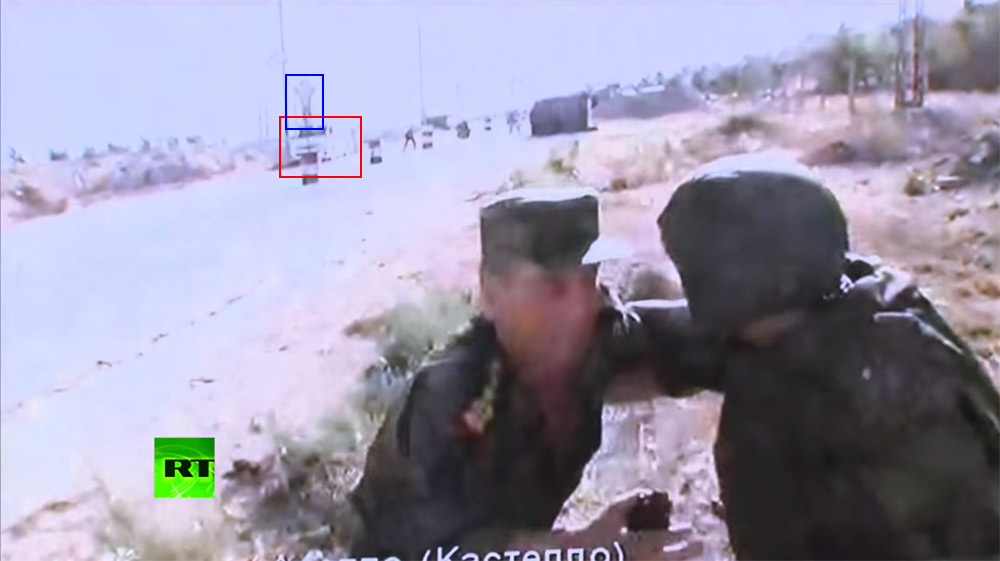 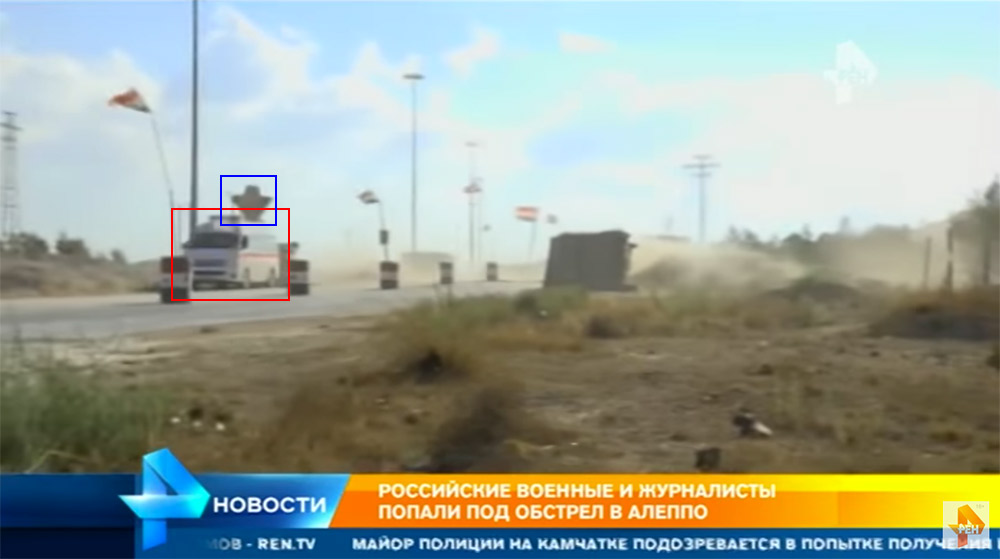 Two of the videos show a uniquely-shaped water tower (marked in blue). The time between the first shot and the RPG firing in the Rossiya-24 and MoD footage is also identical: in the Rossiya-24 video the first shot is fired at 0:24, while the RPG is fired 17 seconds later at 0:41. In the MoD briefing video, the first shot is fired at 5:28 and the RPG can be heard at 5:45. the same 17-second gap between them. The general area in all 3 videos also looks the same, which means they all show the same “shooting”.

It should now be noted that the “shooting” interrupts both the Rossiya-24 report and the Russian MoD briefing. We believe it is practically impossible that the timing of 3 separate events (the Rossiya-24 filming, the MoD briefing and a “rebel attack”) would coincide so precisely.

Based on the Russian MoD’s information, we know that the shooting happened on Castello road. The unique water tower in the videos allowed us to perform a precise geolocation of the “shooting”: 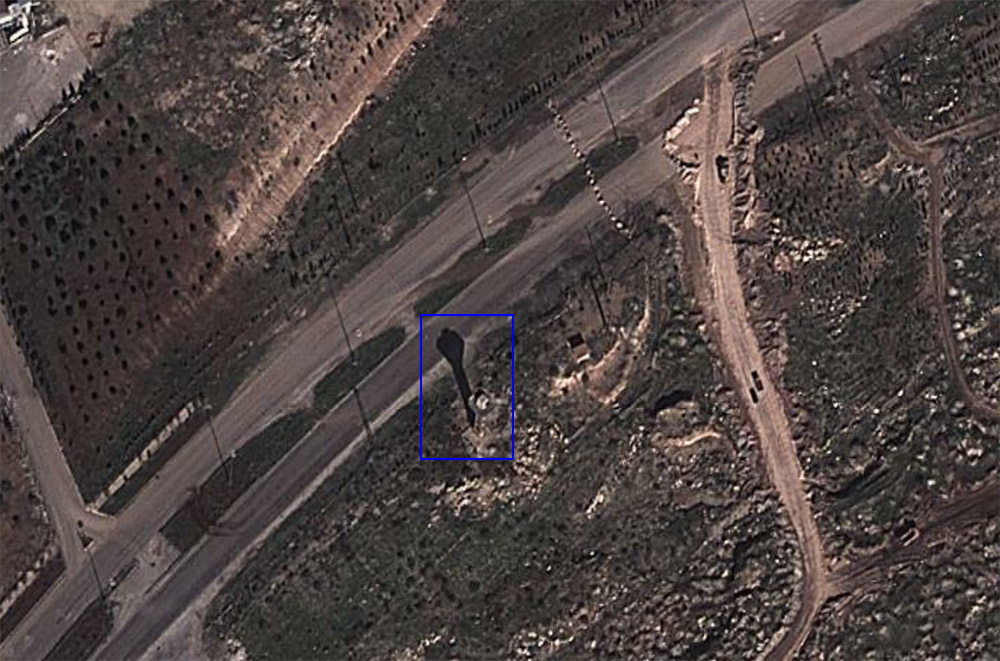 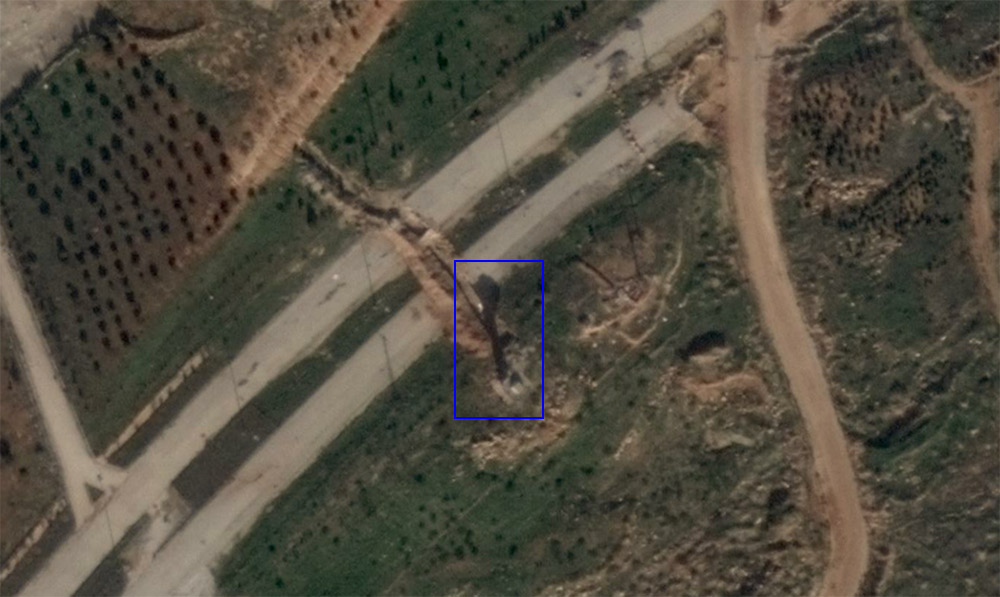 In the videos, the Syrian soldiers are firing in the direction to the north-west of the checkpoint. However, the closest rebel positions are a kilometer to the west and south-west from the checkpoint. To the north, pro-regime forces control territory for dozens of kilometers: 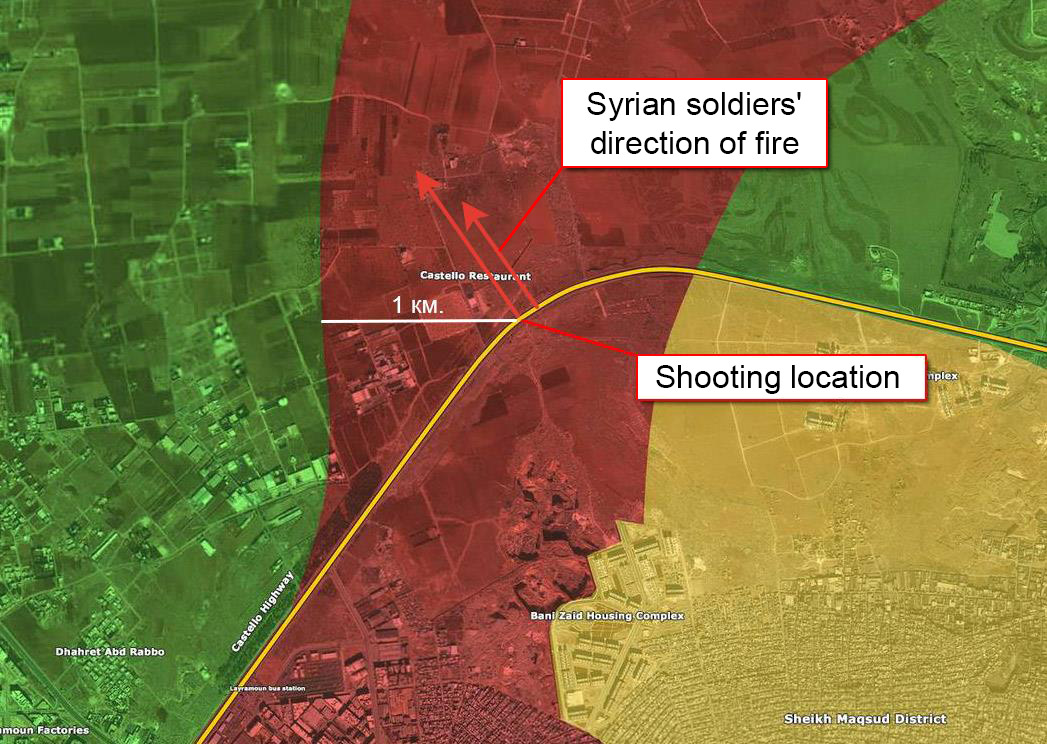 At 1:20, the Rossiya-24 segment shows a shell (or a remnant of a shell) that has penetrated the paving of the road: 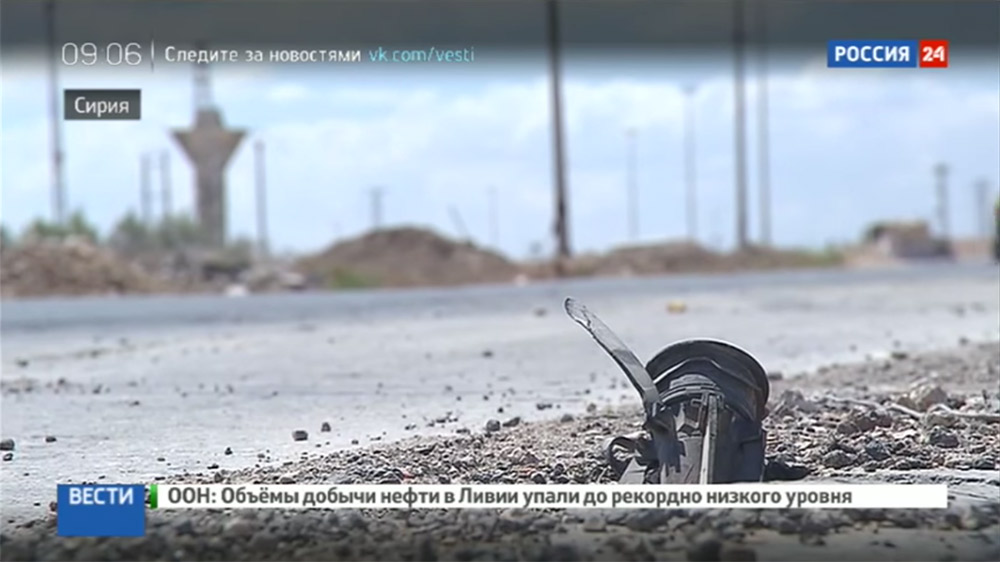 This frame shows that the shell came from the south or southwest, i.e. territory which also has long been held by pro-Assad forces: 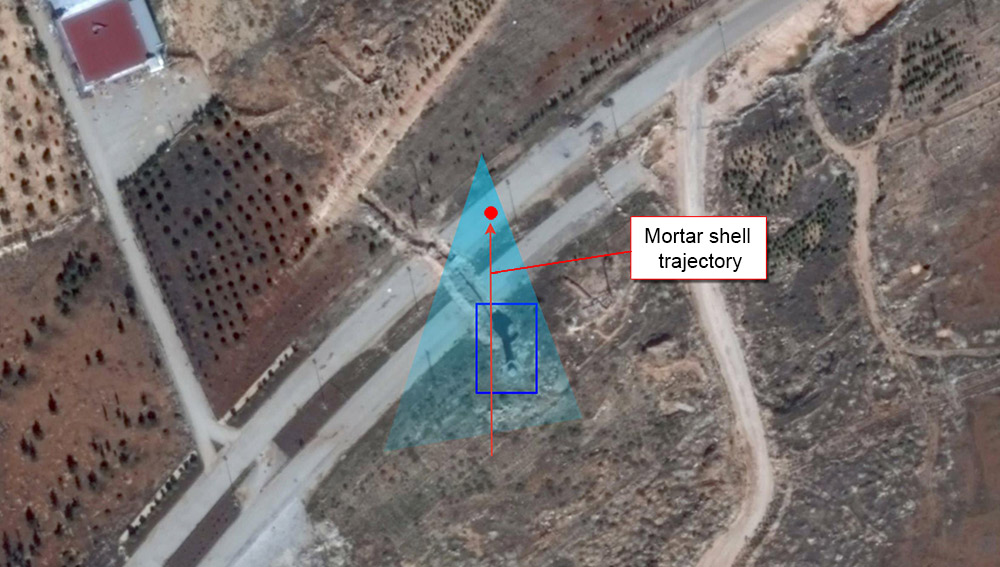 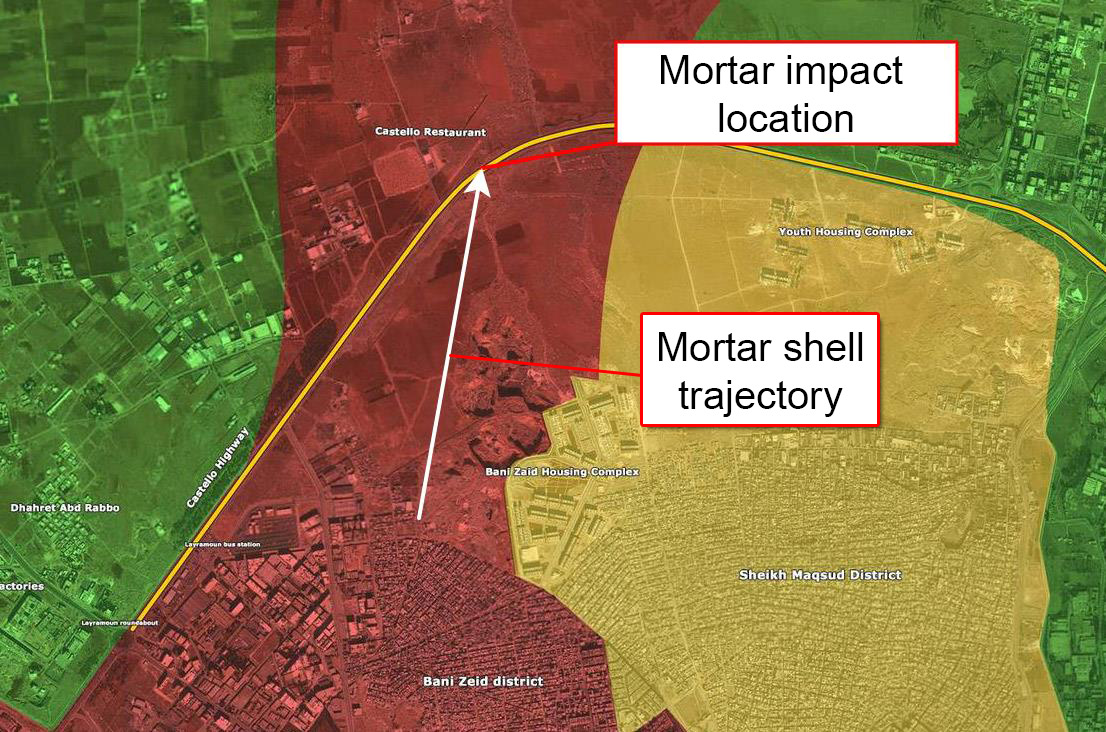 We also do not know when exactly that shell was fired. It could have been fired during the fighting in the summer of 2016 which saw pro-government forces gain control over the Castello road.

Why stage a shooting?

Showing this kind of “shooting” on the strategic Castello road allows Damascus to continue barring UN humanitarian cargo from entering Aleppo. This also could be used as leverage in Russia’s talks with the US and other parties, publicly “demonstrating” the Syrian opposition’s unwillingness to adhere to the CoH.

Finally, we would like to note that the Russian Ministry of Defense, while reporting on CoH violations by the rebels and even “showing” those violations live on air, completely ignores any facts of violations by Assad supporters, possibly including Russian forces. For instance, during the night of September 16 to 17, a video was published on YouTube depicting a Russian-made RBK-500 ZAB-2,5SM incendiary cluster bomb being dropped on or near Ter-Maela in Homs governorate:

A few months ago, the Russian Air Force violated the previous Syrian ceasefire by hitting the same town of Ter-Maela with airstrikes.