On Friday, June 16, the Russian Ministry of Defense (MoD) claimed, that on May 28 a Russian airstrike “in a southern suburb of Raqqa” killed several top ISIS commanders, possibly including the leader of the terror group Abu Bakr al-Baghdadi. The MoD also presented drone images which they claimed showed the airstrike’s aftermath:

Was it indeed a Russian airstrike, and was al-Baghdadi really killed? A closer look into the circumstances of the alleged airstrike poses a few questions which are presented in this post. 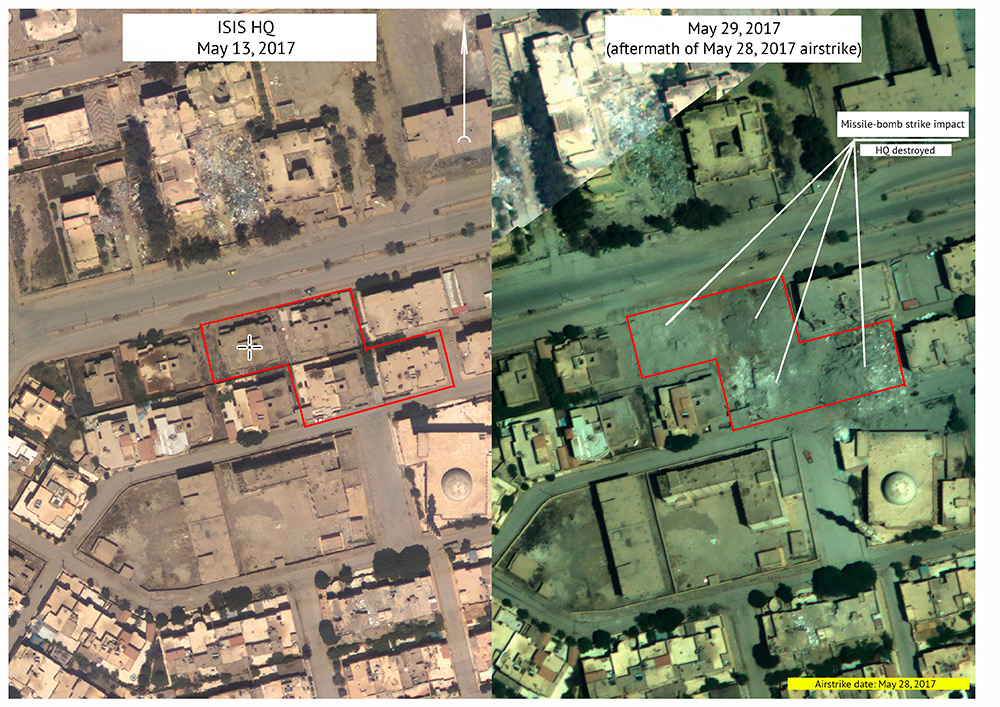 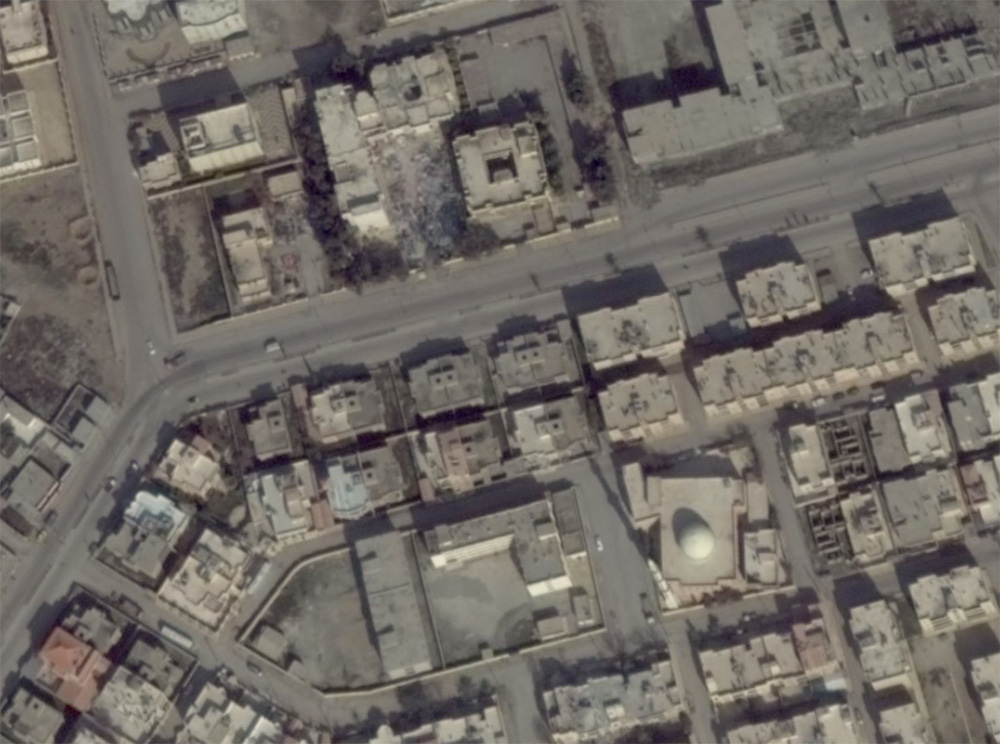 It should be noted that the place in the MoD’s images is not in a "southern suburb of Raqqa" as their own release claims, but just one kilometer west of the Old City, in a dense residential area.

Who performed the attack?

The website of Liveuamap project which tracks developments in Ukraine and Syria has only one mark indicating airstrikes or shelling dated May 28 in the area we geolocated. However, it states these were performed by the international anti-ISIS coalition or Kurdish YPG militias storming Raqqa. 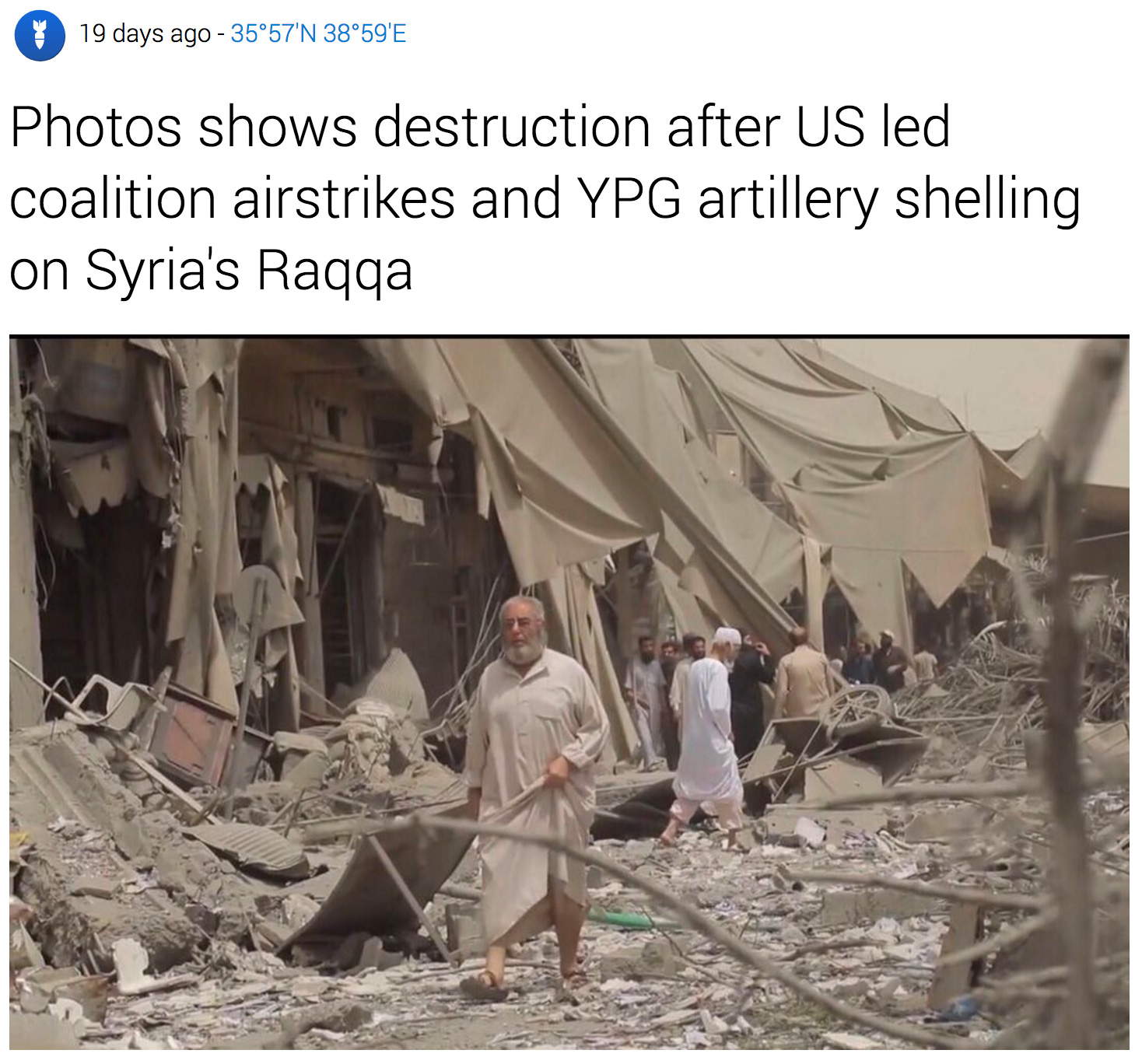 We traced the origin of this message to "Raqqa is being slaughtered silently" activist group monitoring war crimes by ISIS and its enemies against the people of Raqqa and the surrounding area. In the early hours of May 29, the group posted photos on their Facebook and Twitter profiles showing the destruction caused by Coalition airstrikes and Kurdish artillery shelling (the latter likely means 155-mm howitzers of the United States Marine Corps supporting the YPG/Syrian Democratic Forces, which, to the knowledge of our team, do not have their own field artillery):

2- Photos show the destruction because of the artillery shelling by #YPG on #Raqqa city"Almror-Alnoor-Alqwatli"neighborhoods yesterday night pic.twitter.com/5SGLoyYAqE

We have geolocated some of the photos published by the activists. It turned out they show the same place that was marked in the MoD imagery. 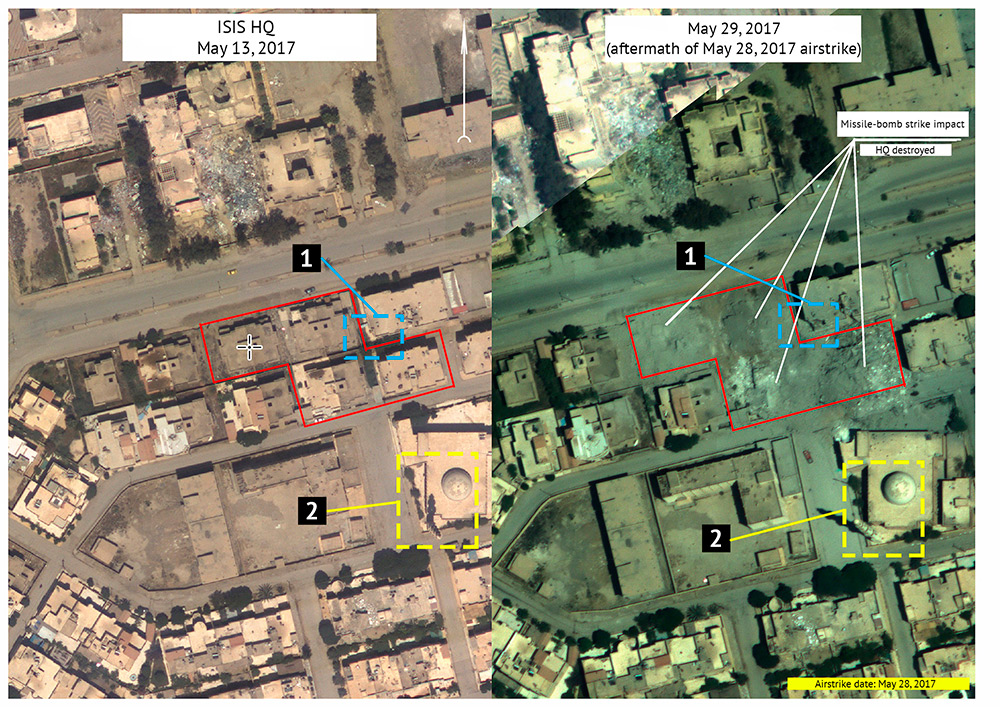 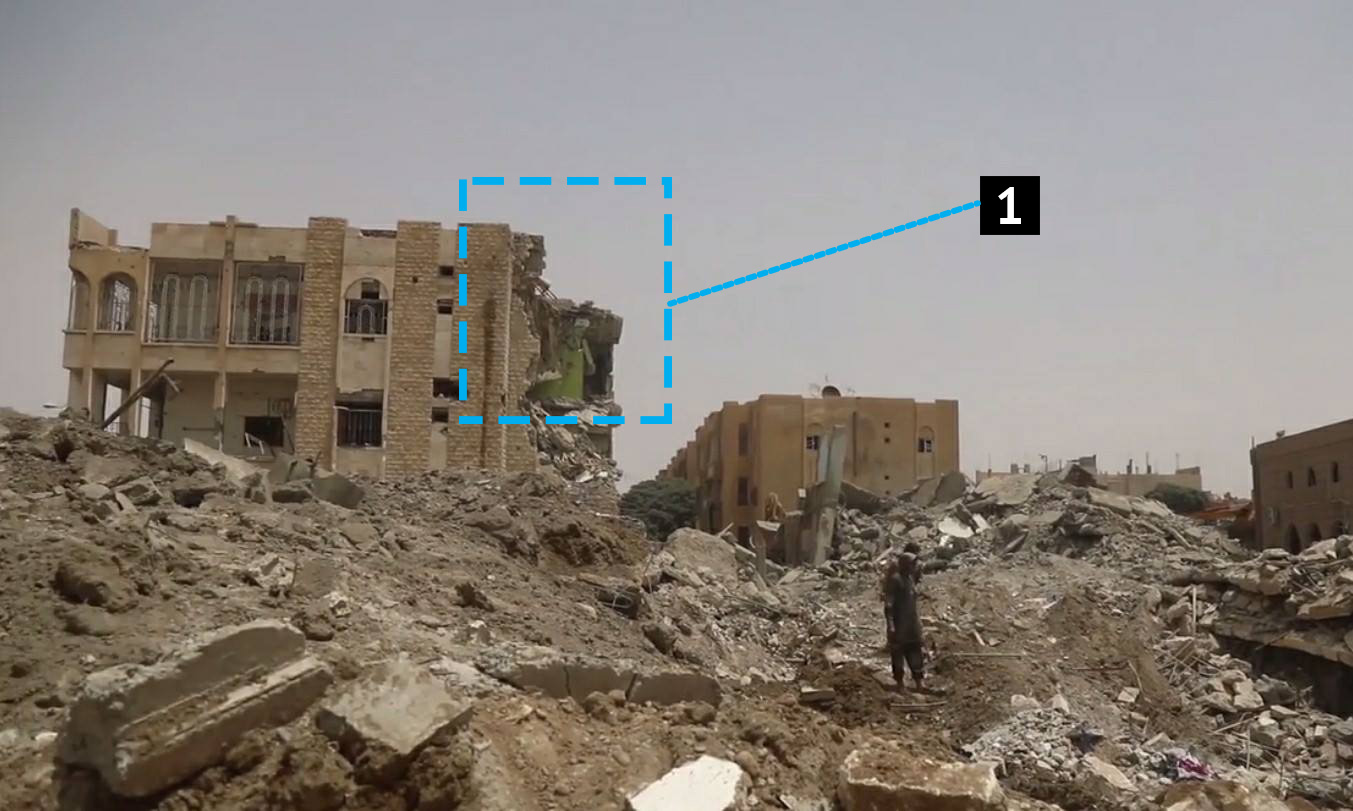 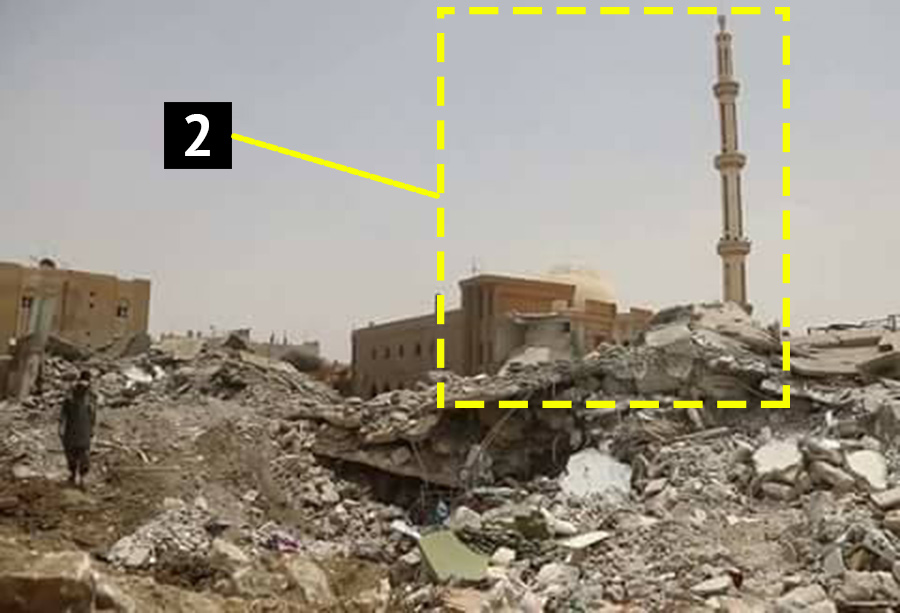 The presence of rubble in the photos and its absence in the MoD imagery is likely explained by the fact that the rubble was cleared during the time passed between the moments captured by the activists’ photographs and the MoD’s images. We have seen a similar situation when we looked into airstrikes on schools in Idlib governorate.

Thus, we can be sure that local activists believe the international coalition and/or Kurdish militias were responsible for the strike the aftermath of which is shown in the Russian MoD’s imagery. However, this in itself does not prove this was not a Russian airstrike. There are known cases when activists on the ground wrongly determined the party responsible for an attack. For example, a US airstrike on a mosque in Aleppo which killed civilians was initially blamed on the Russian Air Force. In this case, the opposite may have occured.

It should also be noted that the "Raqqa is being slaughtered silently" activists did not report the deaths of 30 ISIS commanders or 300 rank-and-file militants claimed by the Russian MoD.

The situation could be clarified by the MoD publishing the airstrike’s video or a comment from the US representatives, which, according to the MoD’s statement, were "notified in advance via established channels of the time and location of Russian Air Force activities".

There are certain doubts that he was. For example, Washington Post’s Middle Eastern reported Louisa Loveluck, when commenting on the MoD statement, claimed the ISIS leader was believed to have left the area some time ago:

Russian army claims it *might* have killed ISIS leader Baghdadi in airstrike last month. He's not believed to have been in area for a while. https://t.co/I4hYM83ndZ

In a conversation with Conflict Intelligence Team, the journalist said that her sources of this information were diplomats and experts monitoring the "Islamic State" group.

Back in March 2017, when Coalition-backed Kurdish and Arab militias were just approaching Raqqa’s suburbs, New York Times reported citing a US defense official that part of ISIS leadership had left Raqqa for their other strongholds in Syria and Iraq.